How did the Koch brothers — Charles and David Koch, who are, respectively, the sixth and seventh wealthiest people in the world — become the Koch brothers, founders and funders of a vast right-wing message machine? Why aren’t they buying their own islands or hanging out at the Kentucky Derby, instead of  pressuring politicians to vote against carbon taxes and spending ever-increasing amounts of money on local and national elections?

Born into another era, or another culture, the Kochs would have been eccentric cranks, operating out at the fringes of political theory. Instead, they’re the leaders of a political machine that has over three times the employees and more funding than the Republican Party. They spent an estimated $122 million in the 2012 election, and $290 million more in 2014; they’ve earmarked $889 million for the upcoming presidential race. How has America come to produce these billionaires, instead of the kind who start by oppressing people but then build a bunch of libraries?

If you want to answer these questions, you won’t find a better starting place than Dark Money, a new history of the Kochs by Jane Mayer, an investigative reporter at the New Yorker. The reviews have understandably focused on the most indelible details Mayer has unearthed from the Koch past — particularly the stern German nanny with a policy of mandatory enemas for those children who didn’t master her toilet-training regimen. (The nanny quit in 1940, when Charles was 5, to return to Europe and help celebrate the Nazi conquest of France.)

They’ve also focused on Mayer’s discovery, after she published an article about the Kochs in the New Yorker, that the Kochs hired a group of “half a dozen or so” investigators to attempt to discredit her and her reporting. “Dirt, dirt, dirt” a source tells her. “If they couldn’t find it, they’d create it.” 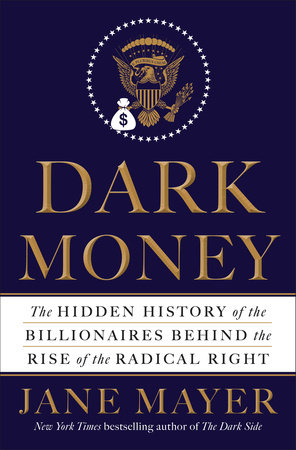 If the Koch brothers went digging for dirt on Mayer, what Mayer found on the Kochs was more like an entire soil ecosystem. Reading Dark Money, I kept thinking about alternative-history timelines — like those kill-Hitler-as-a-baby scenarios, but without the infanticide. What would you have to change for the world to end up with different Kochs? With the help of Mayer’s book, here’s what I’ve come up with:

I’m not sure how you could do this, but if you’re smart enough to build a time machine, I’m sure you can figure that part out, too. The oil connection goes back to Fred Koch, father to Charles and David, and a talented refinery engineer. In 1935, he supervised the building of a refinery in Germany for the Third Reich that proved critical to Nazi military aspirations — until the Allies bombed it to smithereens (along with several thousand civilians living in Hamburg) in 1944, possibly with fuel produced by other refineries set up by Fred for the Allies.

Fred was far from the only American businessman doing business with the Reich, but still, it was pretty obvious what Hitler was up to — he had already dissolved Germany’s government and declared himself supreme leader a year earlier, and the refinery was one of the few in existence that could produce the high-octane fuel necessary for fighter planes.

The Kochs have preserved this practice of profits-before-ethics down through the decades. The environmental policies they’ve pushed — the defunding of the EPA, the opposition to a carbon tax — all tie back to the Koch bottom line. The “crown jewel” of the Koch brothers inheritance is the Pine Bend Refinery in Rosemont, Minn., which Koch Industries owns a majority share in. Here’s how Mayer describes Pine Bend:

Pine Bend was a gold mine because it was uniquely well situated geographically to buy inexpensive, heavy, “garbage” crude oil from Canada. After refining the cheap muck, the company could sell it for the same price as other gasoline. Because the heavy crude oil was so cheap, Pine Bend’s profit margin was superior to that of most other refineries. And because of a host of environmental regulations, it became increasingly difficult for rivals to build new refineries in the area to compete.

Which is to say that from the beginning, the Koch brothers fortune has been based on keeping some of the most-polluting oil in existence a profit-making asset.

Go back to 1909 and stop charitable trusts from ever happening

Also tricky, but you’ll have Teddy Roosevelt’s help. When the first charitable private foundation was established in 1909, by John D. Rockefeller, Roosevelt was among those opposed. “No amount of charity in spending such fortunes,” said Roosevelt, “can compensate in any way for the misconduct in acquiring them.”

Congress denied Rockefeller a charter, but he managed to get one from the state of New York. By 1930, there were approximately 200 private foundations. By 1950, there were 2,000, and by 1985, there were 30,000. Today, they control assets of over $800 billion in the U.S., but remain rare elsewhere. Mayer describes them as “peculiarly American organizations, run with little transparency or accountability to either voters or consumers yet publicly subsidized by tax breaks.”

Before Fred died, he set up an elaborate “charitable lead trust” that enabled him to pass on his entire estate to his sons without any tax hit, so long as his heirs donated the interest on the principal to charity for the next 20 years.  Without this mandatory, self-interested charitable giving, the Kochs might never have developed the labyrinthine collection of charitable, educational, and political organizations that they help subsidize.

As Mayer puts it, “The tax code turned many extraordinarily wealthy families, intent onto preserving their fortunes, into major forces in America’s civic sector.” In giving away the interest on their inheritance, the Kochs also came away with the political and social influence that comes with having a lot of money to burn.

In 1972, W. Clement Stone, an insurance magnate, gave $2 million (about $11 million in today’s dollars) to Richard M. Nixon’s presidential campaign. At the time, the donation seemed so outsized that it contributed to widespread support for an array of post-Watergate campaign finance reforms. The power that the Kochs have to affect elections is directly related to the erosions of those reforms under successive blows from the courts: Buckley v. Valeo, a 1976 Supreme Court ruling that struck down limits on independent expenditures; the 2010 Citizens United ruling; and 2014’s McCutcheon v. Federal Election Commission.

Go back in time and make sure that engineers get a grounding in the humanities, too

Fred Koch may have been a good engineer, but when it came to human society, he had a hard time weighing available evidence and coming up with the most logical conclusion. Instead, he loved conspiracies, no matter how improbable. He was one of the 11 founding members of the John Birch Society, which devoted itself to fighting communism, civil rights, and fluoridated water. A pamphlet the senior Koch published in 1960 gives a more fine-grained sense of his personal worldview: Titled A Business Man Looks at Communism, it laid out the theory that welfare was a secret plot to draw black people from rural areas into the cities, where they would proceed to start a race war. “The colored man looms large in the Communist plan to take over America,” he wrote.

Charles Koch has two engineering degrees from MIT. But he became obsessed with (and a major supporter of) a place in Colorado Springs called the Freedom School, which taught a free-market based revisionist history where the robber barons made America awesome, until Roosevelt’s New Deal and Lyndon Johnson’s War on Poverty came along and ruined everything. “It was a stew pot of ideas,” Gus DiZerega, a friend of the Kochs who took classes at the Freedom School in the ’60s, told Mayer, ” but if you grew up with more money than God, and felt weird about it, this version of history where the robber barons were heroes would certainly make you feel a lot better about it.”

Charles was part of a group that was galvanized by the Powell memorandum — a call-to-arms by lawyer (and later Supreme Court Justice) Lewis Powell that urged conservatives to seize control of American education from liberals with the aid of wealthy donors building their own network of educational institutions and scholars. Charles bankrolls Youth Entrepreneurs Academy, which funds economics classes at public schools, and the Institute for Humane Studies, a think tank located at George Mason University, where Charles used his sway as chair to mandate practices like running the essays of prospective scholars through a computer to count the number of times they mentioned Ayn Rand and Milton Friedman.

Since time travel is still hard, it’s safe to say that — even if Charles has an epiphany tomorrow that directs him to spent all his money on dinosaurs and ballet, instead of dinosaurs, ballet, and midterm elections — we would have something like Charles Koch, anyway. That, for me, was the big takeaway from Dark Money:  The rise of the Kochs as a force in politics is less about their diabolical cleverness and more about the system. The conditions in the American ecosystem are just too suited to growing people like this at the billionaire level — Nazi nanny or no Nazi nanny.

Without bigger changes in the system, we’re stuck with these business-powered plutocrats. Before there were oil despots there were rail despots, and if we’re not careful, we’ll wind up with renewable despots, too — which might be an improvement for the climate, but not so much for a well-functioning republic.