In old films about Richmond, Calif., MacDonald Avenue is a bustling pedestrian corridor. During the peak of the World War II shipbuilding boom at the docks, businesses stayed open 24 hours a day, so that they could sell groceries to people on the late shift. That was then. On a Sunday afternoon, MacDonald Avenue is a run-down looking strip of fast-food restaurants, taquerias, and four lanes of fast-moving car traffic. Also, today: one brass band.

The band is the brainchild of the Richmond Progressive Association (RPA) – an eclectic group of community organizers who have, over the last nine years, managed to gain significant power in local politics. In that time, Richmond, which used to be the kind of scruffy industrial town that no one who didn’t live there had heard of, became a poster child for environmental justice. The RPA has showed a particular interest in the local Chevron refinery, which has a history both of dubious safety practices and of dabbling in local politics in a way that seems to work out to its own frequent advantage.

Much of the last eight years have been a cat-and-mouse game between the currently RPA-dominated city council and other, Chevron-backed political movers and shakers. The city councilors pressured Chevron into installing equipment that reduced emissions from the refinery. They tried to rewrite the city’s business tax structure so that Chevron paid a higher rate. When that didn’t work, they hired an independent firm to audit Chevron’s utility tax payments to the city, which turned out to be so low that Chevron settled with the city for $28 million.

Now that might all be coming to an end. In the last two mayoral elections – in 2006 and 2010 – RPA member and Green Party candidate Gayle McLaughlin won, in part because third-party candidates entered the race and split the vote. That’s not happening this time. What is happening is that Chevron, which put $1.2 million into defeating the RPA and electing its own candidates in 2010, has doubled down and is spending $3 million on the race this year.

This is thanks, in part, to the Supreme Court’s 2010 Citizens United ruling, which removed most limits on the money that can go into and come out of independent political campaign committees. It’s also thanks to the fact that Chevron is not stupid and knows how to do math. Spending $3 million on a mayoral race in a refinery town is small potatoes, when that same refinery town is capable of hitting you up for $28 million in utility settlements. “If they win this election,” says Tom Butt, a city council member who is running for mayor this year, now that McLaughlin has reached her term limit, “it’ll be the smartest investment they ever made.”

The contest has generated some of the most lavish and improbable political advertising ever seen in a local election. Barnes Mosher Whitehurst Lauter & Partners, or BMWL, a San Francisco-based public relations firm that often works with Chevron, has built separate negative campaign sites for each RPA city council candidate: Stopgayle.com (for McLaughlin, who is running for city council now that she’s termed out as mayor); Nojovanka.com (for Jovanka Beckels, currently on the council); and Noeduardo.com (for Eduardo Martinez, who hasn’t been elected to the council yet). 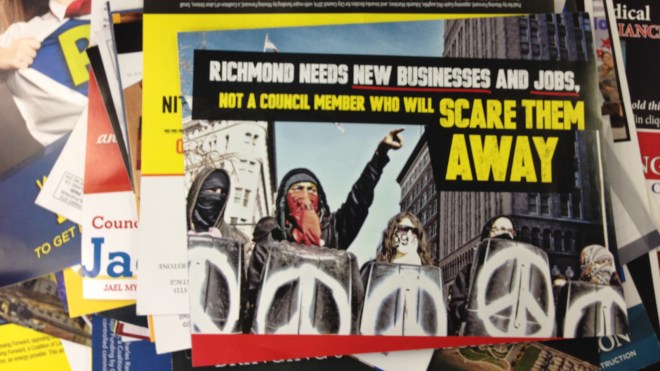 All of the BMWL-generated advertising, from the television ads to the political fliers, repeat and reinforce a negative message about each candidate. McLaughlin is always leaving town — and once she held a banner at a protest for the release of the Cuban 5. Beckels ate a $39 lamb chop while representing the city at the YMCA Reach Conference in Fort Lauderdale, Fla. Martinez “recruited people for Occupy Oakland.” Chevron is also backing two local news sites: Radio Free Richmond and the Richmond Standard. 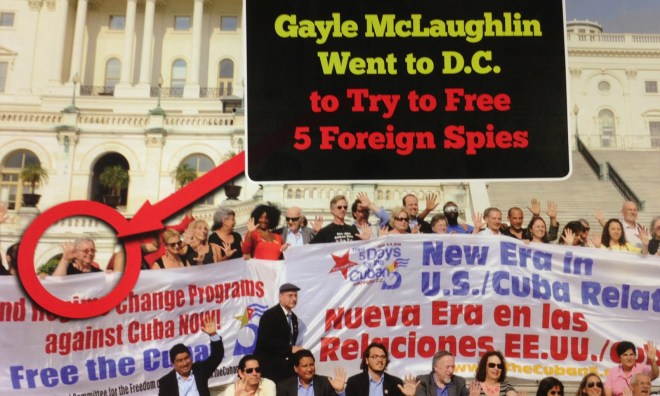 The RPA’s response to this has been pragmatic. They’ve printed up their own newspapers, along with fliers that just say “Richmond is Better Now.” They’ve gotten the most outside attention for their scuffles with Chevron — and to a lesser degree, some innovative police work and creative urban policy. But Andres Soto, one of the founding members of the RPA, guesses that — after standing up to Chevron — one of the most popular of the RPA’s moves was to stop the confiscation of cars at driver’s license checkpoints.

“I think it was a racket set up by junkyards and tow truck operators,” Soto says. “The police would set up checkpoints in Latino neighborhoods, and if you didn’t have a driver’s license, your car got confiscated.” Often, the cost of getting a car out of the yard was more than the owner could afford, and so the cars would get sold at auction, to local used car dealers — who turned around and sold them at a profit, often back to the same undocumented workers.

Stopping such a practice could easily earn you some measure of good will, and that is what the RPA is banking on in Tuesday’s election. While the idea of marching down a busy street with a brass band and a bunch of hand-painted banners sounds ridiculous, like something out of a Frank Capra movie, it actually seems to be a Frank Capra movie out on MacDonald Avenue on Sunday.

There aren’t many pedestrians, but the ones that are out smile and wave. People wander out of the businesses that line the street to see what the racket is all about. Cars drive by honking, and people wave enthusiastically out their windows.

“Is Mass out yet?” says Gayle McLaughlin to a couple of boys in perfectly pressed church wear who are chasing each other in circles on the pavement outside of St. Cornelius Catholic Church. They shake their heads no. “Well,” McLaughlin says, to no one in particular. “I was really hoping to catch the crowd as they were leaving Mass.”

That’s OK. There are plenty of other people to talk to, like the tamale vendors who are also waiting for church to let out. McLaughlin reaches for the Spanish-language pamphlets that have been prepared for just this occasion. “Hola!,” she says, and walks toward them.

Is snacking on a scorpion sexy?