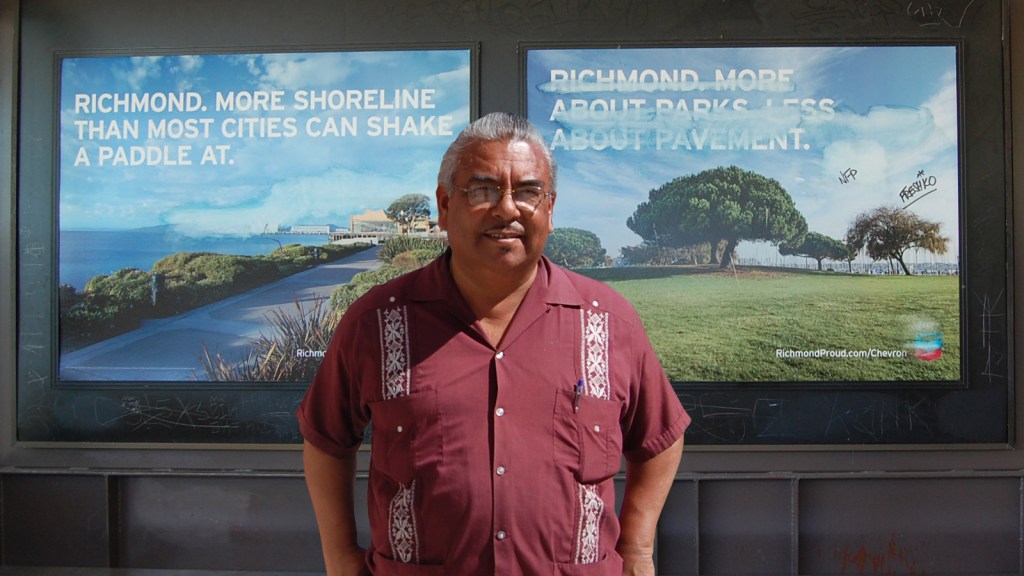 It’s a long story, how Andrés Soto became an unlikely environmentalist — and the kind of guy who knows his way around the particulars of gas storage-tank manufacture. That’s OK, because there’s a short version. The short version is: Some cops beat him up.

I’ll get to the long version later. It is a lovely day, and Soto and I are sitting in a park in Richmond, Calif., which is both the city where Soto has lived for most of his life and one that has a reputation for crime and refinery fires. The park is the kind of stark concrete plaza that’s designed by architects who secretly hate parks, but Soto is somehow making it work. When they see him, people pull over, get out of their cars, and come over to talk — usually about music.

Soto plays clarinet in a symphonic group, as well as lead alto sax in the Junius Courtney Big Band. He’s the musical arranger for a Latin soul band called Sol, and plays occasionally with local soul, R&B, and rock groups. He went to school back when band was something that schools took seriously, he says — but also when boundaries between ethnicities were breaking down and musical genres were fusing, with results like Santana and Sly & the Family Stone.

But we’re digressing. Basically, Soto explains, there are two kinds of floating roof tanks used in the petrochemical industry: closed and open. The closed tank makes it easier to capture emissions before they disappear into the atmosphere, and so that’s the one you want to pressure your local refinery into installing, even if — especially if — they send a lawyer down to the city planning commission to argue that it’s too expensive. Soto is really excited about this.

A recycling truck pulls past us and heads out of the parking lot, and Soto stares after it. “There,” he says wistfully, “goes one helluva bass player.”

When I arrived in Richmond, the first thing I saw was a sign extolling the glories of the city. The BART doors rolled open in front of me and there it was: a giant billboard of brilliant green grass and blue sky, like a computer screensaver. “Richmond,” the sign read: “More about parks, less about pavement.” Next to it, a billboard depicted a quaint waterfront bicycle path, and next to that, another billboard advertised the city’s Rosie the Riveter Museum. “Richmond Proud,” all the signs said.

Each sign displayed the logo for Chevron, the company that contributes both a third of Richmond’s tax revenue and a considerable amount of its pollution. Chevron bought up the billboard space back in 2012, after a corroded pipe at the refinery caused a fire to break out, sending 15,000 people to hospitals with respiratory problems. To add insult to injury, the fire lowered the refinery’s assessed value, carving a hole in the city budget.

The Chevron refinery is old. It’s older than the Model T, older than car culture, older than Richmond itself. It was built in 1901 around an abandoned farmhouse that an oil company scout had determined was the perfect site: near water that was deep enough for shipping traffic, and close to the terminus of the Santa Fe Railroad. The refinery’s employees lived in tents around the farmhouse until housing was built for them. Today, only 7 percent of Chevron’s employees actually live in Richmond; most drive in from the outlying suburbs.

For those interested in where climate change activism is going, Richmond offers a picture of a future that could be widespread in a few years — one where environmentalism looks more like it did in the ’70s. Back then, and now again in Richmond, boundaries between political movements are more porous, and ideas of nature and how it should be protected tangle with issues of social justice: who gets to pollute and who has to live with the consequences.

To those who spend a lot of time thinking about how to make industries that are contributing to climate change pursue a less catastrophic line of work, success has been mixed. The dream of a carbon tax — at least a federal one — is about as likely as getting a pony for your birthday. Keystone XL is a Schrodinger’s Box, poised perpetually between approval and denial. And heavy crude, which produces high emissions both at the well and when it’s refined, is still being pulled out of the ground and shipped around the county.

Suddenly, and for the first time in decades, the U.S. is building new infrastructure for shipping, refining, and storing oil, gas, and coal. Local governments have a remarkable amount of power over how — and even whether — this infrastructure will be built. Running for city council — or the local public utilities commission, or the planning commission — is looking like a sharp move for those environmentally inclined people who always thought politics was more interesting than chaining themselves to a backhoe, anyway.

Soto is one of those people. As a 5-year-old, he watched his parents tape campaign signs for John F. Kennedy to their car before election day and driving through the neighborhood, honking their horn. He liked nature and became quite the child birdwatcher; but he also liked watching the gas flares rise over the refinery in the distance.

At age 19, as a young criminal justice student at Contra Costa Community College in San Pablo, he was approached by a young German man.

“Yeah,” said Soto, not sure where this was headed.

“Would you like to help out the United Farmworkers and Cesar Chavez?” said the German. Before long, Soto found himself standing in a picket line in front of a local supermarket, urging people not to buy grapes.

Soto never moved beyond the fringes of the UFW, but the movement left its mark. “One time we’re holding up these big signs,” he says, reminiscing. “Everything is ‘Boycotting Bruce Church Lettuce.’ And there was — in those days we called them ‘hippie chicks’ — and I’m having a conversation with her. And when I told her what my career ambition was, she said, ‘Why would you do that? Don’t you know the police are nothing but the dogs on the end of the leash for the wealthy?'”

It was the beginning of the end for the criminal justice degree. Instead, Soto transferred to Berkeley to study political science — only to find that the radical professors had decamped for UC Santa Cruz, and what was left were mostly the kind of guys who palled around with Henry Kissinger. “But what I realized was,” says Soto, “that this was the education they were giving to their people. My job was to be an infiltrator to take that information that they teach their own and use it for the benefit of my community.” After school, he settled into a life of organizing on behalf of Latin American Studies programs in elementary and high schools.

Here’s what happened to get Soto to run for city council: It was Cinco de Mayo, 2002. Soto, his two sons, and a group of neighbors and their children walked up to a street that had been blockaded by the police, only to be threatened by the cops, then tackled and pepper sprayed.

The police asked Soto’s youngest son, who was an undergraduate at Berkeley at the time, what gang he was in. “I claim UC Berkeley,” he said.

Soto and his sons were arrested and thrown into a holding cell, where, gradually, other people who had been arrested the same way began to trickle in. By the end of the night, there was a crowd of about two dozen.

“So we started organizing,” says Soto. “Right there in the jail.” And right there he decided on the first move: Richmond’s police chief had to go.

Next: In part two of this story, Soto and the Richmond progressives find that winning city hall is easier than running it.