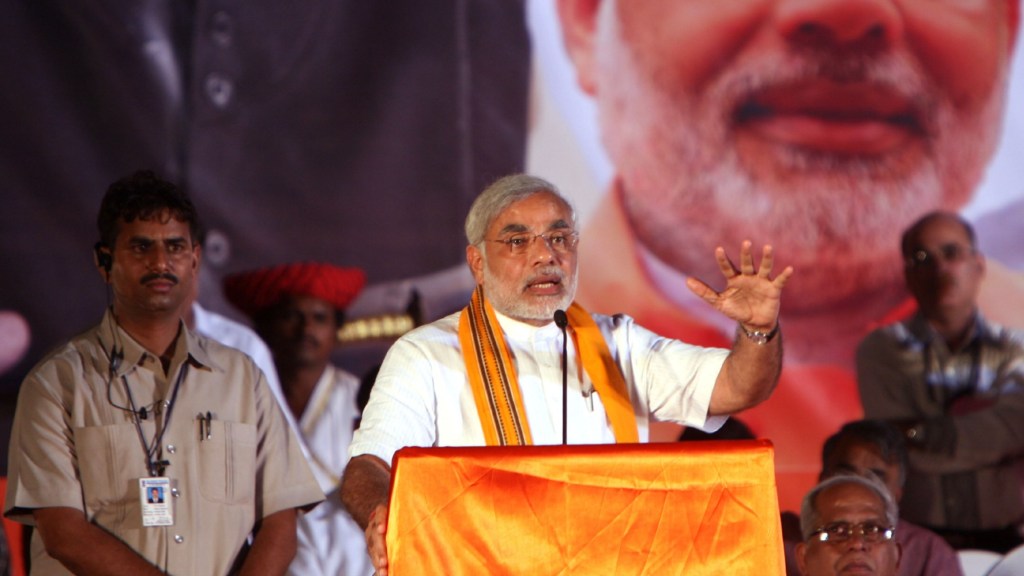 The world’s biggest-ever election just spat out a potentially worrying result. Narendra Modi, a conservative Hindu nationalist who ran on a pro-development platform, will soon be India’s prime minister. What does that mean for the climate?

An American accustomed to conservative attacks on climate science and clean energy could be forgiven for assuming that it is bad news. But not all cultures equate conservatism with profligate fossil fuel burning and utter disregard for the climate. Despite his conservative chops, Modi is talking big when it comes to solar energy.

We’ve previously told you that India is making tremendous strides in building powerful solar arrays, boosting its grid-connected solar capacity from 18 megawatts to more than 2,000 megawatts in just four years. That’s a heartening trend in a nation that depends heavily on coal and frequently runs short of power — and that has shown belligerence in the face of international pressure to curb greenhouse gas emissions.

“We look upon solar as having the potential to completely transform the way we look at the energy space,” said Narendra Taneja, convener of the energy division at Modi’s Bharatiya Janata Party, which swept to power on May 16 in the biggest electoral win in three decades. …

Expanding clean-power generation will be the administration’s top energy-related priority, especially solar because it has the potential to create jobs and supply millions of scattered households not connected to the grid, he said.

Modi, as chief minister of Gujarat state, pioneered India’s first incentives for large-scale solar power in 2009. The party will take lessons from Gujarat’s program as it designs policies on a national level that will include both larger, grid-connected photovoltaic projects and smaller, decentralized applications for solar, Taneja said.

Modi will inherit the awkward issue of a burgeoning trade dispute in which the U.S. is complaining about India’s protectionist policies that are designed to spur a domestic solar industry. India’s outgoing government has been working up a counter-complaint, arguing that America’s own solar policies violate World Trade Organization rules. It’s hard to imagine Modi’s administration backing away from this fight, particularly given that American environmentalists are on India’s side.

Modi is already not on great terms with the American government. The U.S. denied him a visa following accusations that he fueled ethnic violence that left nearly 1,000 people dead, most of them Muslims, in his home state of Gujarat in 2002, where he has served as the equivalent of a governor since 2001. But after his party won the election last week, Obama called to congratulate him and invite him for a visit to Washington, D.C. If Modi accepts the invitation, maybe he’ll get the opportunity to see the new solar array on the White House roof.