I haven’t paid too much attention to the midterm elections this year, mostly because they are depressing. Republicans are going to win the House and probably the Senate, which means two more years of fake investigations, pointless stunts, media warfare, and legislative gridlock in D.C. Whee!

Nonetheless, there’s one race that’s caught my attention. I’ve always had a mild fascination with Rep. Fred Upton (R-Mich.) not because he’s extraordinary in any way, but just the opposite: In his go-along-to-get-along mediocrity, he serves as a kind of weather vane, showing which way the wind is blowing on the right. He has tried to stay safe in the conservative herd — and now it looks like it could come back to bite him in the ass.

It’s been years since Upton has faced a credible challenge in Michigan’s Sixth District. He was elected to the House back in 1987 as a middle-of-the-road Republican moderate and won comfortably on that image for years. As late as 2007, he was teaming up with a Democratic colleague to pass a bill meant to phase out energy-wasting incandescent lightbulbs. In 2009, when everyone was pretending to care about climate, he was saying, “Climate change is a serious problem that necessitates serious solutions.”

And then, as with so many national Republicans, 2010 rocked his world. The Tea Party exploded. Upton faced a primary challenge from the right, and though it didn’t come particularly close to succeeding, it terrified him. What’s more, in 2010, he made a bid to take over the House Energy and Commerce Committee, where he’d been patiently waiting his turn. Conservatives took the opportunity to blast him for his incandescent lightbulb bill, painting him as an unforgivably moderate squish with a fondness for nanny state intervention.

Upton had to scramble to the right to placate the baying hounds, and he’s been flailing in that direction ever since, co-sponsoring bills with Sen. James Inhofe (R-Okla.) to block EPA regulation of carbon, backing a bill that would have rolled back the lightbulb standards he helped establish, and leading his committee in denying climate change. He’s become one of Big Fossil’s primary champions in Congress.

Despite his rightward lurch in a purple district (and his smaller margin of victory in 2012), the national Democratic Party, somewhat mysteriously, hasn’t put much money into challenging him. But earlier this month, the Mayday PAC — a crowd-funded PAC founded by Lawrence Lessig to elect candidates that will help reduce the influence of money in politics — put $1.5 million into the race; this week it announced it’s spending $650,000 more.

Political observers, including environmental groups, have generally regarded the campaign of Upton’s challenger, Western Michigan University professor Paul Clements, as quixotic. LCV hasn’t gotten involved. Tom Steyer hasn’t gotten involved. But with some money behind him enabling him to get his message out, Clements is surging. A new poll shows him within the margin of error: 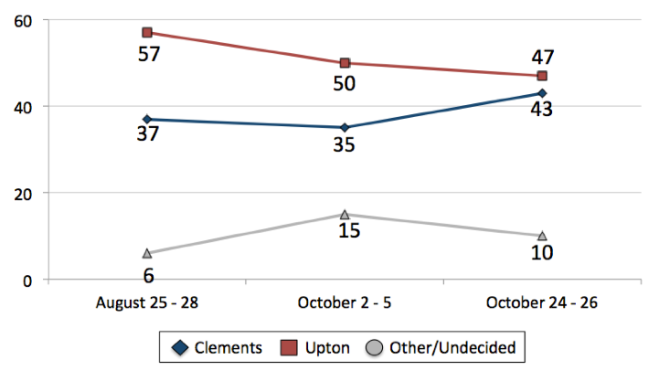 It’s a toss-up! Suddenly the media is paying attention.

For what it’s worth, Clements is a bona fide climate hawk. He has gotten the endorsement of Climate Hawks Vote, one of the few super PACs scoring candidates and organizing electoral support based purely on climate change. (Our own Ben Adler covered the group here.) Here’s an ad touting clean energy jobs:

(I love it when nerds run for office.)

Upton is panicking, so there is no doubt a tsunami of fossil-fuel money already swamping Michigan’s 6th. All Upton’s ads are now touting his independence (as belied by his slavishly conservative voting record the last four years). He’s scrambling to explain his flip-flop on climate change: