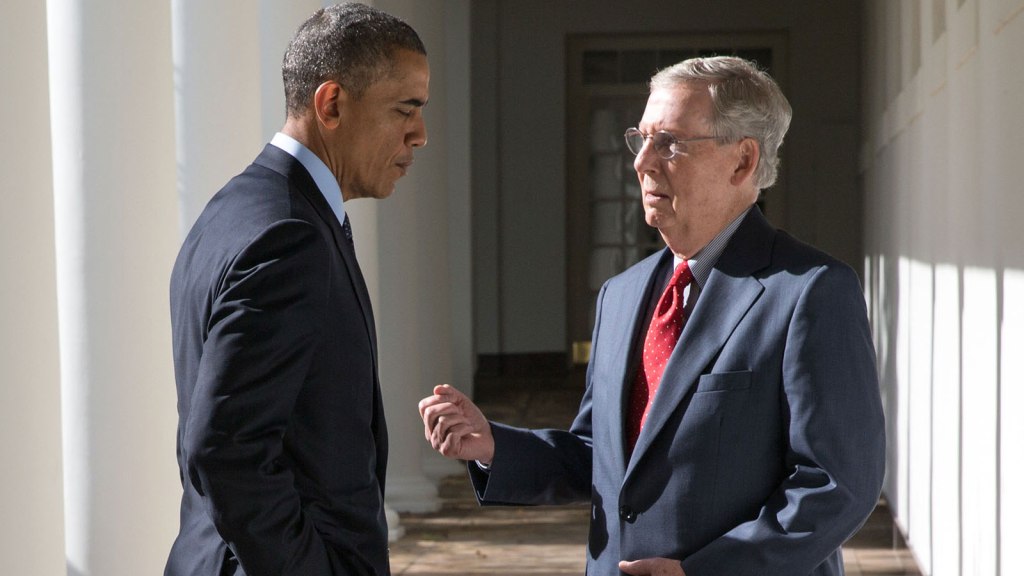 Pete Souza/White House
My offer is this: nothing

Several people have asked me to comment on the notion, flying all over political media at the moment, that Obama might use Keystone XL as a bargaining chip to trade in exchange for Republican support for … something else.

This kind of talk has been around for as long as Keystone XL has been on the political agenda. All along, Very Serious People have been sure that Obama doesn’t really care about Keystone and that he’s just waiting for the right opportunity to give it away, which will happen any second now. The fact that Obama has defied their predictions has not dented their certainty.

Now trade talk is once again in the air, kicked off by a New York Times piece citing the rock-solid “people familiar with the president’s thinking.” It’s as dumb as ever, for two reasons that ought to be obvious to anyone paying attention.

First, as Jonathan Chait says, Republicans don’t actually benefit much if Keystone goes ahead. It might be a short-term political victory, but it will quickly disappear amid the noise of politics. The right base really wants it and the left base really hates it, but the bulk of the public, whatever they might say when asked in polls, simply don’t care about it and would quickly forget it if they never heard it mentioned again. The jobs it would create, even if you believe the highest estimates, are negligible in a $17 trillion economy. It’s just not big enough to budge unemployment or wages or any macro economic indicator. If authorized, it will quickly fade from view.

And Republicans don’t want that! It’s a perfect political cudgel for them, one area where Big Money and the public are both on their side. Why would they want to let it go? It’s far more useful for them as political symbolism than as policy.

And second, as Steve Benen says, congressional Republicans don’t make deals. They just don’t. Obama spent his first six years practically begging them to deal, shrinking his stimulus, basing his healthcare bill on Romney’s, cutting public spending in the name of a deficit deal, opening up offshore areas for oil drilling, deporting thousands of immigrants, on and on. He’s offered them concession after concession and gotten absolutely nothing in return. As Matt Yglesias writes, Republicans have repeatedly been offered deals that would have secured them policies they value, but they always say no. They refuse to have their fingerprints on anything that can be construed as an Obama accomplishment, even if it means they must sacrifice their own policy aims.

And those were big deals. Keystone XL isn’t even that big. Why would Republicans offer anything in exchange? They are perfectly happy to continue using Keystone as a political weapon. They’ll attach it to every bill that passes through the next Congress and dare Obama veto, but there’s no way in hell they will offer any substantive concession in exchange. That’s just a circle-jerk Beltway fantasy.

Speaking of circle-jerk Beltway fantasies, marvel at this Atlantic piece from Noah Gordon, as fine an example as I’ve seen of center-left vacu-babble on this subject. Gordon suggests sacrificing Keystone for … well, I just have to quote the whole thing:

Could a Keystone deal avert a showdown [over the EPA’s proposed power plant rules]? Securing those EPA rules is crucial for Obama’s legacy, and Keystone’s political significance outweighs its policy impact—if approval helps protect power plant regulation, it’s worth doing for the administration. Key advisor John Podesta, whose opposition to the project is so strong he’s officially recused himself from the decision-making process, will likely be gone by the new year. The president could acquiesce on an issue two-thirds of the public supports and save the veto pen for bigger, possibly Obamacare-related fish.

Of course, approval would infuriate the environmentalists who constitute a major part of Obama’s base, not to mention Secretary Kerry, who regularly highlights the importance of tackling climate change in his public addresses. Obama would have to weigh the leverage he would gain with Republicans against the strong liberal opposition. It’s the sort of challenge that leaves no one perfectly satisfied.

Nevertheless, the Keystone XL pipeline offers a divided government the chance to show voters some progress. [my emphasis]

Good lord, is there anything solid behind this gaseous excretion? Please describe for me the series of events that would lead John Boehner and Mitch McConnell, who have ridden the War on Coal train since it left the station, who have promised repeatedly to block EPA rules, to abandon those efforts … in exchange for Keystone. Describe the sense in which failing to veto one thing “saves” a veto for something else, as though Obama has a limited supply and must dole them out parsimoniously. Show me the social science that says capitulating on a highly charged partisan issue of great importance to his base would “show voters some progress” such that it would change a single anti-Democrat vote in 2016, especially enough votes to outweigh the fury and betrayal of the left base.

There is nothing to this Keystone trade talk. It is vaporware. It serves no purpose other than to signal the Seriousness and Reasonableness of the center-left pundits eager to capitulate.

Say what you will about contemporary American conservatives, but none among them seems to suffer from this particular politico-psychological dysfunction. You never hear them eagerly musing about which of their policy goals they might sacrifice in exchange for phantom “credibility” or “leverage” or bargains that aren’t even on the table. Nor do you ever hear them granting credibility in exchange for the many sacrifices centrist Dems keep trying to make. They just bank those concessions and keep swimming forward, like a shark.

Congressional Republicans don’t make deals. If you haven’t wrapped your head around that foundational fact of contemporary U.S. politics, you shouldn’t be writing about it at all.