The latest public opinion study out of Yale’s Project on Climate Change Communication has all the usual hints of optimism we’ve seen in the Project’s many other climate reports. According to “Climate Change in the American Mind,” released this week, a majority of Americans support regulating carbon pollution from coal-fired power plants, funding research for renewable energy, yada, yada. But there’s also some chilly stuff in there:

I’d like to say I’m at least inspired by the report’s finding that the majority of Americans do think clean energy should be a priority for the federal government, but I can’t. Recent elections proved otherwise. Or at least, even if it’s true, voters have been so gerrymandered to electoral death, especially in the South, that it hardly matters. There’s not much intellectualizing we can do with those results.

Rona Fried, CEO of SustainableBusiness.com, pointed out in The Hill, after the midterms, “Poll after poll of the general electorate shows a large majority want more renewable energy, not fossil fuels,” but also provided the stat that only 49 percent want the Environmental Protection Agency to regulate greenhouse gas emissions. That means half of Americans don’t want the EPA to do this, or they just don’t know what they want the agency to do.

Those kinds of data points are discouraging to say the least. And the climate deniers have been quick to seize on them. Harry Alford, the long-time clean energy hater heading the fossil-funded National Black Chamber of Commerce, wrote a column for The Hill on Saturday claiming that the “real policy priorities of African Americans” do not include climate change, relying on a bunch of slanted polls for support.

I’m personally over all of the opinion polling. My kinda blue opinion, to quote Miles Davis, is: So what?

American and political opinion has been wrong before, and it’s wrong now. In fact, if political opinions were the end-all-be-all on matters, we’d still have slavery, Jim Crow, and lynchings. All were popular in their day, before people did the hard work of getting out to organize, educate, and smack some sense into Americans.

I’m reminded of this whenever I think of a statement made by Congressman John E. Rankin, representative for Mississippi, while stopping the House from passing an anti-lynching law. Addressing his colleagues from the northern states, those “outside agitators” who dared to introduce anti-lynching legislation, he said in 1948:

You have done more harm, just such agitation as this has done the Negroes of the South more harm, deprived more of them of homes, than anything else that has occurred since I have been a Member of Congress. And today, as I said, the time has come when [African Americans] are not needed as servants. We have three servants to take their place: oil, gasoline, and electricity.

Did you get that? He said that more than anything else, a law to stop mobs of white people from hanging, castrating, and burning black people alive caused black people to lose their homes. Oh, and that they’ve done away with the old slavery to make way for a new slavery: fossil fuels.

Some Southern senators claimed that lynching didn’t even exist, despite the fact that between 1882 and 1964, close to 5,000 people were killed in this vigilante manner. It’s tantamount to the kind of denial senators employ today on climate change. Congress failed to pass anti-lynching bills three times during that time period thanks to such denial.

Congress was able to get away with that because unfortunately public opinion was not on the side of those wishing to abolish lynching. It took decades for organizations like the NAACP and the  Association of Southern Women for the Prevention of Lynching, and people like Ida B. Wells, to sway public opinion on this. And not only in the South. In 1900, the New York Times reported that a district attorney in Colorado would not press charges against a group that lynched an African American — burning him alive until there was nothing left for a coroner to examine — because public opinion would not permit punishment.

That public was dead wrong, as was the public that refused to denounce lynching nationally. It was neither the first nor last time they would be incorrect. Let’s look at women.

When Gallup first asked the public if it would vote for a woman for president in 1937, only a third of respondents answered, “Yes!” This was 17 years after women were granted the right to vote. It’s hard to imagine there was a time when a super-majority of Americans did not want a Head Woman In Charge when, today, most can’t envision anyone in that role for 2016 other than Hillary Clinton.

But historically, Americans have been of the opinion that women are only fit for the home, and we don’t have to go all the way back to the early 1900s for that. Since 1972, the American National Election Studies center has asked:

Some people feel that women should have an equal role with men in running business, industry and government. Others feel that women’s place is in the home. Where would you place yourself on this scale or haven’t you thought much about this?

Or remember that time, in the 1970s, when over half of men, and almost half of women, believed men were more emotionally suited for politics than women? (obvs before Speaker John Boehner): 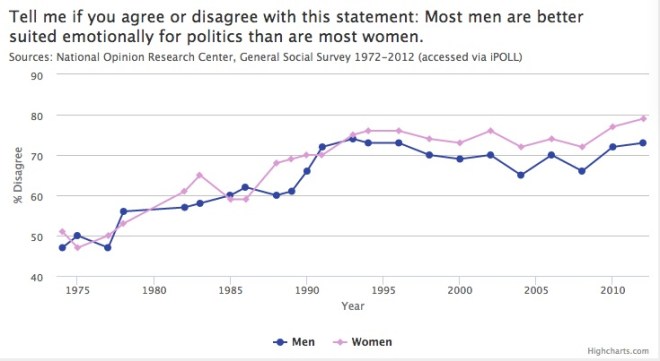 Question: “Which of these statements would you agree with: 1) White people have a right to keep Negroes out of their neighborhoods if they want to and 2) Negroes have a right to live wherever they can afford to, just like anybody else.” 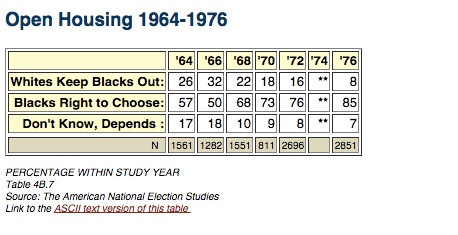 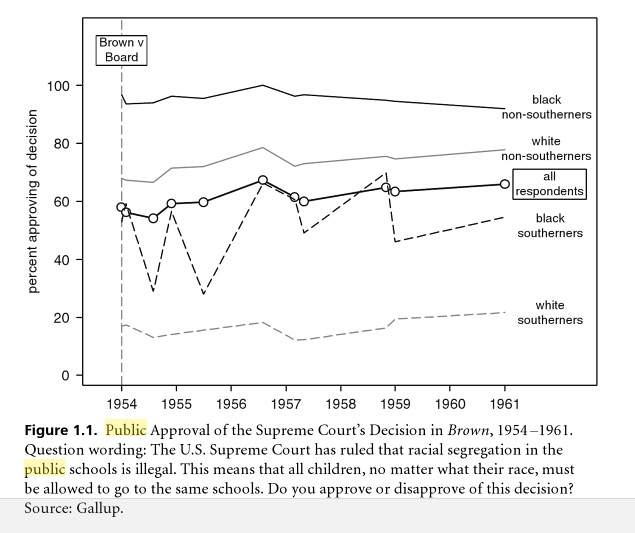 There are plenty of other issues we’ve been wrong on — interracial marriage, same-sex marriage, whether man walked on the moon. It’s cool. It often takes time for the public to catch up with reality. One thing public opinion has been consistent on is thinking politics is just too complicated for anyone to really understand, which they’ve held, give or take a few points, since the early 1950s:

Which probably explains why conservatives love making shit political. Climate change is a matter of science, and the science says we need to abolish greenhouse gases. Clean energy is a matter of common sense, which might be why almost every poll shows large support for wind and solar over coal and oil. It makes as much sense as does making lynching illegal. But turn those things into law and policy and suddenly they become controversial. Politicians start saying asinine things like these laws will make you lose your home, or make your heating bill go up. And the public eats it up because it’s too complicated to even deal with.

On climate, time and opinion may not be on our side, but that shouldn’t stop elected leaders from doing the right thing. President Obama is currently exemplifying that kind of against-the-grain leadership, much to his detractors’ chagrin. He’s doing the same for other issues that also aren’t scoring high on the public polling charts, like for healthcare and immigration.

The Pew Research Center found in a survey after the midterms that voters believe Congress will do a better job than Obama on every issue except the environment, and yet 59 percent of them want the Keystone XL tar-sands pipeline built. If Obama follows the science over the polls he won’t make many new friends, but as with many issues throughout history, I’m sure future generations will thank him later.