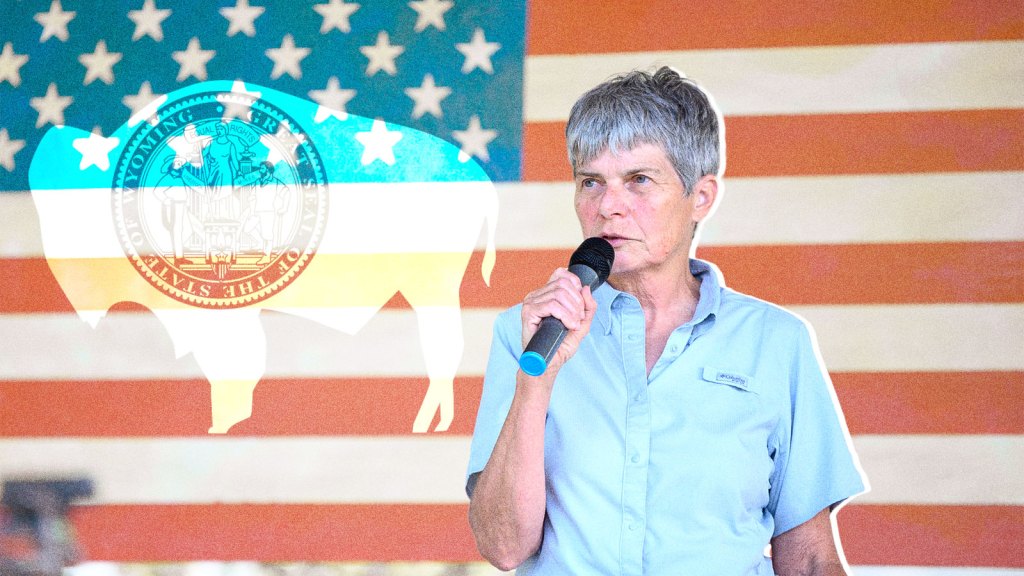 Merav Ben-David may be the most unlikely candidate to pop up in the entire 2020 election cycle. The Israel-born wildlife ecologist and Democrat is running for U.S. Senate in Wyoming, hoping to fill the vacancy left by Mike Enzi, who is retiring this year. In the most Republican state in the country, where oil, gas, and coal still form the bedrock of the local economy, Ben-David is running on a platform of “future-proofing” Wyoming for the transition to clean energy.

If she pulled it off, she would be the first female scientist ever elected to the chamber, not to mention the first senator with expertise in climate change.

“We need science in politics,” she told Grist, echoing her campaign ad. “Being on the sidelines and trying to tell policymakers what to do goes just so far, as we’ve seen in this pandemic. We need people who know what they are talking about and what the implications would be to be sitting at the table with the same level of importance and influence as any other.”

It’s hard to imagine how decades of warnings about climate change might have been received in government if there were more scientists sitting at the table. The last natural scientist to serve in the Senate was Harrison Schmitt, a New Mexico geologist and astronaut, who left office at the beginning of 1983, when the biggest issue bridging science and politics was the use of nuclear weapons. That was five and a half years before climatologist James Hansen delivered his famous testimony to a Senate committee on a hot June day, explaining that anthropogenic greenhouse gases were already heating the planet up.

Getting involved in politics has long been a fraught endeavor for scientists, but that may be changing. In 2018, several scientists ran and won seats in the U.S. House of Representatives. But Senate representation has remained elusive.

Ben-David’s central campaign promise is to support policies that will help Wyoming diversify its economy. The state relies almost exclusively on revenue from the energy sector to fund everything from its schools to healthcare. Now, the oil price decline tied to the pandemic and a feud between Saudi Arabia and Russia has put Wyoming in a hole: The legislature is bracing for a budget shortfall “equivalent to eliminating every single person employed in state government,” the Casper Star Tribune reported, “or roughly all of the spending for the state’s education system.”

Ben-David said that most Wyomingites believe in climate change. But even for those that don’t, it should be clear the state’s current economy keeps it vulnerable to forces outside of its control. “Nobody banned fracking,” she said. “None of us banned oil production. None of us closed the coal-fired power plants. But they’re closing.”

So to her, Wyoming has two options: “We can fall off the cliff, which is what we’re experiencing right now, or we can say okay, let’s invest in something else.”

She wants to attract new industries to the state like biotechnology and those that will be needed in the energy transition, like manufacturing of electric car parts and advanced nuclear reactors. In the meantime, she would stimulate the economy with New Deal-style programs to reclaim old mines and plug abandoned oil wells, expand broadband access and build out light rail systems, and her favorite potential job creator: constructing wildlife overpasses over Wyoming’s highways to help animals migrate safely.

When asked how she communicates that message to fossil fuel workers, she said that what she was offering was more compassionate than the companies that employ them. She cited Blackjewel, a coal company that filed for bankruptcy last summer, leaving 600 Wyoming miners suddenly without work, health insurance, or backpay.

Ben-David also believes her experience in wildlife management makes her uniquely qualified to get things done in Congress. Wildlife management involves balancing the interests of many different stakeholders — environmental groups, energy developers, hunters, private landowners. In these situations, she said, her job is to use science to inform collaborative decision-making. “When we identify the problem, and we have the will, we find solutions,” she said.

When not moonlighting as a Senate candidate, Ben-David is a professor at the University of Wyoming, where she studies how humans affect ecosystems, and especially the animals that live in them. One of her main research subjects is the cliché symbol of climate change itself — the plight of polar bears in the Arctic.

Ben-David traces her interest in politics back to an expedition in 2009 where she and a team of scientists were rescuing polar bears that, stranded on ice floes, had drifted too far north, away from sources of food. On the way home, in late October, the ship should have been breaking through newly formed ice, but she distinctly remembers sitting down for an interview with a National Geographic filmmaker who was on board and noticing a strange reality. “We were cruising in open water at full speed and it was so warm, so late in the fall, that I didn’t even wear my hat or gloves.”

“I realized that our models are optimistic,” she said. “Things are progressing much faster than we expected.”

In the years since, she joined the bipartisan advocacy group Citizen Climate Lobby, where she learned how to lobby effectively. She said she felt optimistic in 2015 after the finalization of the Paris Agreement, which showed her that the world really can figure out how to work together to solve this crisis. She’s also been inspired by Elizabeth Warren, who, though not a scientist, also made the leap from academia to politics. With Enzi retiring, Ben-David saw an opportunity.

So did Cynthia Lummis, the Republican candidate and an established Wyoming figure who served in the U.S. House of Representatives from 2009 to 2017. Lummis’ cure to Wyoming’s economic woes is to lift up its fossil fuel industries, including by making them cleaner through carbon capture and storage technology.

Wyoming has not elected a Democrat to a federal office since 1970, and FiveThirtyEight’s election modeling predicts that trend will continue.  But Ben-David disagrees with the idea that she’s a long shot. As a scientist, she did the math before she decided to run: First, roughly half of eligible voters in Wyoming are registered to vote. Maybe her message would inspire some of those nonvoters to get to the polls. Second, registered Republicans in the state tend to cross party lines in general elections. In 2018, for example, there were only about 45,000 registered Democrats in the state, but Gary Trauner, a Democrat who ran for Senate against incumbent John Barasso, garnered a little more than 60,000 votes, or about 30 percent of the electorate.

Wyoming also has the smallest population of any state, with less than 580,000 people. In order to win, Ben-David said she doesn’t need to convince millions of people to change their minds, like Jaime Harrison does to beat Lindsey Graham in South Carolina, or Amy McGrath does in order to dethrone Mitch McConnell in Kentucky. “Really, to win this election, you need to convince only 56,000 people to switch. I thought that was doable,” she said. “But also, yeah. It’s an uphill battle.”