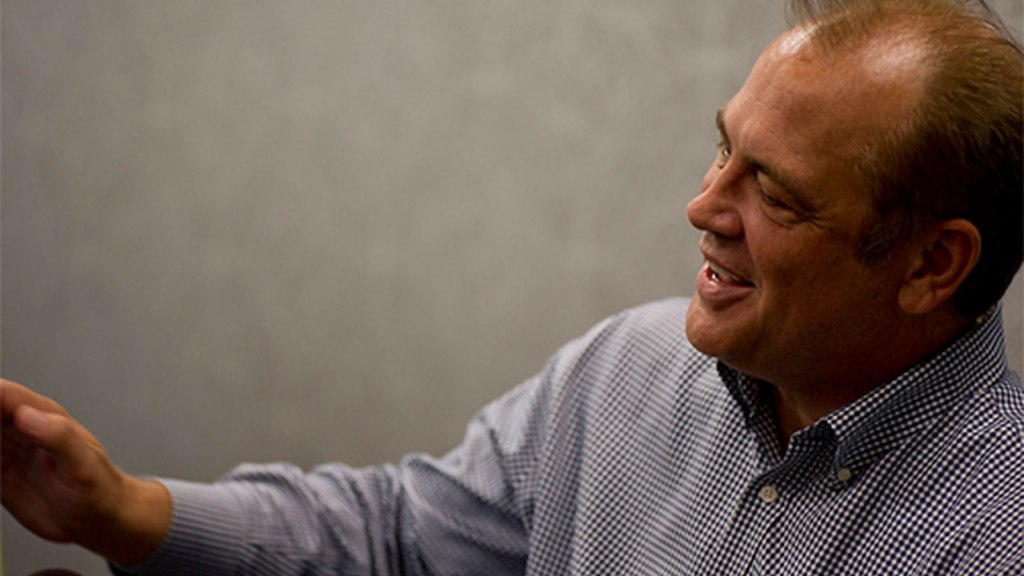 South Dakota has 4.32 cows per capita, the most of any state. And you know what cows produce: methane. So you might not expect a Senate candidate in the state to propose cracking down on greenhouse gas emissions. But that’s exactly what Rick Weiland is doing.

Weiland stands in stark contrast to the type of Democrat who usually runs for Senate in rural, red states, like Kentucky’s Alison Lundergan Grimes or West Virginia’s Natalie Tennant, singing the praises of fossil fuels. Green-minded voters hold their noses and vote for them, and then they usually lose anyway.

South Dakota would not seem likely to break the mold and produce an unapologetically liberal and pro-environment candidate. But it has with Weiland, a businessman and former FEMA official who won the Democratic nomination for Senate this year. Weiland has taken the surprising approach of opposing the Keystone XL pipeline that would run through South Dakota and forthrightly standing up for environmental regulation.

“My opponent wants to abolish the EPA,” Weiland tells Grist, referring to former South Dakota Gov. Mike Rounds, the Republican Senate nominee and the frontrunner in the race. “We all remember what it was like before the EPA: We were lighting rivers on fire. You couldn’t fish in the Potomac, let alone go swimming.” (The Potomac is nominally swimmable now, although you would be advised to take a number of precautions.)

According to South Dakota Public Broadcasting (SDPB), “Rounds has spoken publically about eliminating the EPA, often to the cheers of those gathered in the crowd.” This despite the fact that, as SDPB notes, EPA does quite a lot for South Dakota. For example, in 2013 alone, EPA treated 118 million gallons of acid mine drainage from the Gilt Edge Mine, a South Dakota Superfund site.

This election season, green groups have been framing key races in advertisements not around climate change per se but around populist messages: Anti-environment Republicans are bankrolled by “Big Oil” and they serve “out-of-state billionaires” like the Koch brothers rather than regular Americans.

Even though South Dakota is not one of environmentalists’ targeted races, Weiland uses similar language. He describes himself as “an economic populist.” When discussing Keystone XL, he focuses heavily on the fact that it won’t actually create many lasting jobs. The U.S. State Department estimates that the pipeline would only support 35 permanent positions. It would create a few thousand more temporary construction jobs, but only a small portion of them would be in South Dakota. Also, using an approach that might make diehard free-traders wince, Weiland points out that it’s a Canadian company (TransCanada) looking to build the pipeline, and the purpose is to move oil out of North America.

“There are no jobs in [the pipeline] except for two-week [construction] jobs,” says Weiland. “That’s not a jobs program for the country, it’s Big Oil trying to sell you a bag of goods. You can sit down with voters and say, ‘There won’t be jobs, the oil is going overseas, and they’re asking us to take on the risks, to run that pipeline over our aquifer.’ The people are with me on that.”

Weiland says he has never encountered a voter he could not convince of his stance on Keystone, but it looks like he hasn’t talked to enough voters yet. A recent poll by North Plains News showed South Dakotans favoring Keystone XL 64 percent to 24 percent. Weiland attributes public support for the pipeline to the corporate interests that are peddling vastly inflated estimates of job creation and nonsensical rhetoric about “North American energy independence.” “The big money has all the advantages,” says Weiland. “They buy experts to cook up studies and take over the airways. It’s a Big Oil con job.”

On climate change more generally, Weiland unambiguously accepts the scientific consensus, saying, “The ice caps don’t lie. They’re melting. It’s like a canary in a coal mine.” He says he would support expanded research and incentives for renewables and conservation, although he is vague on the details. Likewise, Weiland does not have a specific carbon-pricing plan but says he is open to backing either cap-and-trade or a carbon tax if it is crafted so as not to adversely affect South Dakota farmers. Perhaps his most questionable environmental stance is touting ethanol, specifically E85. That’s great for a state with lots of corn farming, but not necessarily good for the climate.

In Weiland’s view, the outsized influence of money in politics is one of the main drivers of bad policy. That’s why he supports a constitutional amendment to overturn the Supreme Court’s decision in Citizens United. When it comes to passing a carbon price, Weiland says, “There are a few things we’re going to have to do first, like getting money out of our politics because big oil companies want us to keep consuming fossil fuels. The more we consume, the more money they make.” Weiland is equally progressive on other issues — for example, he supports the creation of a public option in health insurance, essentially optional Medicare for all.

Rick Weiland is not going to win. Earlier this month, he was briefly thought to have a shot when he pulled to within four points of Rounds, but more recent polls have shown him down by an average of 12 points. And he certainly wouldn’t have even made it close if this weren’t a three-way race with former Republican Sen. Larry Pressler running as an independent.

So Weiland hasn’t proven that one can run on an assertively progressive, pro-environment platform in South Dakota and win. At the same time, he is performing about as well as any Democrat could be expected to. You’re never going to out-Republican the Republicans, so there’s no reason to think he would have done better by backing Keystone, inveighing against the EPA, or denying climate science. So he’s at least shown there’s no political harm in taking the substantively right position and going down with dignity.