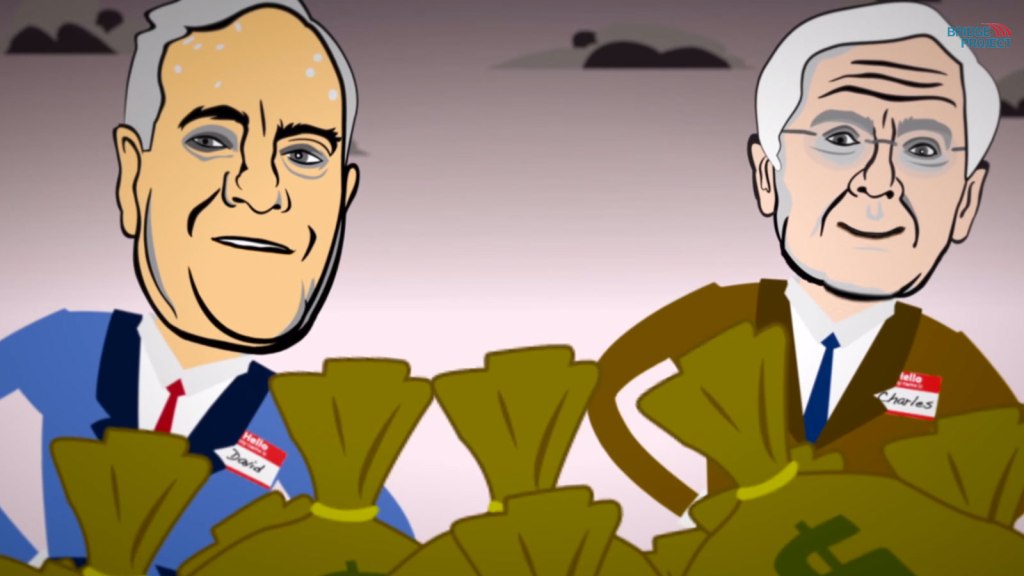 Pro-environment political action committees are airing ads attacking the most anti-environment candidates, all Republicans, in close Senate and gubernatorial races. But the ads are often focused more on dirty money than dirty energy.

NextGen Climate Action Committee and the League of Conservation Voters (LCV) Victory Fund choose their targets based on who has the worst record on climate change, energy, and conservation, but many of their ads make a more general critique that a candidate is beholden to wealthy, polluting donors rather than the public interest.

NextGen has run seven such ads against Florida Gov. Rick Scott (R), and the group thinks it is working at driving down his job approval ratings in targeted media markets. It and other groups are using the same approach elsewhere. In Michigan, NextGen has a television ad noting that Terri Lynn Land’s Republican senatorial candidacy is being supported by $6.5 million in spending from the Koch brothers. As the ad notes, last year Koch Carbon, one of the brothers’ companies, dumped three-story-high piles of a dirty residue from tar-sands oil called “petroleum coke” along the Detroit River. It’s hard to imagine that they have the Michigan public’s best interests at heart.

Even in states where the Kochs haven’t dumped their toxic products, green groups are tying opponents to them. In New Hampshire, the LCV is running an ad hitting Republican Senate candidate Scott Brown for voting for tax breaks for oil companies when he was representing Massachusetts in the Senate, and getting support from the Kochs in this campaign. “Out-of-state oil billionaires trying to elect an out-of-state politician,” says the narrator. “That’s good for Big Oil, but bad for New Hampshire.”

LCV says talking about the Kochs helps put a targeted politician’s views in context. “Bringing the Koch brothers into the discussion crystallizes for voters whose side a candidate is on,” says LCV spokesperson Jeff Gohringer. “It helps explain why someone would ignore the facts on climate science or peddle an extreme environmental agenda. They’re standing up for the polluters that are propping up their campaign.”

Some ads are very specifically about climate change. Even in those cases, the topic is often used partly to make a characterological critique. For example, NextGen just released an ad mocking Gov. Scott for ducking questions about whether he accepts the scientific consensus on climate change by saying he is “not a scientist.” The commercial points out that 97 percent of climate scientists say climate change is being caused by human activity, showing a gang of actors dressed as scientists in white lab coats. Off to the side are three Scott supporters, who are depicted as cavemen reincarnated as frat boys. “We like it hot,” says one in a California surfer-bro accent. The point is not just that Scott is wrong on the specific issue of climate change, but that he is an idiot and you would be too if you were to vote for him.

Some ads focus on both climate change and money in politics. LCV has an ad that attributes Land’s climate denialism to her support from the Kochs. “We see it every day in Michigan. Climate change, having real effects,” says the narrator, as the screen shows footage from recent flooding and algae blooms. “So why is Terri Lynn Land still ignoring the science?” And then the pivot: “She’s got her reasons. Over six million of them. From the Koch brothers front groups backing her campaign.”

For the left, the Koch brothers make a potent symbol of the GOP’s corporatism and ideological extremism, so even groups that don’t focus on the environment in particular are cutting ads featuring the Kochs and their ties to the fossil fuel industry. American Bridge 21st Century PAC, a progressive campaign messaging group, has a website and animated series of web shorts called Kochville. In the introductory episode, Charles and David Koch welcome you to Kochville, “our profit-driven utopia.” They brag about having gotten rid of Social Security, the minimum wage, and “those pesky environmental protections.” To hammer home the point, Charles then coughs in front of a smog-spewing power plant and a bald eagle crashes, dead, onto the screen. Each of the next five episodes shows how a craven, untrustworthy Republican Senate candidate is in the Kochs’ pocket.

The final installment, just posted on Tuesday, focuses on Senate Majority Leader Mitch McConnell (R), who is in a close reelection race in Kentucky. Even by the standards of Senate Republicans, McConnell is enthusiastically pro-coal. The cartoon McConnell, who ably mimics the real senator’s Droopy voice, waits on the Kochs hand and foot. He promises to make sure the rest of the right-wing Senate candidates ridiculed in American Bridge’s other episodes, like North Carolina’s Thom Tillis, follow the Kochs’ instructions to do the bidding of Big Oil and repeal financial regulations.

So progressive and green groups have come up with some artful ads that might resonate with voters, and they’ve got some money behind them — $50 million from Tom Steyer for NextGen and $25 million from LCV. That’s the good news. The bad news? Fossil fuel interests and other conservative groups are still outspending them dramatically. The Koch network is pouring an estimated $290 million into the midterm elections. Through August, they had already bought 44,000 television ad spots, a number The Washington Post called “absolutely breathtaking.” Karl Rove’s Crossroads GPS is spending $75 million on ads to help Republican candidates. The U.S. Chamber of Commerce — which despite its anodyne name is a partisan Republican advocacy group — is spending more than $50 million to promote its favored candidates this year. It is, for example, buying pro-coal ads for McConnell in Kentucky.

These problems are compounded by the fact that even Democrats in fossil fuel–producing states like West Virginia, Kentucky, and Louisiana are running ads promising to defend their local dirty energy industries. So overall, voters are seeing a lot more anti-environment messages than pro-environment ones. According to a statistical analysis by The New York Times, there have been six times as many ads taking a pro-coal position as there have been about climate change.

Some Republicans are disingenuously greenwashing their records. In Colorado, voters generally support a clean environment and renewable energy. So Rep. Cory Gardner (R), the far-right challenger to Sen. Mark Udall (D), has cut an ad touting his support for wind energy. Never mind that Gardner has a deplorable voting record on environmental issues. He has a 9 percent lifetime voting score from LCV, which named him to its Dirty Dozen list of candidates “who consistently side against the environment.” Gardner voted earlier this year against an amendment stating that climate change is happening. He has been evasive when asked about the issue during the campaign, at one point saying pollution does contribute to climate change, then backtracking. Even his support for the federal wind energy tax credit is limited and weaker than Udall’s — Gardner wants it phased out and has voted against budget bills that would have renewed it.

The Colorado Senate race presents an unusually stark choice on environmental issues, since Udall is a strong advocate of action to address climate change. In conservative states, the most anti-environment Republicans face off against the most anti-environment Democrats. In New England, the most pro-environment Republicans face liberal Democrats. Colorado is in the unique position of being a swing state that has fossil fuel reserves, a strong renewable sector, and voters who care a lot about the quality of their environment. For all these reasons, Gardner wants to blur the contrast between himself and Udall, and LCV has made it a top priority not to let that happen. Last week, LCV announced a $1.6 million field operation to canvass Colorado voters. The group has been running ads against Gardner for months. Back in April, it spent a million dollars airing an ad noting that Gardner has received hundreds of thousands in contributions from oil and gas companies and has voted to protect billions in tax breaks for Big Oil. But anonymous rich Republicans and fossil fuel interests are spending more on helping Gardner. Rove’s Crossroads GPS is spending $9.5 million in Colorado alone.

So this election cycle may turn out to be the first one where climate and clean energy are shown to be powerful issues for Democrats — but only if the message isn’t drowned out by fossil fuel money.