Mike Huckabee can't make up his mind about ethanol - Grist 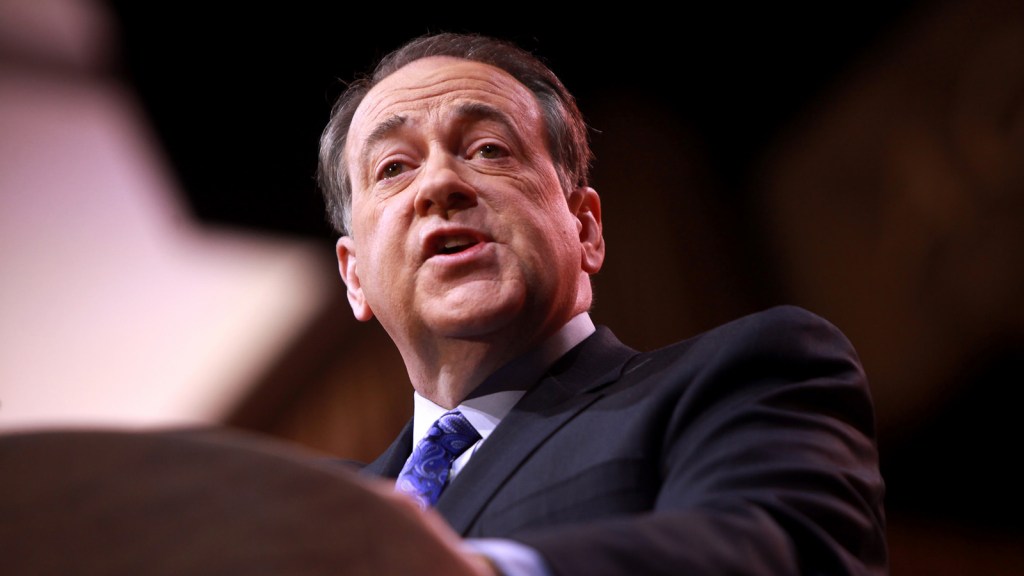 Mike Huckabee can’t make up his mind about ethanol

On the campaign trail, GOP presidential hopeful Mike Huckabee has been a vocal supporter of the ethanol industry. The former Arkansas governor has repeatedly spoken out in defense of the Renewable Fuel Standard — the federal policy that requires energy companies to blend billions of gallons of biofuels into the nation’s gasoline and diesel supply. That makes political sense in Iowa, where corn is big business. Ethanol made from corn constitutes the vast majority of domestic biofuel consumption. And roughly 40 percent of corn grown in the United States is used to produce ethanol.

So it was a bit surprising when Huckabee used his latest book to take direct aim at biofuels such as ethanol. In the middle of a chapter questioning the science of climate change, he suggested that biofuels have been propped up by unscientific “environmentalist policies” that drive up food prices and make global warming worse. Here’s the relevant passage from God, Guns, Grits, and Gravy, which was published in January:

Climate change isn’t the only field in which the environmental movement has claimed to represent unassailable scientific truth, only to be brought up short by new data.

For years, we were told that biofuels were the future. Skeptics who questioned whether it took more energy to create a gallon of fuel from corn than was generated by burning it were dismissed. But as we devoted more and more of our food crops to energy production, we discovered yet again that for every action, there is an equal and opposite reaction. (Science!) In this case, so-called environmentalist policies hurt the poor when the supply of corn and other grains fell, causing skyrocketing food prices and shortages that led to riots in undeveloped nations. At this writing, the European Union has just agreed to limit biofuels, for those reasons and also because they were found to make some engines run less efficiently, to cause more pollution than expected, and to harm the environment and contribute to global warming, due to the need for clear-cutting more farmland.

Huckabee’s professed skepticism about biofuels actually echoes the views shared by a number of conservative activists and environmentalists. But it diverges greatly from much of what he has said and written elsewhere. For example, here’s what Huckabee wrote in his 2007 book, From Hope to Higher Ground:

One energy source that makes perfect sense for America to aggressively explore and dramatically increase is the production and use of biofuels. The most common biofuels are ethanol and biodiesel, both of which have the potential of decreasing our dependence on oil, but could also have a dramatic and positive impact on America’s agricultural production. It could give our farmers the ability to feed and fuel us. While the cost of converting a biofuel source to usable fuel has been historically expensive and therefore not as attractive as gasoline, creating incentives with potential hefty financial rewards could be valuable in the production of ethanol and biodiesel. New technologies using forms of biomass are increasingly viable, and the production of these would be controlled within our own borders. An added advantage of biofuels is that unlike gasoline and conventional diesel, they contain oxygen, which allows petroleum products to burn more completely, reducing air pollution and cutting back on the buildup of greenhouse gases.

Huckabee reportedly backed the Renewable Fuel Standard during the 2008 campaign (although, in at least one debate, he appeared to reject the idea of biofuel mandates). At the time, his campaign website said that “we need more ethanol.”

This past March — less than two months after slamming biofuels in his book — Huckabee attended the Iowa Ag Summit in Des Moines, where he spent 20 minutes answering questions posed by ethanol kingpin and GOP megadonor Bruce Rastetter. “You’ve been an unabashed supporter of the RFS,” Rastetter said.

“Yeah,” responded Huckabee, adding that the biofuel mandate was part of a “bigger picture of energy independence and energy security” that could help the United States “turn the tables” on Russia and Iran. He didn’t say anything about “skyrocketing food prices.” You can watch the exchange here:

Huckabee addressed the issue again at a May 7 campaign event in Sioux City, where he argued that ending government support for ethanol puts farmers and companies “out of business, and it destroys what is beginning to become a more reasonable, responsible, and economically viable industry.”

I asked Huckabee’s campaign how they reconcile the candidate’s campaign-trail biofuels boosterism with the sharp criticism leveled in his book. They didn’t respond.