Obama: Climate change is a huge threat to future generations 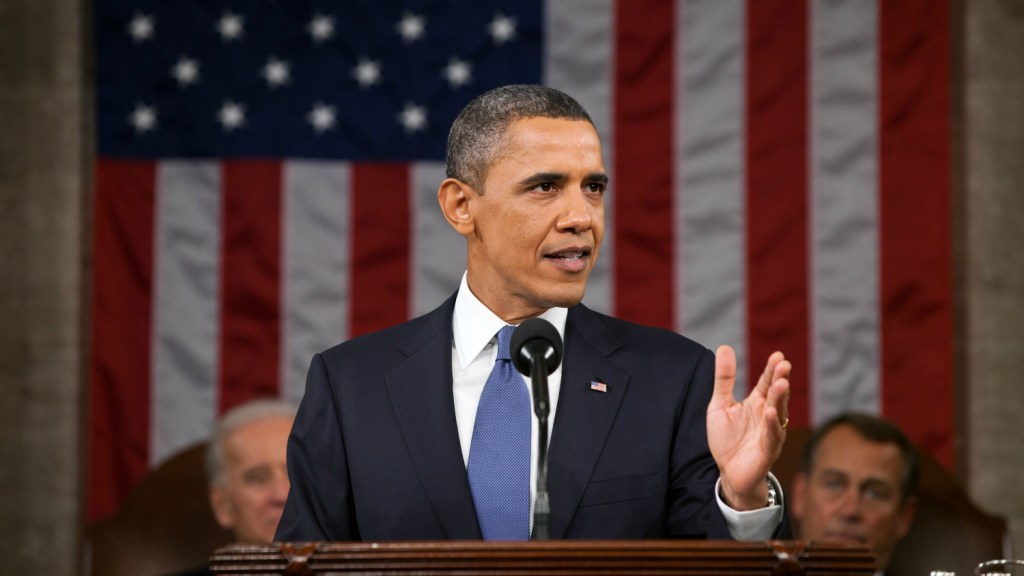 Obama: Climate change is a huge threat to future generations

Almost every year, President Obama drops a few lines into the State of the Union about climate change, but this year he gave his longest and most forceful statements on the issue. Watching his masterful rebuttal of Republicans’ weak excuses for avoiding the challenge was immensely satisfying. At the same time, however, Obama was frustratingly circumspect. He issued no new policy proposals, announced no further plans for executive action, and made no specific demands on Congress.

“[N]o challenge — no challenge — poses a greater threat to future generations than climate change,” said Obama. That repetition was in the prepared remarks. Obama went on to say he wouldn’t allow Republicans to undo the progress he has made, as they will attempt to. Translating into wonky specifics, Obama is saying he will veto GOP bills that would block the EPA from regulating power plant CO2 emissions. But the only forward-looking climate priority he alluded to is getting an agreement at the next round of U.N. climate negotiations in Paris this December. Whereas Obama called on Congress to pass bills on many of his other priorities — such as infrastructure spending and equal pay for equal work — he did not ask Congress to do anything on climate except get out of the way. That’s because he realizes that Republicans won’t pass a bill to address a problem they don’t even accept.

Obama did not say much about energy policy, but he implicitly continued his “all of the above” approach by boasting that the U.S. is now the world’s leading producer of oil and gas as well as wind power, and we’re rapidly adding solar capacity. It seems Obama has no intention of making overdue policy changes such as ending the leasing of federal lands and offshore areas for fossil fuel extraction.

[O]ver the past six years, we’ve done more than ever before to combat climate change, from the way we produce energy, to the way we use it. … [W]e’ve set aside more public lands and waters than any administration in history.  … I will not let this Congress endanger the health of our children by turning back the clock on our efforts. I am determined to make sure American leadership drives international action. In Beijing, we made a historic announcement — the United States will double the pace at which we cut carbon pollution, and China committed, for the first time, to limiting their emissions. And because the world’s two largest economies came together, other nations are now stepping up, and offering hope that, this year, the world will finally reach an agreement to protect the one planet we’ve got.

Environmentalists praised the urgency of Obama’s rhetoric. But some were disappointed by the lack of forward momentum in his policy agenda. “While the President is rightfully calling on Americans to ‘forcefully’ address global warming, by using the Environmental Protection Agency’s authority to reduce greenhouse gas emissions, his claim of climate change leadership is weakened by his administration’s continued pursuit of fracking and fossil fuel exploration and export,” said Friends of the Earth-US President Erich Pica.

At various points during his speech, Obama got laughs when he mocked Republican intransigence. After calling for equal pay legislation for women, Obama said, “Really. It’s 2015. It’s time.” He went after the Republicans’ current climate dodge in a similarly waggish tone:

I’ve heard some folks try to dodge the evidence by saying they’re not scientists; that we don’t have enough information to act. Well, I’m not a scientist, either. But you know what — I know a lot of really good scientists at NASA, and NOAA, and at our major universities. The best scientists in the world are all telling us that our activities are changing the climate, and if we do not act forcefully, we’ll continue to see rising oceans, longer, hotter heat waves, dangerous droughts and floods, and massive disruptions that can trigger greater migration, conflict, and hunger around the globe. The Pentagon says that climate change poses immediate risks to our national security. We should act like it.

Republicans disagree that we should confront the realities of climate science. For their official response, the GOP chose newly elected Sen. Joni Ernst of Iowa. Ernst is a right-wing extremist, best known nationally for bragging about having castrated hogs. She wants to shut down the EPA, believes in an anti–smart growth conspiracy theory about “Agenda 21,” and denies climate science with the very “I’m not a scientist” line that Obama mocked in his speech. In her remarks, Ernst exposed the absence of any real Republican agenda on climate or energy by having nothing to say about either except for the obligatory overhyping of Keystone. Here’s her compendium of talking points on the subject:

One [idea] you’ve probably heard about is the Keystone jobs bill. President Obama has been delaying this bipartisan infrastructure project for years, even though many members of his party, unions, and a strong majority of Americans support it. The President’s own State Department has said Keystone’s construction could support thousands of jobs and pump billions into our economy, and do it with minimal environmental impact.

We worked with Democrats to pass this bill through the House. We’re doing the same now in the Senate.

President Obama will soon have a decision to make: will he sign the bill, or block good American jobs?

In fact, the State Department actually found that almost all the Keystone jobs would be temporary construction work, and only 35 would be permanent. And as David Roberts just observed, while polls show most Americans support Keystone, they also support completing the governmental review of it before making a final decision. In reality, as David explains, they really just don’t know anything about it and say yes to whatever sounds good.

Obama, as he has before, emphasized in his speech that Keystone is not nearly as important as Republicans make it out to be. When discussing the need for infrastructure investment, he said, “Let’s set our sights higher than a single oil pipeline.”

Although the president ended the State of the Union on an inspiring call for bipartisan cooperation, the Republican response rejected Obama’s olive branch. Ernst decried the “same stale mindset … that gave us political talking points, not serious solutions.” But on the environment and energy, that’s all she and her party have to offer.