Rand Paul is no moderate on climate change 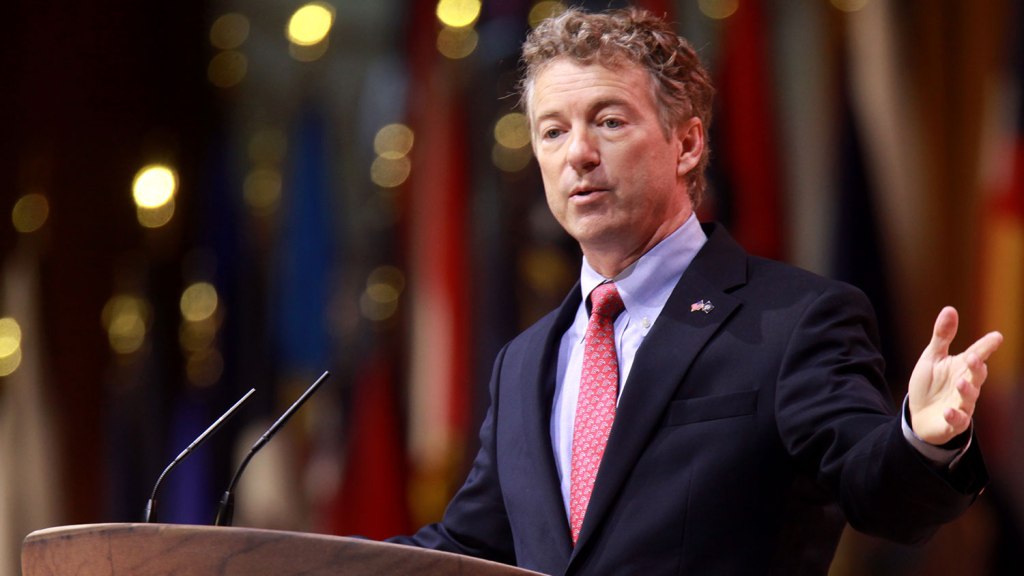 Rand Paul is no moderate on climate change

This is an updated version of a post originally published on 19 Feb 2015.

Journalists love a counterintuitive story, like when a Democrat criticizes unions or a Republican endorses gay marriage. Sen. Rand Paul (R-Ky.), with his idiosyncratic libertarianism, provides them with a lot of good stories, like his opposition to mass incarceration. In that vein, a couple of recent media reports assert, on the thinnest reeds of evidence, that Paul has accepted climate science or endorsed regulating carbon pollution. He hasn’t. Sorry, reporters: There is no counterintuitive story about Paul and climate change.

Paul, who is announcing a presidential run on Tuesday, is an anti-government extremist and a climate change denier. Just last April, he said he is “not sure anybody exactly knows why” the climate is changing. He went on to call the science “not conclusive” and complain about “alarmist stuff.” If you’re wondering what he means by “alarmist stuff,” in 2011, while arguing for a bill that would prevent the EPA from regulating carbon emissions, Paul said, “If you listen to the hysterics, … you would think that the Statue of Liberty will shortly be under water and the polar bears are all drowning, and that we’re dying from pollution. It’s absolutely and utterly untrue.” Paul went on to assert that children are being misled into believing that “pollution” has gotten “a lot worse,” when “It’s actually much better now.” Paul, of course, was conflating conventional air pollution — like sulfur dioxide, which has declined in the U.S. — and climate pollution, which is cumulative and global, and therefore gets worse every year, even if America’s annual emissions drop.

Indeed, Paul is prone to making ignorant, conspiracist statements about science in general. In October, he suggested to Breitbart News that Ebola may be more easily spread than scientists say and that the White House had been misleading the country on the issue. And in February, Paul told CNBC, “I’ve heard of many tragic cases of walking, talking normal children who wound up with profound mental disorders after vaccines.” This despite the fact that the supposed connection between autism and vaccination has been thoroughly debunked.

Like almost every other Senate Republican, Paul has voted to strip the EPA of its legal authority to regulate greenhouse gas emissions, to force approval of the Keystone XL oil pipeline, and to prevent Congress from placing any tax or fee on carbon pollution. Paul’s lifetime voting score from the League of Conservation Voters is 9 percent.

Knowing this, I was surprised to read in National Journal that Rand Paul is running to his party’s left on climate change. Clare Foran, an energy reporter at NJ, writes:

[I]n recent months, Paul has started to build a record suggesting that he supports action to cut air pollution and believes that man-made greenhouse-gas emissions are contributing to climate change.

That stance sets Paul apart from many Republican 2016 hopefuls who have publicly cast doubt on humankind’s impact on climate change and duck the question of whether the U.S. should curb emissions.

Unfortunately, Foran’s central assertion is untrue. Paul has not “started to build a record suggesting that he supports action to cut air pollution.” And even if he had, that’s not the same thing as supporting action to cut climate pollution. (There’s that conflating again.) He has not supported a single bill or taken a single vote to limit emissions of conventional air pollutants or carbon dioxide.

Foran hypes the one and only vote in which Paul acknowledged that humans are having some effect on the climate. She writes: “The senator voted ‘yes’ on an amendment [in January] affirming that climate change is real and that human activity contributes to it, while Marco Rubio and Ted Cruz voted ‘no.’” In all, 15 Republican senators voted for that amendment. But merely admitting that human activity plays “at least some” role in climate change falls far short of the overwhelming scientific consensus, which is that humans are the main cause of global warming.

During that same Senate debate, Sen. Brian Schatz (D-Hawaii) sponsored an amendment saying human activity is “significantly” responsible for climate change. That was a real endorsement of climate science, and only five Republican senators voted for it. Rand Paul was not one of them. (Schatz should have gone even further and said human activity is primarily responsible for warming, which the vast majority of climate scientists agree on.)

More importantly, a politician — especially an extreme anti-regulatory zealot such as Paul — can accept climate science but oppose doing anything about it. Foran’s evidence that Paul supports climate action is even less convincing than her claim that he accepts climate science:

Paul also sees an upside to environmental regulation in some cases. “I’m not against regulation. I think the environment has been cleaned up dramatically through regulations on emissions as well as clean water over the last 40 or 50 years, but I don’t want to shut down all forms of energy such that thousands and thousands of people lose their jobs,” Paul said during a November interview on HBO with Bill Maher. …

To be sure, Paul has not set out any plan of his own for how to cut back emissions. But the senator has made clear that he thinks action should be taken to do so.

“I’m against pollution and think we should minimize pollution, whether or not the models are correct,” Paul said during an interview last year with former Obama adviser David Axelrod. [emphasis in original]

In that interview with Axelrod, Paul then falsely asserted that “most of the models have been changed within the last five years, they all predicted the poor Statue of Liberty was going to be drowned within 100 years.” The Statue of Liberty is 305 feet tall. No credible climate scientist has ever claimed that the sea will rise that high in 100 years, nor does the fact that it won’t disprove any of what climate scientists actually do say about the importance of limiting sea-level rise this century to more like two feet than six feet.

In light of Paul’s tendency to conflate general air pollution with climate pollution, and his lies about climate science in that Axelrod interview, it is not clear that Paul was endorsing minimizing climate pollution specifically. Reporters need to understand that distinction.

Even if Paul were talking about climate pollution, saying “we should minimize” it is not the same thing as saying the government should mandate emissions limits. Politicians, especially Republicans, often make observations about what we as a society should do — parents should spend more time with their kids, for example — that they don’t want the government to require. Indeed, Paul dodged Axelrod’s follow-up question about how he would minimize pollution with a disquisition on overregulation: “The pendulum has gone way too far, with very little consideration for jobs and too much consideration for maybe theories that aren’t always true,” Paul said.

The false contention that Paul is some kind of climate moderate is not limited to Foran’s piece. Conservative website Newsmax reports, incorrectly, “On a variety of issues from criminal justice reform to climate change, Paul has partnered with Senate Democrats on legislation in an effort to cast himself as a different kind of Republican.” Unless you count being one of 15 Republicans to vote for a purely symbolic, milquetoast amendment as “partnering” on legislation, that simply isn’t true. Nor is it necessarily true, as The New Republic’s Rebecca Leber claims, that Paul’s vote on that amendment is an indication that “Republicans will actually debate climate change in the 2016 primary.”

The sliver of truth to Foran’s story is that Paul wishes to appeal to nontraditional Republican constituencies such as young voters and minorities. Therefore, he gives interviews to liberals such as Maher and Axelrod, which means having to answer questions about climate change. And since he wants to appeal to voters who accept climate reality, he tries to minimize his differences with them.

But reporters who cover these issues shouldn’t hype up his vague answers as signs of a meaningful policy shift. Paul has not broken with his party on climate change.