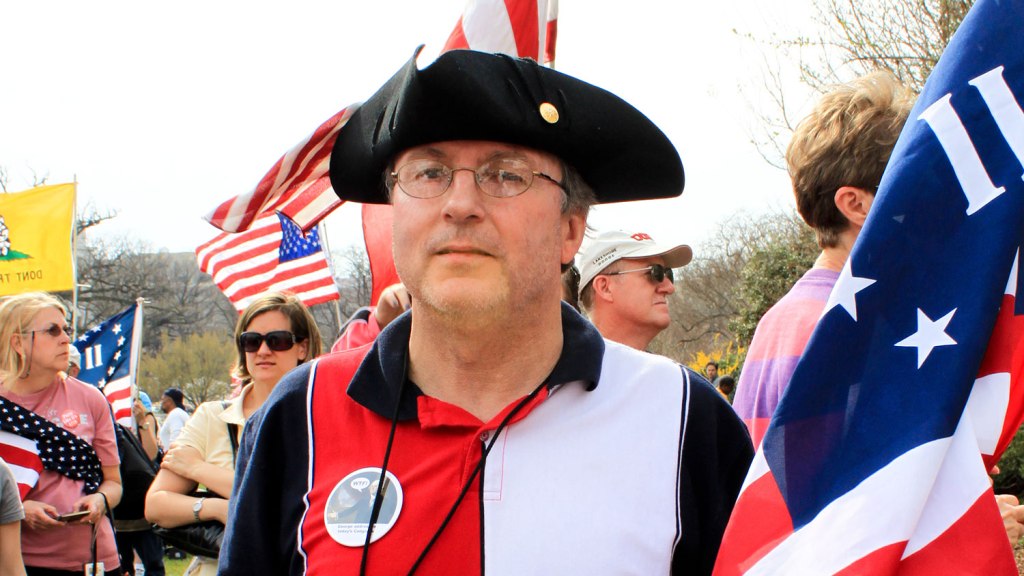 Are they real or fake? The Q Speaks
Politics

Making a living as an actor in Florida must be hard. The state — best known for sinkholes, alligators, and idiotic criminals — is not exactly a capital of theater, film, or television. So you can’t really blame the actors who took $75 from a local Tea Party chapter and sugar conglomerate in West Palm Beach to pretend to be protesters.

The people to blame are the corporate chieftains and local conservative activists who tried to compensate for the unpopularity of their cause by astroturfing their rally.

Here’s what happened: On Thursday, during a meeting of the South Florida Water Management District, “Tea Partiers” gathered outside to protest a state plan to purchase a big swath of the Everglades and protect it. But as the Palm Beach Post reports, they were mostly actors hired by the Tea Party of Miami and the company U.S. Sugar. The Tea Party chapter put the casting call out on Facebook, captured by a reporter for Creative Loafing Tampa. They offered $75 cash to show up for two hours and hold banners and signs, which would be provided. 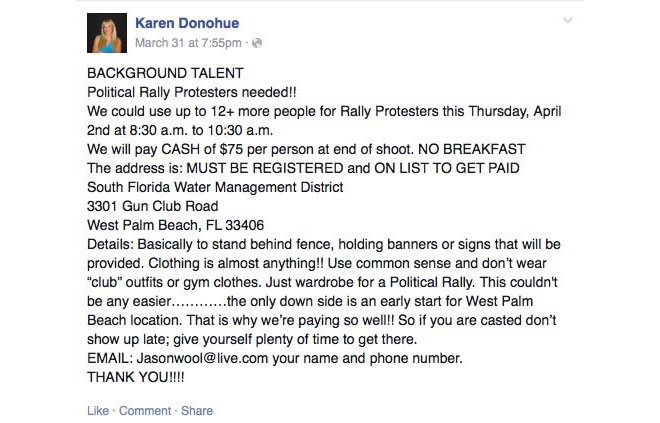 It’s easy to see why they had such trouble filling out a crowd without paying for it. Everglades restoration is enormously popular in Florida. While Florida Republicans have an extreme right-wing streak — epitomized by the climate change denial of Gov. Rick Scott, former Gov. Jeb Bush, and Sen. Marco Rubio — traditional conservation has tended to enjoy bipartisan support in the state. As Michael Grunwald reports in The Swamp, his wonderful history of the Everglades, even at the height of Florida’s 2000 recount fiasco, Jeb Bush and other Florida Republicans joined hands with the Clinton-Gore administration to celebrate the signing of an Everglades restoration bill.

Restoring the health of the vital wetlands is critical to preserving animal habitats, building resiliency against storms in an era of rising sea levels, and sequestering carbon. Historically, sugar companies have decimated much of the Everglades by filling the wetlands and growing sugar cane. Other parts of it have been drained to throw up strip malls and subdivisions.

In 2008, then-Gov. Charlie Crist — at the time he was a moderate, pro-environment Republican, but he has since switched parties — made a deal to buy 183,000 acres from U.S. Sugar. In 2011, his more conservative, Tea Party–backed, anti-environment successor, Scott, took office. Scott refused to exercise options to complete portions of the purchase, in part because U.S. Sugar decided that it could now make more money from ruining the land than from selling it. With the economy rebounding, the company decided to get into the real estate development game. It has cozied up to the Scott administration, and last summer announced plans to develop a 67-square-mile section of the Everglades.

For the past two years, as its executives were taking Florida politicians on secret hunting trips to the King Ranch in Texas, U.S. Sugar was planning for a massive change in its business plan.

The company, which has been growing and processing sugar cane in South Florida since the 1930s, has mapped out a way to turn itself into one of Florida’s biggest developers.

On 67 square miles of sugar land southwest of Lake Okeechobee in Hendry County, U.S. Sugar and Hilliard Brothers of Florida, another sugar company with adjoining property, have joined forces on a project that would plop down 18,000 homes and 25 million square feet of stores, offices, warehouses and other commercial buildings amid the rural landscape.

But the land that U.S. Sugar wants to designate for development is the same land that Florida officials have an option to buy for Everglades restoration. If the sugar companies’ development plan is approved, that land would be worth a lot more — making it more expensive for the state to purchase.

In November, Florida voters overwhelmingly passed an amendment designating billions in state funds for land conservation, which would enable the state to exercise its remaining options to buy Everglades land from Big Sugar. Jonathan Ullman of Sierra Club Florida says, “Environmentalists cheered because it was something that had been needed for so long. The land would be used to create reservoirs to store water and [to create] stormwater treatment areas … The alternative to buying the land meant worsening Everglades drought and pollution, continued coastal pollution and marine die-offs and the threat that it could be developed, cutting off the Everglades from Lake Okeechobee, its water source, forever.” That latter alternative is what U.S. Sugar wants, which is why it and its Tea Party lackeys paid people to “protest” outside the relevant government authority.

It’s a free country and everyone has the right to protest, no matter how stupid or selfish the cause. But if you can’t find a few dozen concerned citizens to hold your banners for free — in a state filled with retirees, no less — then perhaps instead of hiring actors you should acknowledge that the public isn’t on your side and give up.