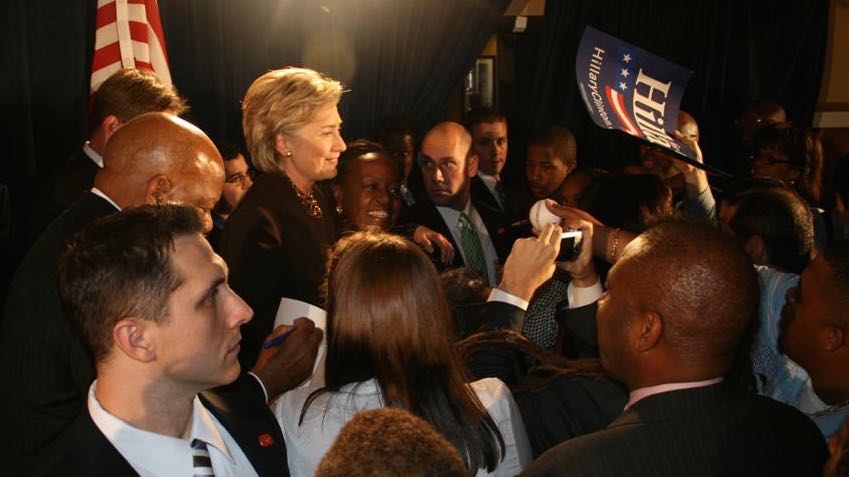 Remember 2008? That moment when an underdog senator named Barack Hussein Obama won the Iowa primary, and suddenly people were like, “Oh snap! He might have a chance!”? If you were working at any kind of left-leaning organization at that time, you may have noticed this Rapture-like effect where suddenly your staff was about six people light because people were leaving their jobs to join the Obama movement. African Americans and Latinos were heavily drawn to, and accepted by, the campaign.

Now that Hillary Clinton has officially announced her campaign to become Obama’s successor, the overarching question is whether she can create the same kind of rainbow campaign coalition as her predecessor. For one group of prominent politicos of color, the answer to that question is, “Yes, she can.” That group, called Inclusv, launched in March with the mission “to ensure staff, consultants, and vendors of color are found at every professional level within advocacy, policy, and campaigns and elections.”

It was founded by Quentin James, who was part of that first class of 2008 Obama campaign staffers, and who most recently worked as the outreach director for African-American and environmental affairs for the Ready 4 Hillary political action committee. Before that, he served as national director of Sierra Club’s Student Coalition where he led campaigns to oppose construction of the Keystone XL pipeline and to push colleges to switch from fossil fuels to renewable energy sources. So it follows that James is interested not only in getting people of color onto Clinton’s staff, but also people who are invested in realizing her campaign’s priorities around climate change and clean energy.

“What Inclusv can help out with is the supply of talented people of color, and vendors who have transferable skills from working on political campaigns to working on environmental campaigns,” James said in an interview this week.

James is joined in this Inclusv venture by Alida Garcia, who worked on Obama’s 2012 reelection campaign, helping ramp up Latino voter engagement strategies. Part of that has meant helping campaigns understand that Latino voters are just as concerned about climate change as Americans in general, if not more.

“In the last couple of years, we’ve started to hear a more robust conversation about where and how climate change impacts people of color,” said Garcia. “More inclusive hiring is going to help further that mission of making the issue more broadly received as a priority issue in the day-to-day conversations of families of color across America.”

Founding members also include Steve Phillips, a political donor known for leading a number of political action committee initiatives aimed at electing candidates of color, and Gregory Cendana, who co-chairs the D.C. Asian American and Pacific Islander Democratic Caucus and was a delegate at the 2012 Democratic National Convention. The idea is for these four to leverage the relationships and partnerships they’ve formed throughout their enterprising careers to help emerging leaders of color recreate the same kind of multi-racial political energy felt during the Obama years.

The Inclusv website is their vessel for cultivating this change. Prospective campaign staffers can upload their resumes to the site, and they’ve already fielded over 600 since going live in late-March, they say. Minority business owners and independent contractors can also submit their contact information to a database at the site so they can be considered as vendors or consultants for campaigns. While the group’s focus is the 2016 presidential election, with Clinton’s campaign in mind, the information gathered can also be plucked by non-presidential campaigns and political organizations looking to diversity their staffs.

The Clinton campaign has already met with Inclusv members, as Darren Sands reported at Buzzfeed last week. There’s been no reach-out from the Rand Paul and Marc Rubio campaigns yet, the Inclusv founders tell me, but their current focus is on the Democratic Party — not purely for partisan reasons, but because Democrats are as problematic when it comes to diversity as their counterparts, if not worse. As Phillips told Buzzfeed:

“I’m genuinely concerned progressives are going to lose elections if we don’t increase our cultural competence in campaigns,” he said. “That’s what happened in 2010 and 2014, those campaigns were unable to inspire turnout of voters of color.”

In the 2010 mid-term elections, when Democrats got pummeled at the polls and the Tea Party nation premiered, pundits blamed low turnout, particularly among voters of color in certain places. There was hardly better turnout in 2014. This is historically true of most mid-term elections. But the hope in 2010 and 2014 was that Democrats could capitalize off of the electoral enthusiasm the Obama campaigns captured, especially among African-American and Latino voters. When that didn’t happen, some political scientists blamed voter apathy or disillusionment.

However, some Democrats simply failed to build the Obama-brand of multicultural infrastructure for the midterms, meaning they didn’t aggressively hire people of color for the campaigns or contract with minority entrepreneurs. One example is the Democratic candidate Alex Sink, who ran for Florida governor in 2010, and then ran for a U.S. House seat during a special election in 2014. She was favored to win both races, but didn’t prevail in either. In both cases, she was criticized for failing to do the kind of outreach and recruitment to communities of color that many political experts agree are needed to mobilize those populations to the polls.

Clinton can’t afford to make the same mistake if she hopes to win. Inclusv wants to ensure that quality employees aren’t overlooked by Clinton and her party. And for young prospects who lack experience but show potential, the group is working on ways to provide professional development training for aspiring job candidates, to get them up to snuff. They also will track those who land campaign jobs and contracts to help them find employment when the campaign ends. Basically, this will be about changing a culture where people are hired through good ol’ boy networks to one where people of all backgrounds are truly linked in.

“This is about hiring the kind of leaders who can engage the general electorate on the substantive issues that are disproportionately impacting communities of color,” said Garcia. “It’s really about the voters and the disenfranchised being more engaged by campaigns in substantive and meaningful ways.”