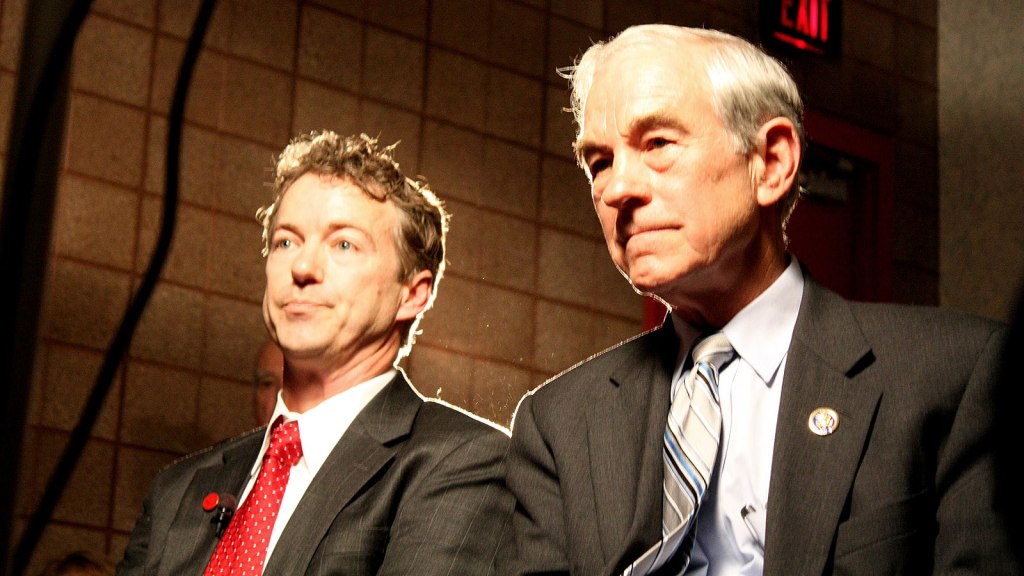 The Ebola epidemic in West Africa is making a lot of people say crazy things. Conservative cable news pundits keep calling for shutting down all travel to and from the affected region, even though experts from the National Institutes of Health have explained that this would make the disease harder to fight.

The outbreak is proving particularly effective at turning people with already far-right views into conspiracy theorists. Sen. Rand Paul (R-Ky.), for instance, is what TPM’s Josh Marshall calls an “Ebola Truther” because he suggested that, contrary to established medical science, Ebola can be transmitted through the air. This meme is also being flogged by an obscure, loony group called the Association of American Physicians and Surgeons, which works to combat “socialized medicine.” Retired Rep. Ron Paul (R-Texas), the hard-right libertarian father of Rand, is a member.

Ron Paul, as it happens, has come out with what might be the most disturbing thing said by any conservative about Ebola, though it hasn’t gotten media attention the way others’ statements have. In his most recent weekly column, Ron Paul declares that “Liberty, Not Government, is Key to Containing Ebola.”

No matter how you feel about, say, funding for the National Endowment for the Arts, containing a deadly epidemic would seem like one of the most obviously appropriate roles for government. Providing a public good like tracking each Ebola patient’s contacts isn’t necessarily profitable for any individual or company, but someone must do it or more people could die.

In fact, Ron Paul thinks the Ebola epidemic shows that regulating airline safety, another widely appreciated government activity, is also unnecessary. “Legitimate concerns about protecting airline passengers from those with Ebola or other infectious diseases can best be addressed by returning responsibility for passenger safety to the airlines,” Paul writes. “After all, private airlines have a greater incentive than does government to protect their passengers from contagious diseases.”

Paul points to a rather unlikely hero of free enterprise to make his larger point:

Firestone Tire and Rubber Company has successfully contained the spread of Ebola among 80,000 people living in Harbel, the Liberian town housing employees of Firestone’s Liberian plant and their families. In March, after the wife of a Firestone employee developed Ebola symptoms, Firestone constructed its own treatment center and implemented a program of quarantine and treatment. Firestone has successfully kept the Ebola virus from spreading among its employees. … Firestone’s success in containing Ebola shows that, far from justifying new state action, the Ebola crises demonstrates that individuals acting in the free market can do a better job of containing Ebola than can governments.

Hmm, Firestone — I seem to remember something else about Firestone and public safety … Oh right, it sold defective tires, which killed more than a hundred people in accidents. Then it covered up the error and did nothing to protect the public until the federal government imposed a recall. Seems like Firestone actually isn’t a good example of a private company that can be counted on to protect the public. It may sometimes choose to do so when it perceives such action as being in its interest. And if it doesn’t? Well, you can either have the government regulate it, or you can let the company kill people.

According to the Paulite ideology, there is no need to regulate safety procedures on oil rigs, because it’s in an oil company’s interest to prevent explosions and spills. Ask anyone on the Gulf Coast how well that has turned out. Just last month, a federal judge ruled that BP bears responsibility for the Deepwater Horizon spill due to its negligence and profit-driven desire to cut costs.

Even aside from the fact that history is riddled with instances of companies neglecting public health, safety, or environmental protection, this extreme anti-government ideology has no answer for situations in which the negative externalities from corporate greed or incompetence are diffused and hard to recover in court. Global warming, for example, does not lend itself so easily to Paul’s framework. But, rather than coming up with a more nuanced position for that problem, Paul, his son, and other right-wing Republicans wave it away by denying that climate change even exists.

Ron Paul’s extremism is so well-established by now that the media ignores his frequently alarming statements, especially now that he is no longer in office.

Rand, however, is the subject of much fascination since he is widely viewed as a top-tier candidate for president. As The Washington Post notes, he is at least tied for first place in polls of the first two Republican caucus and primary states, Iowa and New Hampshire, and he is a popular second choice among GOP voters. A recent profile in The New Yorker explains that Rand has taken pains to disguise some of his less popular positions, but he has spent his entire life working on his father’s campaigns, and he and his close associates say there is no major ideological difference between them. The Pauls are also working to remake the GOP in their image. They have successfully promoted like-minded candidates like Rep. Justin Amash (R-Mich.), and their followers have taken over state Republican parties like Maine’s.

Rand Paul is shrewd enough not to say what Ron did about Ebola. But his belief system is the same. And his father’s latest missive is a taste of the dangers a Rand Paul presidency would carry for the environment, public health, and public safety.