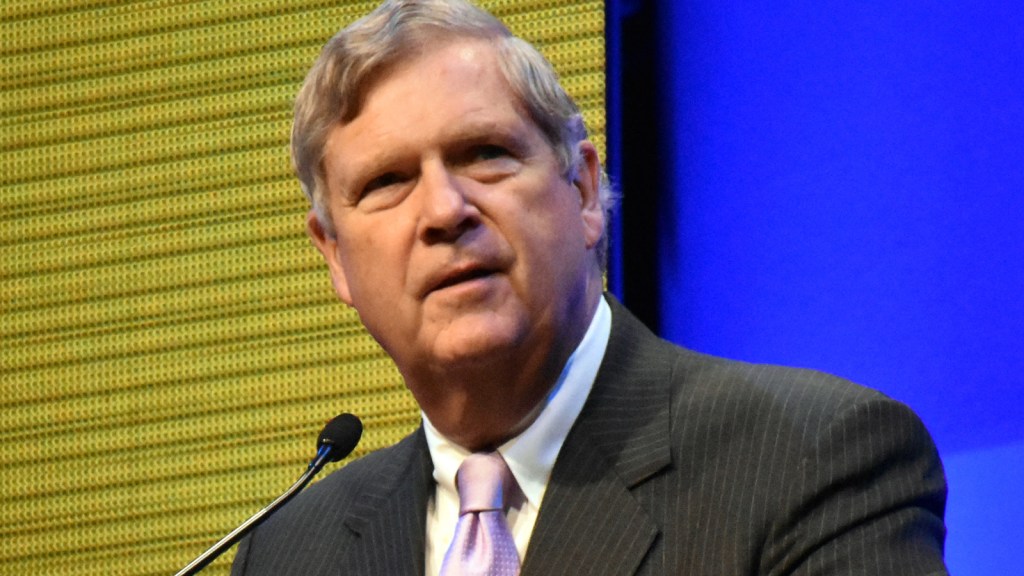 Even before the election, food luminaries had started brawling over Obama’s legacy. In a New York Times Magazine cover story, author Michael Pollan accused the administration of bowing to the demands of corporate agribusiness. “They went wobbly in the knees,” former Sen. Tom Harkin said in the piece. Sam Kass, the former White House chef and food czar, fired back, saying that people like Pollan dismiss steps forward because they fall short of their “idyllic” vision of farming. “We are so good at turning our wins into losses, it’s stunning,” he said. (Here’s an elaboration of Kass’ case).

Then America elected a president who loves fast food and overcooked steaks. While Donald Trump has explicitly pledged to roll back Obama’s actions on climate change and health care, he hasn’t said what he’ll do on the food and ag front. In fact, despite filling out the rest of his Cabinet, Trump has yet to pick a new agriculture secretary, leaving his intentions extra murky. With someone as capricious as Trump at the helm, this is a terrible time to predict the future of American agriculture, but it’s the perfect moment to take a hard look at the past and ask what policies have made a difference.

Former Iowa Gov. Tom Vilsack served as ag secretary for the entire eight years of the Obama administration — outlasting all other Cabinet members. Appointing Vilsack to lead the department was arguably the biggest farm policy decision made by the outgoing president: The massive Department of Agriculture runs everything from nutrition policy to farm conservation programs.

Vilsack and I discussed the Obama administration’s record on reducing the environmental footprint of food and ag. We had half an hour — not enough time to delve into every campaign promise and thwarted initiative — so I asked Vilsack what real progress he would point to to define the administration’s legacy.

Vilsack said the administration had succeeded in moving the needle in several ways: by working collaboratively — rather than via confrontation — for conservation, by stimulating new business in rural economies, by making climate action part of the culture at the USDA, and by helping poor people get healthier food. He also discussed bridging the growing divide between the priorities of farmers and the priorities of consumer groups.

In preparation for our interview, I contacted farmers, food policy experts, environmental activists, and industrial ag reps from across the spectrum. They had widely different views, but pretty much everyone said they liked Vilsack: People appreciate his straightforward, square-dealing style.

As a reporter, I appreciate him, too — he responded to my questions directly, without sidestepping or reframing, using evidence and detail to defend the administration’s environmental legacy. That’s increasingly rare as press and politicians become more confrontational. Here’s a recap of our discussion.

The big picture on conservation

Vilsack preferred to wield the carrot rather than the stick in trying to protect the environment. The USDA rolled out one voluntary rule after another, emphasizing cooperation and partnership rather than regulation and enforcement.

Some environmental groups say this was a mistake. Take a look at USDA data and you’ll see that since Obama took office in 2009, farmers have converted an area the size of Kansas from prairie and range to row crops. Similarly, U.S. Geological Survey measurements of fertilizer and manure in the Mississippi (where a lot of the Farm Belt’s runoff winds up) keep rising.

“Well, I’d put a cautionary note on that,” he said. He didn’t dispute the numbers, but suggested another way of looking at them: The amount of land required and pollution created per unit — of food, fiber, and fuel — that farmers grow.

Calculated that way, you can make a case that the numbers are going down, he said. For example, corn yields keep going up, but the amount of fertilizer used per acre has been steady since the late ’70s. That means we’re using less fertilizer to grow each kernel. It’s only because America is growing more crops that the absolute pollution numbers are increasing.

Record corn prices from 2011 to 2013, driven by the world’s growing appetite for meat and biofuels, encouraged farmers to plow up more land. Now that prices have dropped, the USDA is seeing “incredible interest” in conservation programs that pay farmers to keep erodible acres and important habitat wild, Vilsack said.

“We do know from assessments that we’ve made that it isn’t a single conservation practice that’s gonna do the trick,” Vilsack said. “It’s combinations working in concert: It’s not just no-till or cover crops, but also buffer strips. Not just buffer strips, but also better irrigation systems and different crop rotations.”

Farmers have been using these practices as part of the ecosystem-scale regional conservation programs the Obama administration piloted. These efforts pulled in hundreds of millions of dollars from regional partners, and people up and down the food chain cooperated so they weren’t working at cross-purposes. One of those big conservation partnerships is the Chesapeake Bay Watershed Initiative.

The efforts in the Chesapeake Bay region are a model for the rest of the country, Vilsack said. There, “99 percent of the ag acres are now involved in some form of conservation,” he said. The benefits are tangible: “We’ve seen expansion of underwater grassways, we’ve seen improvements of aquahealth — oysters and fish coming back.”

There’s a fundamental change in rural America that empties out small towns: The average American income is rising, but food prices are steady. This means that most farmers need to produce more food and become more automated if they want to keep up with the Joneses — or just stay on the farm.

The administration had a hand in creating new markets for rural sectors by promoting exports and breaking down trade barriers, Vilsack said. Total U.S. ag exports topped a record $1 trillion during the Obama years. The administration also poured $1 billion into local and regional food systems, leading to new farmers markets and farm-to-school programs.

“The poverty rate has dropped rather significantly, and I’ve been told that it’s the steepest drop we’ve seen in 25 years.”
Tom Vilsack

Research and policies that nudge businesses to turn agricultural waste into fuel, chemicals, or material spurred what Vilsack calls the “bio-economy.” And although it started growing before 2009, “There is now almost a $400 billion bio-based industry,” Vilsack said. “It employs 4 million people. And some of those people are being employed, some of those opportunities are being created in rural areas.”

Vilsack reeled off statistics as evidence that the USDA’s efforts were successful. Rural unemployment dropped from 10 percent in 2009 to 5 percent today — about the same level it was before the Great Recession.

“The poverty rate has dropped rather significantly, and I’ve been told that it’s the steepest drop we’ve seen in 25 years,” he said. “You mentioned food insecurity: lowest rate among children ever. And the population declines that rural America was seeing just a couple of years ago have now been essentially halted.”

Then, in the closest he got in our conversation to taking a jab at Trump, he added: “Now if tomorrow, if all of this investment and all this effort is abandoned, one can expect that we’ll see a return to the higher rural unemployment, higher poverty rates, more food insecurity, and kids feeling that they don’t have options.”

A culture of climate action

When I asked him about his environmental legacy, Vilsack started his answer with the climate.

“First and foremost, within the department, we have a greater awareness of a changing climate,” he said. To turn awareness into action, the USDA set up 12 climate hubs across the country, which provide practical information to farmers and foresters trying to deal with climate change. The agency also rolled out a voluntary plan that is supposed to trap 25 million cars worth of greenhouse gases by 2025.

The USDA contains the Forest Service, and the administration made a new policy which — for the first time — makes forest managers plan for water conservation and a changing climate. Outdated planning rules and drought have led to massive wildfires in recent years.

Additionally, the USDA directed money to research on everything from renewable energy, allergen-free peanuts, carbon capture in soils, to wooden skyscrapers. And there are lots of other cool ideas in the works (seriously, it’s neat stuff — check out Vilsack’s essay on food and ag innovation).

When it comes to environmental justice, both Vilsack and Obama made it a priority to improve options for people living in food deserts, and for those who simply couldn’t afford good food. There are 8 million fewer people struggling to feed themselves than there were eight years ago.

The USDA has opened up access to food assistance by pushing the states to do a better job, so that people who qualify for the Supplemental Nutrition Assistance Program (aka food stamps) get help. In 2009, roughly 72 percent of people who were eligible for the program received assistance. Today that percentage is around 85 percent, Vilsack said.

The USDA has also expanded what people can buy with that assistance. More than 1,600 farmers markets now have machines that allow people to pay with SNAP cards.

“Finally, we have been encouraging grocery stores to locate high-poverty areas where they have been absent, and working to expand the food choices that people have from convenience stores where they are the only food source,” Vilsack said.

Organic? Industrial? What about just pragmatic?

There’s a growing divide in the U.S. between farmers and eaters. Urban foodies rail against industrial ag and call for more rules, while many farmers view any attempt at regulation as creeping tyranny. It’s a tough conversation to mediate, because it’s made up of a lot of shouting and very little listening.

I asked Vilsack if he had made in progress in refereeing that debate and finding common ground. He chuckled and said he had been thinking a lot about this. We’re going to have to learn how to communicate if either side wants to make progress, he said — and he told the story of cage-free eggs to demonstrate his point.

Lots of food companies have promised to stop buying eggs from hens kept in small cages. But it looked like they were setting themselves up for failure because no one had stopped to ask where all the cage-free eggs were going to come from.

“So I asked the question: How many commitments of this kind have been made and how many eggs are we going to have to produce?” he said. “It means going from 17 million layers today in cage-free environments to over 200 million. It means that the people raising these hens have to invest at about $8 billion in changing the way in which their hens are treated.”

As this flow-chart illustrates, it’s pretty risky for farmers to make the switch and become a cage-free operation. So there’s a real chance that this national movement could fail because there simply won’t be enough cage-free eggs to go around.

The solution is to get everyone around a table to figure out a plan that won’t crash and burn, Vilsack said. He started that process by convening meetings of activists, farmers, and food industry leaders.

If we’re going to move agriculture forward, Vilsack said, the conversation has to include not just what’s moral, but what’s physically and economically possible. And that’s true whether we’re talking about conflicts as small as an egg or as large as the 6,000 square-mile deadzone in the Gulf of Mexico.