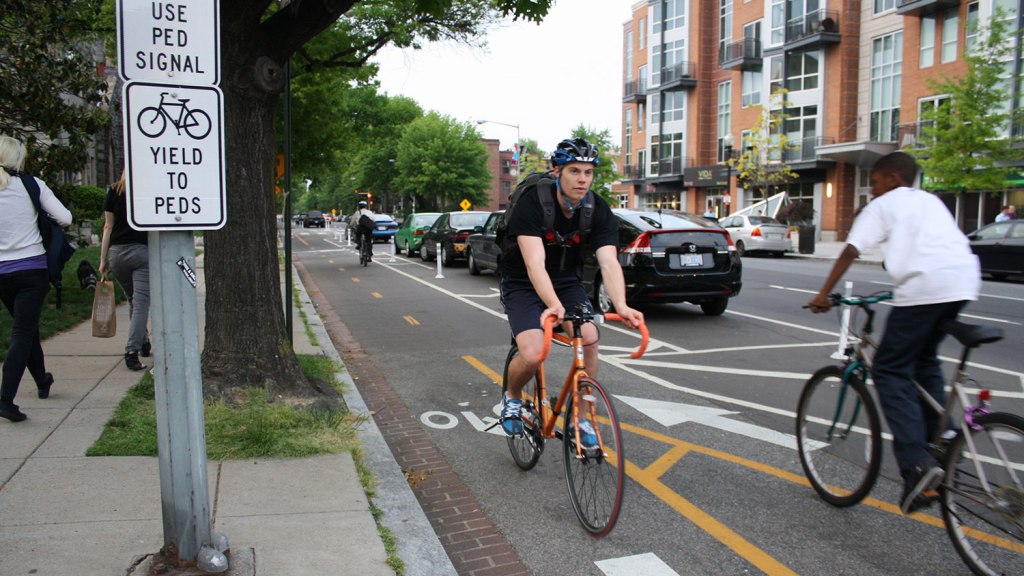 It's not just about cars. Elvert Barnes
Politics

As usual, reauthorization of the law governing federal transportation spending is long overdue, caught in D.C.’s gridlock. But on Thursday the Senate did its part to break the impasse: It finally passed a six-year transportation bill, which includes some surprisingly good provisions for the environment.

Although it remains to be seen what the more conservative House of Representatives will do with the bill when they take it up this fall, results from the Senate suggest that the trend toward suburbanization has gone as far as it can and is now starting to bend back. Rampant sprawl once meant that Republicans were adamantly opposed to transit and to bicycle- and pedestrian-friendly streets. Now, sprawl is so widespread that even many people who can’t or don’t drive live in suburbs and sprawling Sun Belt cities, and their legislators have an incentive to reallocate transportation dollars in ways that serve them as well as drivers.

But before we go into detail, let’s start with a little basic background: Historically, the bipartisan compromise on transportation was that the money collected by the federal gasoline tax was doled out to states in formulas that allocated about 80 percent to highways and the rest to mass transit. Since all members of Congress needed highways or transit in their districts, this wasn’t a terribly complicated or partisan issue. Then two things happened.

First, in 1994, the GOP took over Congress on a wave of angry reactionary politics. Led by Newt Gingrich, they proposed repealing the last gasoline tax increase, from 1993. Though they failed at that, they stopped a new gas increase — and ever since, Republicans have refused to allow the gas tax to go up, even to keep pace with inflation. The result is that the current 18.4-cent-per-gallon gas tax brings in less revenue in absolute terms than it did 20 years ago — thanks to more efficient cars and a dip in vehicle miles traveled — and the shortfall is even bigger in relative terms because of inflation. So transportation funding is squeezed, and passage of a comprehensive transportation bill has been stymied by Congress’s inability to find a new funding mechanism.

Then, in the last 10 years or so, liberals and environmentalists have become more attuned to the importance of regional planning and transportation policy. Congressional Democrats have pushed for rules in the transportation reauthorization that put more resources and thought into how we can accommodate non-drivers. Also, the transportation funding shortfall has led them to think hard about how to get the most bang for our transportation buck, which tends to mean transit projects, multimodal streets, and road maintenance in denser, built-up areas rather than new roads in far-flung suburbs.

This has provoked the predictable backlash among Republicans and conservatives, who see any smart growth policy as part of a global communist plot to force everyone into high-rise apartment buildings. So the issue became paralyzed in Congress by Republican extremism on both fiscal and cultural politics.

Unable to pass a full reauthorization bill, Congress has kept the transportation dollars moving through a series of short-term extensions, which makes long-term planning impossible for the state and local governments that depend on the money. The most recent extension, for three months, was just signed by President Obama on Friday so that the House will have time to pass a companion bill to the long-term reauthorization just passed by the Senate.

The Senate’s bipartisan compromise was negotiated by Senate Majority Leader Mitch McConnell (R-Ky.), Environment and Public Works Committee Chair James Inhofe (R-Okla.), and the committee’s ranking Democratic member, Barbara Boxer (Calif.). That’s an unlikely trio: Boxer is a leading climate hawk, while Inhofe is the Senate’s most asinine climate science denier. The bill authorizes a total of $350 billion in spending over six years. That’s almost $100 billion more than what the gas tax is projected to bring in over that time. The first three years of additional funding, just under $47 billion, will be raised through a series of other revenue increases and cuts to spending on other programs, such as reducing dividends paid by the Federal Reserve to member banks and selling off a portion of the Strategic Petroleum Reserve. For the latter three years, no additional funding source is specified to cover the authorized spending. Congress will have to come up with another $50 billion or so between now and then, and it’s not clear where it will come from.

Whether this Senate bill constitutes good news depends on your expectations. While it’s an improvement over the dysfunctional status quo, it falls far short of the total spending needed to fix our gaping transportation infrastructure deficit.

But there is good news for urbanists and environmentalists in the bill’s details. Here are the three big victories:

There were disappointments in the bill for smart growth advocates too. The total allocation to the TIFIA program was cut, and the competitive TIGER (Transportation Investment Generating Economic Recovery) grant program — which incentivizes the most efficient transportation projects — wasn’t made permanent. That means there will be annual appropriations fights over TIGER if this bill passes into law, but it was actually a triumph just that the program wasn’t eliminated altogether. There were some big-picture reforms that fell short too: Transportation policy experts say that it is inefficient how the law currently routes funding almost entirely through state departments of transportation rather than directly to local communities. There is also a general lack of accountability for performance or return on investment. Amendments to address those problems failed, although some minor progress is being made on data collection and analysis.

But the saddest thing about this bill is not these shortcomings; it’s that the legislation must now go to the House with its more conservative Republican caucus and total lack of power for the Democratic minority. If the House can even manage to pass a transportation bill, it will be worse than the Senate’s.