In early August, Ginny Kerslake’s lush green yard in a middle-class Pennsylvania suburb turned into a muddy river, thanks to another spill at the pipeline drilling site opposite her house. A couple of days later, 10,000 gallons of drilling mud, or bentonite clay, contaminated a popular recreational lake that also provides drinking water for residents of Chester County.

The spills are down to construction of the Mariner East (ME) pipelines — a beleaguered multibillion-dollar project to transport highly volatile liquids extracted by fracking gas shale fields in western Pennsylvania to an export facility in Delaware county in the east, ready to ship to Europe to manufacture plastics.

In Pennsylvania, four years after Trump beat Hillary Clinton by 44,292 votes to win the state, the controversial pipeline project has helped make fracking a political flashpoint in the debate over energy, the climate crisis, environmental inequalities, and the influence of big business.

Fracking was a hot topic in this week’s vice-presidential debate, and the Republican party has blanketed the state with ads falsely claiming a Biden administration would ban the practice. Climate activists were unimpressed by the debate but like many anti-fracking voters, Kerslake is hopeful that a Democratic administration might, at least, be persuadable on the issue.

“The direct impact in our township has opened our eyes to how elected officials and government agencies we expect to protect us but don’t … Without fracking, there are no pipelines and vice versa,” said Kerslake, speaking in front of the noisy, unsightly drilling site, which can operate from 7 a.m. to 7 p.m. six days a week.

The ME horizontal directional drilling (HDD) project — which is subject to multiple criminal and regulatory investigations — has caused major disruption to dozens of suburban and rural communities, contaminated surface and groundwater sources in hundreds of mud spills, and created countless sinkholes in parks, roads, and yards since construction began in early 2017.

At least 105,000 people live within a half-mile blast radius of the ME pipeline system, which carries highly flammable, odorless, and colorless gases in liquified form; many more Pennsylvanians attend schools, libraries, and workplaces in close proximity.

Pennsylvanians suffer the country’s second-worst air quality, thanks to greenhouse-gas-emitting industries, and according to one recent poll, 83 percent of voters in the state think climate change is a serious problem and 58 percent look unfavorably at lawmakers who oppose strong action to combat it. 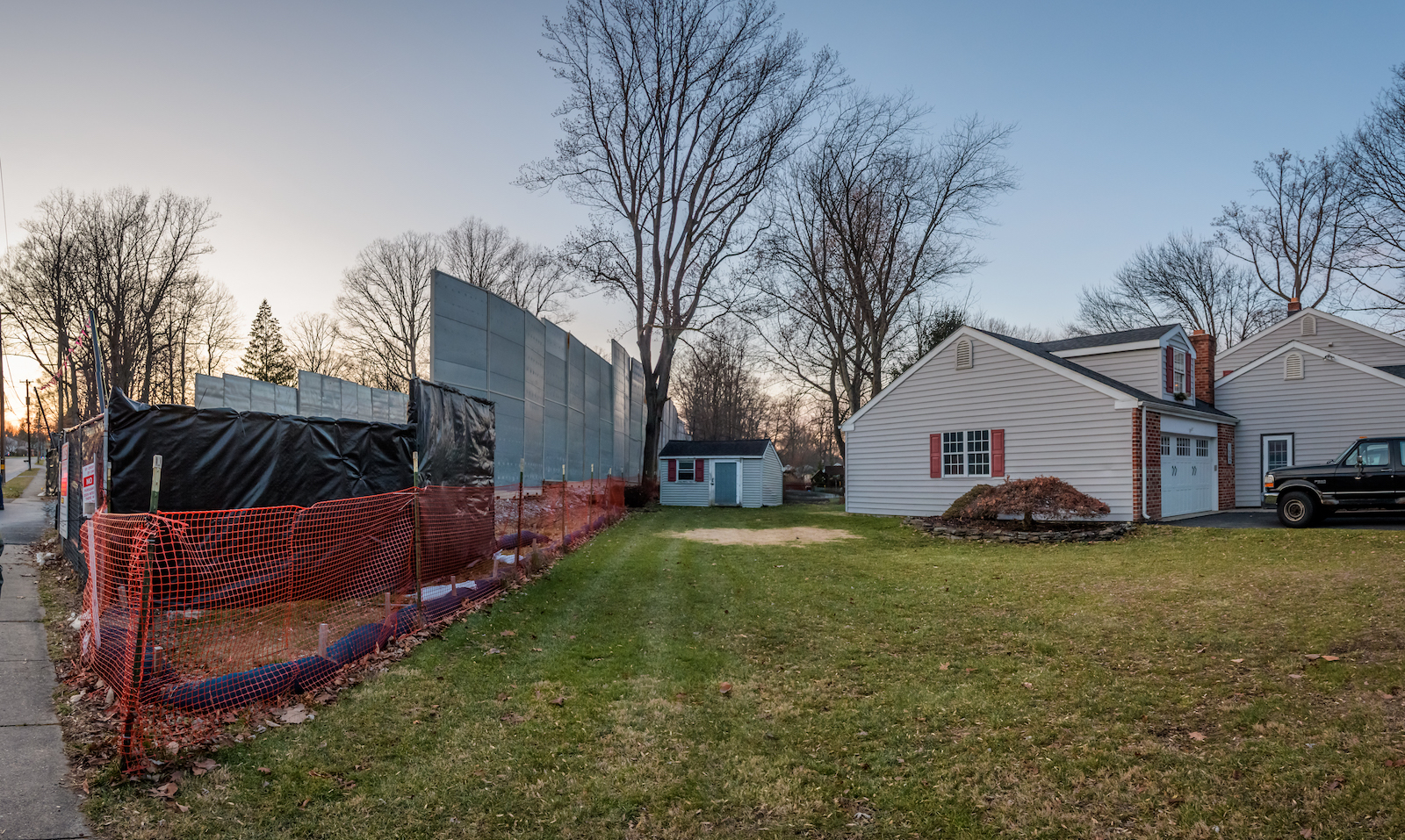 “The push to make Pennsylvania a petrochemical hub is mostly about producing single-use plastics, not cheap energy to heat our homes, and expanding fracking will tie us for years to climate change gases. This is not what most Pennsylvanians want, but there’s a gap in understanding,” said Kerslake, who was defeated in this year’s primary for state representative after conservative nonprofit groups linked to the natural gas industry funded half a million dollars’ worth of attack ads against anti-pipeline candidates.

Chester county, a semi-rural middle-class area with about 525,000 inhabitants, mostly white but with growing Latino and Asian populations, is a swing county: In 2012, Obama narrowly lost to Mitt Romney, but four years later it was the only county Hillary Clinton flipped in Pennsylvania, winning by almost nine points.

It wasn’t enough: Clinton failed to hold on to the state won twice by Bill Clinton and Barack Obama after hemorrhaging voters in rural and suburban districts. Until 2016, Pennsylvania had voted for the Democrat in six straight presidential elections, but the party’s decline was a long time in the making.

“Pennsylvania has been bleeding out Democratic voters for decades. It’s insane to think the Democrats can win here in the long term without winning over more working-class voters … not being Trump isn’t enough,” said Jonathan Smucker, co-founder of the grassroots movements Lancaster Stands Up and PA Stands Up.

An average of national polls on Friday showed Joe Biden leading Trump by more than 10 percentage points, but only 7.1 points in Pennsylvania, according to the website FiveThirtyEight. This is up from 4.2 points last month.

Analysts agree that Pennsylvania is a must-win state this November if the Democrats are to take back the White House, which means Biden convincing urban and suburban voters concerned about the climate crisis and the economy that his ambitious $2 trillion climate plan is also an ambitious jobs plan.

But it’s unclear whether the messaging is getting through, as campaigning is overshadowed and hampered by the COVID pandemic.

Joan, 53, a librarian who declined to give her full name, said the climate crisis had been surpassed by immediate concerns. “I worry about the health and safety of the pipelines and climate change, but most people are overwhelmed by the immediacy of the pandemic and unemployment and voting — it’s too much to navigate,” she said.

Multiple pipelines run about 50 feet from the library where she works, visited by about 50,000 people annually.

“The climate crisis is a very big problem, and I worry about environmental destruction, but what are the alternatives? You have to provide energy,” said Gwen White, 74, a retired banker, who plans to vote for Biden but was unaware of his climate plan.

Trump, on the other hand, is sticking to his plan of appealing to his base by falsely claiming Biden will destroy hundreds of thousands of jobs and make heating unaffordable by banning fracking.

Despite Trump’s chiding, Biden is largely supportive of fracking, and only backs banning it on federal lands and offshore, which would have minimal impact in Pennsylvania.

In addition, fracking job figures touted by the industry — and repeated by Trump and Mike Pence — are wildly inflated.

In 2017, only 26,000 jobs in Pennsylvania were directly related to oil and natural gas extraction, of which about 18,000 were created by the fracking boom, according to the Bureau of Labor Statistics.

“Fracking creates boom towns and bust towns. It’s never been a stable industry, and requires taxpayer subsidies to function. Pennsylvania is the reason why Trump is talking about fracking, but he’s out of touch with public opinion,” said Sam Bernhardt, political director of the advocacy group Food and Water Watch.

According to a recent CBS/YouGov poll, 52 percent of voters in the state oppose fracking, mirroring a gradual shift against the industry amid mounting scientific evidence of poor air quality and health risks and relatively few long-term jobs.

But Trump’s messaging does resonate with some voters — or at least sows enough doubt to cause confusion among voters like Dave Swavely, 54, a writer who says the Bible guides his voting, which is mostly for Republicans.

“I do care about climate change, and it should be debated [by the candidates], but natural resources are here for humans to use, and I’m skeptical of the environmental agenda. I don’t believe Trump or Biden, unfortunately, but I’ll pray and then vote for the lesser of two evils.”

Nevertheless, some recent polling suggests that a stronger stance on fracking by Biden, as adopted by his running mate, Kamala Harris, would play well with most voters in Pennsylvania, who overwhelmingly support strong climate action and clean energy.

It worked for Danielle Friel Otten of Uwchlan Township, who beat a Republican incumbent to get elected to the state legislature in 2018 in a race defined by opposition to Mariner East.

“Voters have woken up. The jig is up. Americans want to see elected officials represent their voices and not be beholden to big industry interests,” said Otten, who also lives in front of a drilling site. “The pipeline project is an example of how our constitutional rights, like health and safety, have been chipped away. It’s why we have to stand up and fight for every vote.”

Amanda Gorgueiro, spokesperson for Energy Transfer, the parent company of the ME project, said: “We respect that there are varying opinions when it comes to our country’s energy development, however it is important to remember that pipelines are the safest way to transport the energy products that make our daily lives possible.”