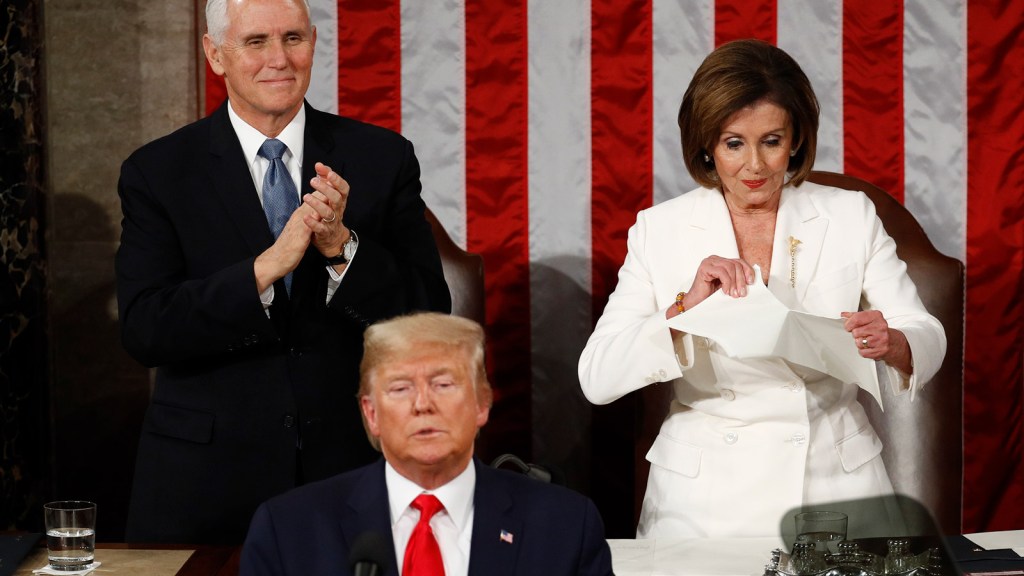 The reality TV president delivered a reality TV State of the Union Tuesday night. Over the course of 80 sometimes raucous minutes, he awarded a school voucher to a Philadelphia 4th grader, had the first lady present conservative shock jock Rush Limbaugh with the Presidential Medal of Freedom, and reunited a military servicemember with his family.

Along the way, he ticked off a checklist of statistics, claims, and promises designed to galvanize his colleagues on the right side of the aisle. The most prominent parts of the speech touted the strong economy, celebrated the administration’s crackdown on immigration, and decried an alleged Democratic attempt to engineer a socialist takeover of healthcare.

One phrase that didn’t pass the president’s lips — to nobody’s surprise — was climate change.

Trump devoted just a few seconds of his address to energy and environmental issues: first by celebrating the massive oil and gas boom that has made the U.S. a net exporter of oil, and later by reiterating his commitment to joining an international initiative to plant one trillion trees worldwide.

The president took credit for the recent increase in domestic fossil fuel production, suggesting that it was his administration’s “bold regulatory reduction campaign” that made the U.S. the top producer of oil and natural gas in the world. But the U.S. actually reached that milestone under the Obama administration. Thanks to the explosion in fracking beginning in 2008, the U.S. became the top producer of natural gas in 2009 and of oil in 2013, according to the Energy Information Administration.

The president then went further, claiming that the boom has made the U.S. “energy independent” — ignoring the fact that the country is still subject to the global oil market, and that turbulence in the Middle East and elsewhere has the ability to affect gas prices in the U.S.

The dramatic increase in stateside oil and gas extraction has also generated environmental and public health consequences that went unacknowledged in Tuesday’s address. Though U.S. emissions likely fell by about two percent last year, those reductions are nowhere close to the cuts required to meet the targets set under the international Paris Agreement, which scientists say are essential to avoiding the most catastrophic effects of climate change. Research also suggests that increased pollution from the oil and gas boom could reverse that fragile progress.

Energy and environment have never been a point of emphasis in Trump’s State of the Union addresses. In 2018, the president devoted just two brief sentences to energy independence, focusing instead on immigration and tax cuts. Last year, too, energy and environmental policies were largely absent from his speech, save the passing mention of “an American energy revolution.”

The Trump administration’s decision to join the World Economic Forum’s initiative to plant one trillion trees worldwide is likely too little, too late. For one, if the U.S. is to compensate for all its 2019 emissions, it would need to plant trees on 371 million acres. That’s double the size of Texas.

Successful reforestation programs have also been hard to implement. Last year, Turkey planted 11 million trees, but according to reports from the country’s agriculture and forestry trade union, the vast majority of the saplings inspected died within just a few months. Trees also take decades to reach their full carbon-combating potential. Trees planted today may not reach full growth for 40 years or more — and that’s assuming they survive disease, wildfires, and droughts.

Then there’s the challenge of accurately monitoring and calculating the amount of carbon dioxide that the trees are pulling out of the air. Reporting by ProPublica and other research has found that many programs have grossly overestimated the emissions reductions from reforestation.

In fact, scientists have suggested that when it comes to climate change, conserving current trees is more helpful than planting new ones. Given that the Trump administration expanded logging in Alaska’s Tongass National Forest just a few months ago, one might be tempted to rip up Trump’s speech in frustration — if House Speaker Nancy Pelosi had not already done precisely that at the end of the address.