If you want to understand how culture can change, head for where the smokers are — or, to be more precise, where they aren’t.

Just a few decades ago, nearly all spaces, indoors and outdoors, were the territory of the smoker. In university classes, everyone, including the professor, would be smoking. People smoked on trains. People smoked on airplanes.

Today, you have to hunt for the smokers. Their exclusion from public shelter means that, often, they’re the only people who actually use the uncomfortable public spaces in apartments and office buildings that were created more to look good in architectural drawings than to be used by real people. As an architect friend of mine once put it, “Gotta love those smokers. They really know how to activate outdoor space.”

What happened? Science happened, definitely. Still, while the first anti-smoking laws in America date back to the 1930s, the bans didn’t truly start rolling until the ’80s and ’90s. It took decades of work after the first conclusive science around the risks of smoking to truly change behavior.

Last year, I interviewed an ad man about what climate change activists can learn from the world of advertising. One of the things he cited as a major problem was that people who talk about climate change don’t repeat themselves enough. “It’s only when you’ve said something so many times that you’re utterly and completely sick of it that someone has even heard it,” he said. Advertising jingles, he added, were a perfect example. 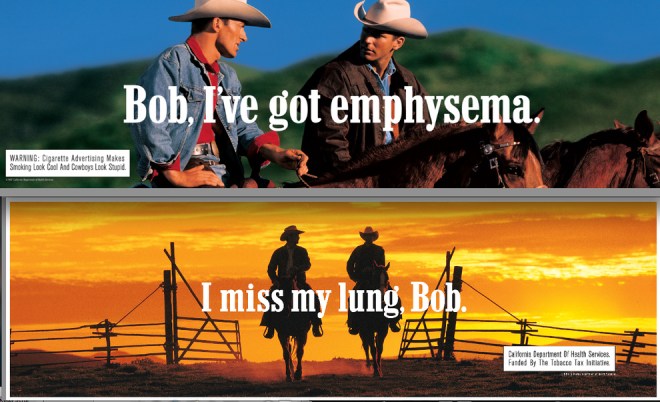 Which is why, when it comes to selling action on climate change, the best past examples of relevant advertising/marketing methods come from the anti-smoking campaigns of the ’80s and ’90s. And the best current examples come from today’s pro-cycling and transit movements.

There is a whole field of research dedicated to studying how to persuade people around climate change. According to Edward Maibach, a professor at George Mason University’s Center for Climate Change Communication, the key to shifting people’s behavior around a difficult issue like climate change is: start with simple messages, repeated frequently, from trusted advisers. Then, make “the behaviors we are promoting easy, fun and popular.”

First, about those advisers. In the world of advertising, a trusted adviser is often a celebrity. Because we’re used to seeing their faces a lot, celebrities are the closest approximation we have to a friend that happens to be shared by a whole lot of people. But a trusted adviser can also be a relative, or a friend, or someone within an extended social circle. Peer-to-peer sales operations like Mary Kay and Amway exploit connections like this.

Doctors are also trusted advisers, which is why they’re courted so hard by pharmaceutical reps. When doctors went from advertising cigarettes to advising their patients not to smoke and even actively campaigning against them, it was a cultural turning point. 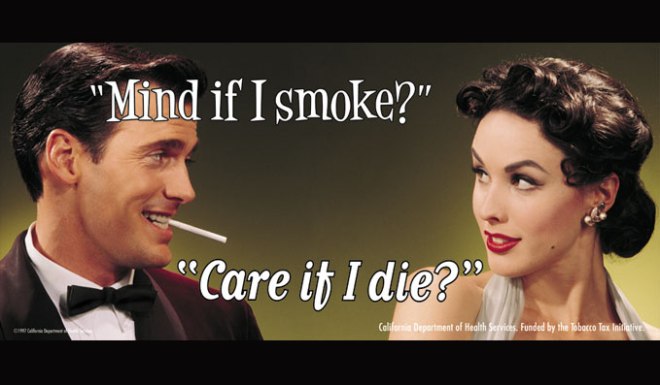 In political campaigns, ministers and other people who can round up a significant number of voters are often wooed as the “trusted advisers” of choice. When I worked on a public health education project in college, educational outreach was handled by hiring as many old ladies in a particular neighborhood as possible to invite people over, feed them snacks, and talk to them about things like the awesomeness of taking prenatal vitamins. The theory was that people would be more likely to listen to someone who seemed like their grandma, even if she technically wasn’t.

The gay rights movement was perhaps the most effective user of the “trusted adviser” model. When the only visible gay people were hustlers and people who got rounded up in bar raids, it was relatively easy to pass anti-gay legislation. But after numerous Californians came out during a campaign against 1978’s Prop 6 (also known as the Briggs Amendment), which would have put schoolteachers at risk of losing their job for being gay, or even for having gay friends, leaders like Harvey Milk realized that having outwardly gay supporters was far better than having quiet allies.

In a speech right after Prop 6’s defeat, Milk put it this way.

It was a devastatingly simple strategy, and it worked. In general, people tend to trust their own family and friends more than outsiders. Relative to other groups whose ideas or existence made mainstream society uncomfortable, gays had a card up their sleeve: Even if they were only 3.8 percent of the overall population, gayness was widely distributed enough that the odds of anyone having a gay friend or family member was high. All gay rights activists had to do was convince those people who were gay that being gay wasn’t so bad, and that they needed to tell their friends and family that it wasn’t so bad. It’s not a coincidence that Pride festivals — essentially, giant parties with an at-times-difficult-to-discern social justice theme — were the most accessible and visible aspect of gay culture for a long time.

Plenty of attempts have been made to make fighting climate change seem equally fun. But there’s something about climate change and giant festivals that doesn’t quite work, if it ever did. Maybe it’s the trash they leave in their wake. Maybe it’s that environmentalism doesn’t have good enough techno.

Where is the fun in fighting climate change? As an avid cyclist, I might be biased here — but I do think that the bike culture that has blossomed over the last decade could teach environmental activism a thing or two about fun. When I started biking in the city in the early 2000s, it was a mean business, full of adrenaline and confrontations with drivers. Since then, America’s cities haven’t exactly gone full Amsterdam, but these days, biking is more and more likely to actually be a good time — something that you can do with your friends, in your party dress, while admiring each other’s rides. 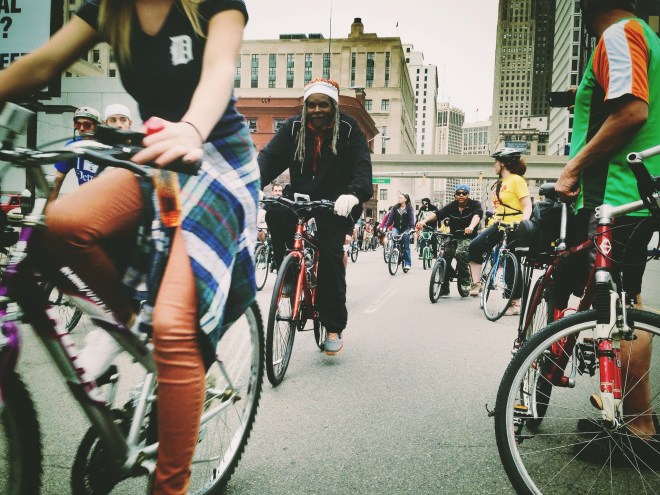 I’ve seen way more enthusiasm for events like Slow Roll Detroit than I’ve ever seen over Earth Day. I never had a cheerful conversation with a New York City cabdriver until I rode by one on a Citibike: He yelled out the window that it was a beautiful day, and that he couldn’t wait to get out of a cab and start biking. Bike-share systems in particular were a genius move — in lowering the bar for biking in the city, they have offered more people a sample of its appeal.

Non-smoking buildings gave people a taste of what fresh air indoors was actually like. The parks system gave people a sense of what the landscape was like when people couldn’t just build houses and farms and coal mines all over it. A safe and pleasant network of bike paths can provide a glimpse of what errand-running around the city can be like without constant fear of death.

The same thing could happen with public transit. Right now, people use it out of necessity rather than pleasure. But long-distance driving is rarely done for pleasure these days, and public transit offers many opportunities for work (what if internet on commuter trains was actually fast and reliable?) and for socializing (what if commuter trains experimented with amenities like bookmobiles, pop-up food sales, or bar cars during peak commute hours?). Cars once edged bikes and pedestrians out of public space by making people who were opposed to them seem like Luddites and hayseeds. A cultural shift like that could be reversed, pushing private cars in cities to the margins.

Every year, the space allotted to smokers seems to get smaller. When I first arrived in San Francisco, a resistance to a citywide ban on indoor smoking was still being fought by a few bars; if you looked around a bar and saw an ashtray, you could assume as a smoker that you had found a sympathetic business establishment. Then ads began to appear in the local alt-weeklies with a dedicated hotline number to report bars that were allowing people to smoke. Within a year, the last of the crystal ashtrays had disappeared.

As someone who grew up around cigarettes and smokers, I sort of miss them. But not enough to want to bring them back.