Why Michigan's Republican governor supports clean energy -- or does he? 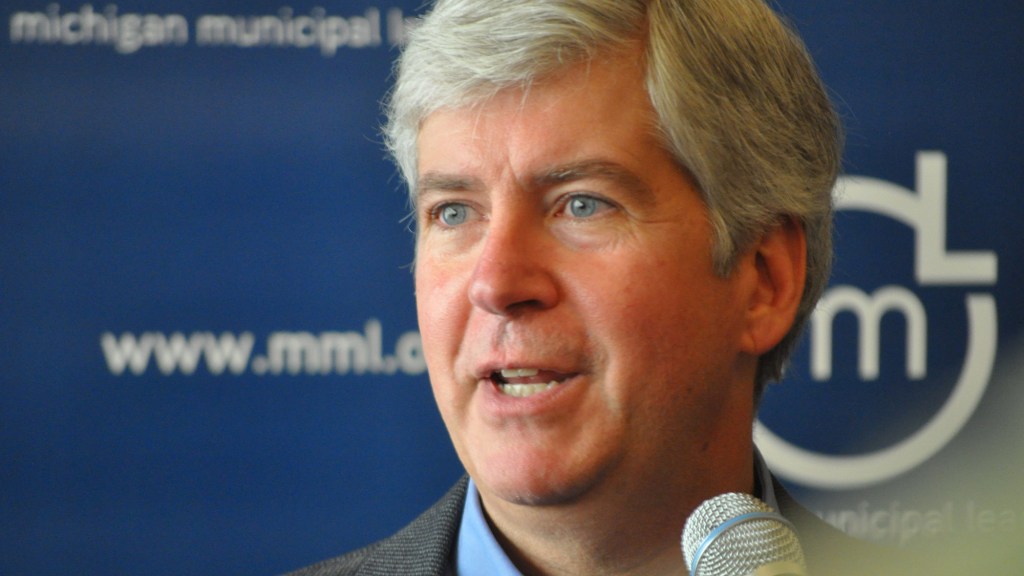 Why Michigan’s Republican governor supports clean energy — or does he?

Michigan Gov. Rick Snyder is not what you would call a progressive, on the environment or any other issue. A venture capitalist elected in 2010 as a Republican, Snyder opposes abortion rights and has cut business taxes and government spending. Upon taking office, he directed state agencies to loosen rules for approving new coal-burning plants and reversed their previous rejection of two proposed coal plants.

In 2012, Michigan environmentalists pushed a constitutional amendment onto the ballot that would have strengthened the state’s renewable energy portfolio standard, requiring 25 percent clean energy by 2025. Snyder opposed it, and it failed.

But this past month, something remarkable happened. Snyder gave a speech announcing a commitment to weaning Michigan off coal power and replacing it with renewables, and reducing demand through energy efficiency. Snyder called on the legislature to pass a bill by 2015 setting a higher renewable portfolio standard, although he did not specify a target. He also emphasized his desire to transition away from coal, saying, “There is an opportunity to really reduce the amount of coal we use in terms of energy generated in Michigan. I’m very excited to see that percentage go down very significantly over this next 10-year horizon because coal is not a preferred fuel for a variety of reasons.”

Nor is Snyder the only Republican in Michigan who supports renewables. It was a Republican legislature, in cooperation with Snyder’s Democratic predecessor Jennifer Granholm, that passed the current renewable standard. And a group called the Michigan Conservative Energy Forum recently launched to promote clean energy among Republicans.

Why are Michigan Republicans such fans of wind power? Sorry to disappoint you, but the answer is not that they have accepted the science of anthropogenic climate change and the moral imperative to address it. At least, that’s not how they frame the issue in public. In fact, Snyder and his supporters never utter the words climate change if they can avoid it.

What makes Michigan Republicans different from, say, Wyoming Republicans is their state’s economics and politics. Michigan’s economy has suffered from de-industrialization, and producing wind turbines has the potential to help pick up the slack left by disappearing auto manufacturing jobs. “Renewable energy is an important piece of the economic puzzle, with Michigan’s manufacturing tradition and the sheer number of engineers we produce from state colleges and universities,” says Mark Pischea, former political director for the Michigan Republican Party. “We are very well positioned to be a major player in the clean energy manufacturing sector.”

More than half of the electricity in Michigan is generated by burning coal. Michigan doesn’t have coal. But anyone who has been there in winter knows that it has plenty of wind. Why send your money elsewhere to buy coal, when you can generate energy with the resources you do have? In a rare confluence, both the Sierra Club and the Michigan Conservative Energy Forum cite with dismay the same statistic: that Michigan spends $1.2 billion per year on out-of-state coal. And they even use it to make the same point: that Michigan should instead develop its own natural resources. As wind power keeps getting cheaper, they argue that it will both save Michiganders money and put them back to work.

But there is a catch: All the conservative advocates of cleaner energy in Michigan, from Snyder on down, are also fond of natural gas, which Michigan does have. From a more narrowly self-interested environmental perspective, natural gas is preferable to coal because it does not release soot or cause mercury pollution of the Great Lakes. If your concern is climate change, though, the methane released from fracking is such a potent greenhouse gas that natural gas may not be any better than coal. “We take an all-of-the-above approach,” says Larry Ward, executive director of the Michigan Conservative Energy Forum. “We want to do what’s right for Michigan residents.” Left out of this calculation are residents of low-lying developing nations such as Bangladesh — and low-lying states such as Florida.

Michigan’s relatively moderate politics may also be a factor in the growing popularity of renewables. It is a swing state, usually leaning Democratic, in presidential elections. Pischea argues that to compete among young voters who are concerned about the environment, the GOP must embrace clean energy. The political incentives — especially in competitive general elections — are quite different for Michigan Republicans than for Republicans in states like Oklahoma, where all they need to do is win the Republican primary.

Snyder has said he is merely laying out goals at this point, and he will work with the legislature over the next year on questions such as how much they want to ramp up natural gas versus renewables.

So there is good news from Michigan, which is that you don’t need politicians to care about climate change to back clean energy. But pay close attention to what they mean by “clean.” And there is bad news too: If a state does have coal, or oil, you’re still out of luck. Just ask environmentalists in Louisiana or West Virginia.