The following is an excerpt from The First 100, a short-run weekly newsletter analyzing federal climate action during the first months of the Biden administration.

Howdy! I’m Shannon Osaka, and today is Day 3 of the Biden administration. This week, the new president made some big, symbolic gestures — but concrete climate action could be right around the corner.

A mere five hours after he was sworn in as president of the United States, Joe Biden put pen to paper on executive orders to cancel the permits for the partially completed Keystone XL pipeline and rejoin the Paris Agreement.

These are big, sweeping decisions that rightfully got a lot of media attention — but for the moment, they’re more symbolic than substantive. While Keystone XL has been a target of climate activism for over a decade, the falling price of oil has made the pipeline much less viable economically. Many economists suspected the market was already on its way to canceling the project. 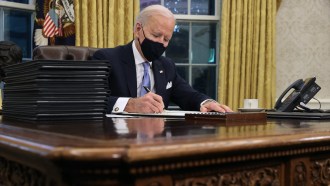 Rejoining Paris, meanwhile, is just the first, baby step toward showing other countries that the U.S. is getting serious about climate change. When December’s United Nations climate meeting in Glasgow, Scotland, comes around, the Biden administration will be expected to do much more than just show up. It will need to promise a 45 to 50 percent emissions cut by 2030, compared to 2005 levels — and more importantly, have a plan for getting such a policy through Congress.

These early gestures are a start, but the real test of the new administration’s focus on climate will come in the following weeks (and months and years).

The good news is that, in the same executive order that revoked Keystone’s permits, Biden provided a roadmap for his administration’s next big climate actions. He asked the Environmental Protection Agency to review dozens of rules finalized by the Trump administration. Those reviews don’t sound sexy, but the actions that spring from them will be crucial to actually cutting carbon emissions over the next four years. More on that below.

According to Biden’s sweeping executive order on climate, his administration plans to reassess how the federal government analyzes the “cost” of carbon pollution, review rules on methane emissions from the oil and gas sector, and look into revising fuel economy standards in cars and trucks. But it’s not going to be easy: In some cases, instituting new rules to cut pollution in the air and water could take years.

Remember the fight over Bears Ears? Biden has ordered the secretary of the Interior to review the boundaries of national monuments, including Bears Ears and Grand Staircase-Escalante in Utah. The Trump administration shrank those monuments, paving the way for oil and gas drilling on formerly protected lands.

Treasury Secretary nominee Janet Yellen announced the creation of a Treasury Department “hub” to prepare for the risks that climate change poses to the financial system.

We need to build a lot of wind turbines. Will Americans agree to live near them?