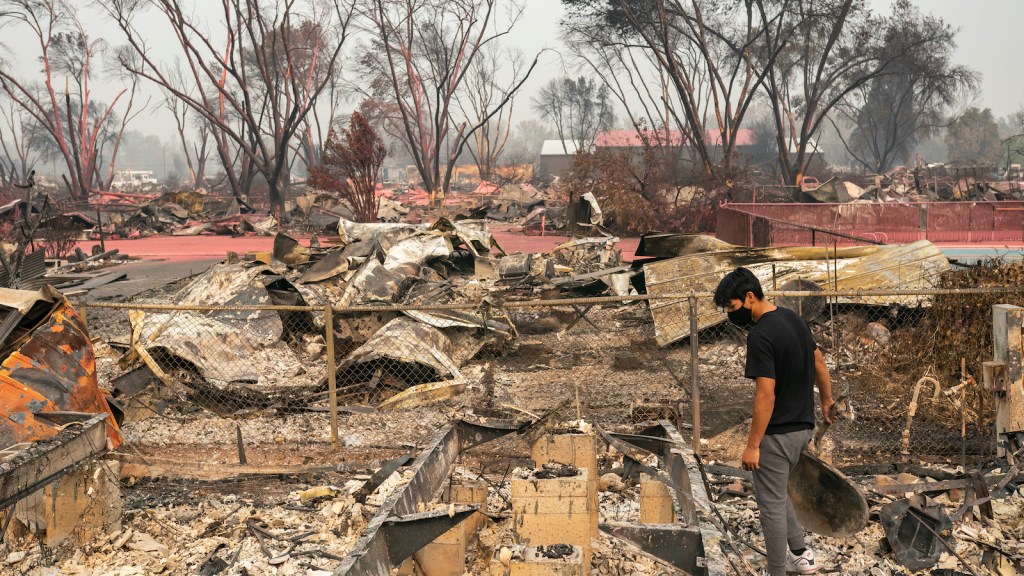 Juan Gonzalez stands amid the remains of his home, burned in the Almeda Fire. Nathan Howard / Getty Images
growing campaigns

This story was originally published by Drilled News.

In 2013, environmentalists and organic farmers in southern Oregon’s Josephine County launched a grassroots effort to ban local cultivation of genetically modified plants. They collected enough signatures to put the ban on the ballot, and fought back when Big Ag corporations like Monsanto and Syngenta shoveled money into a campaign to defeat them. In May 2014, voters passed the ban in a 58 percent to 42 percent landslide.

“It was an amazing win for the community,” recalls Vanessa Ogier, a 28-year-old Josephine County climate activist who supported the ballot measure.

But the triumph was brief: In 2015, commercial sugar beet farmers sued the county, which delayed enforcing the ban. In 2017, the Oregon Court of Appeals blocked the ban entirely, ruling that a statewide law prohibiting county-level GMO bans made it impossible to enforce.

“That radicalized me,” Ogier says. “That’s when I realized that we need climate sympathizers inside the government to get any serious work done.”

According to a December 2019 national poll by the U.S. Conference of Mayors and Zogby Strategies, 74 percent of voters ages 18-29 want state and local governments to do more about climate change, especially in the face of the Trump administration’s denial of the crisis and rollbacks of Obama-era climate policies. For the past few years, tens of thousands of young people have been turning out at marches, sit-ins, and demonstrations to demand that elected officials take climate action.

In 2020, many young people have decided to bring the youth climate movement indoors as well. Across the country, they’re running to replace the sorts of local lawmakers who have long downplayed, denied, or ignored their demands on a host of progressive reforms, including climate action.

They include a 27-year-old accountant and nonprofit volunteer named Nicole Hamm, who is running for a seat on the Jacksonville City Council in Florida, as well as Rayonte Bell, a 22-year-old community activist on the ballot in Michigan for the Berrien County Board of Commissioners. In southern Oregon, Ogier hopes to become the youngest person on the city council of Grants Pass, the county seat of Josephine County.

Campaigning on climate change in conservative-leaning towns and counties might not seem like the best way to get elected. But each of these candidates believes that voters are ready for local action on climate-aligned issues like resilient infrastructure, clean drinking water, and environmental justice.

The effects of climate change are obvious in Grants Pass. In September, the Almeda Fire, which started just 30 miles south of the city, killed three people and burned nearly 3,000 homes in a region already grappling with an affordable housing shortage.

Ogier fears this is only a taste of what’s to come if the city council doesn’t start to take decisive climate action. “We will continue to be plagued by droughts, wildfires and smoke, a lack of snowpack in our mountains, and warming rivers,” she says. “We need to recognize these trends and adapt to them.”

Josephine County is a Republican stronghold where twice as many voters cast ballots for Trump as for Clinton in 2016. “Climate is not even a conversation” on the Grants Pass City Council, says Ogier. But she is campaigning nonetheless on measures to help residents adapt to the region’s increasingly hotter summers and more destructive wildfires. Ogier advocates expanding sustainable housing, developing an “energy action plan” that would reduce the city’s carbon emissions, and building a system of shelters to protect people without housing from extreme temperatures.

Across the country in Jacksonville, Florida, Hamm shares Ogier’s hope of flipping a seat in a Republican stronghold. Her district has not elected a Democrat to the city council since 2003. But voters have been responsive to her ideas for climate action, she says, which include developing urban green spaces, protecting local waterways from pollution, and investing in resilient infrastructure to defend local homes and businesses from flooding caused by rising sea levels.

“It’s different when people start to see [climate change] affecting their pockets and their well-being,” Hamm says. “They can’t avoid it anymore.”

Hamm also wants to tackle environmental racism in Jacksonville’s northwest quadrant, where communities of color have long lived with failing septic tanks that pollute their local drinking water supply. “When you drive over the bridge there, you can smell the water and sewage,” she says.

So Hamm is also calling for restoring overgrown and inoperable storm drains as part of her overall plan to create climate-resilient infrastructure.

Similar issues and disparities are present in the Berrien County, Michigan, area where Bell is running for a seat on the board of commissioners. The county sits on the southeastern shore of Lake Michigan, where the mean water level in July 2019 measured 6 feet higher than it did just six years earlier — a result of years of warmer temperatures leading to wetter-than-normal conditions, both likely due to climate change. The rising lake levels have created new flooding risks for local homes and businesses.

County residents have also long contended with poor air and water quality, aggravated by decades of poor regulation of southwestern Michigan’s manufacturing industries. A 2017 report from the state’s Department of Environmental Quality revealed that several cities in the county had drinking water lead levels that were the same or higher than those in Flint, Michigan.

“Using environmentally safe practices is the best approach” to solving these problems, says Bell, “rather than trying to put a Band-Aid on them. We need to think long term.”

The city with the worst water quality at the time of the report was Benton Harbor, a majority-Black community located just a couple of miles north of where Bell is campaigning in St. Joseph.

“We need to acknowledge and address that inequity,” Bell says. “If we don’t, Black people are going to continue to be the most vulnerable to climate change.”

Although conservative white men have historically dominated the commission, Bell says voters are responding positively to his climate action platform. “When I talk to community members, they’re like, ‘yeah, we’d love to see the erosion stop, and our water quality better,’” he says.

Bell acknowledges that voters also tell him they’re concerned about the costs, but “I think, for the most part, we’re working toward the same goals. And I think that’s what matters most.”

Ogier, Hamm, and Bell are all in challenging races. But each is hopeful that voters will set aside partisan politics at the ballot box this November and unite behind climate action.

As the local and regional impacts become impossible to ignore, Bell says, “people want to see someone” in local office “fighting on their behalf against climate change.”