Massachusetts has a bunch of new roadside solar panels. Too bad they're so ugly 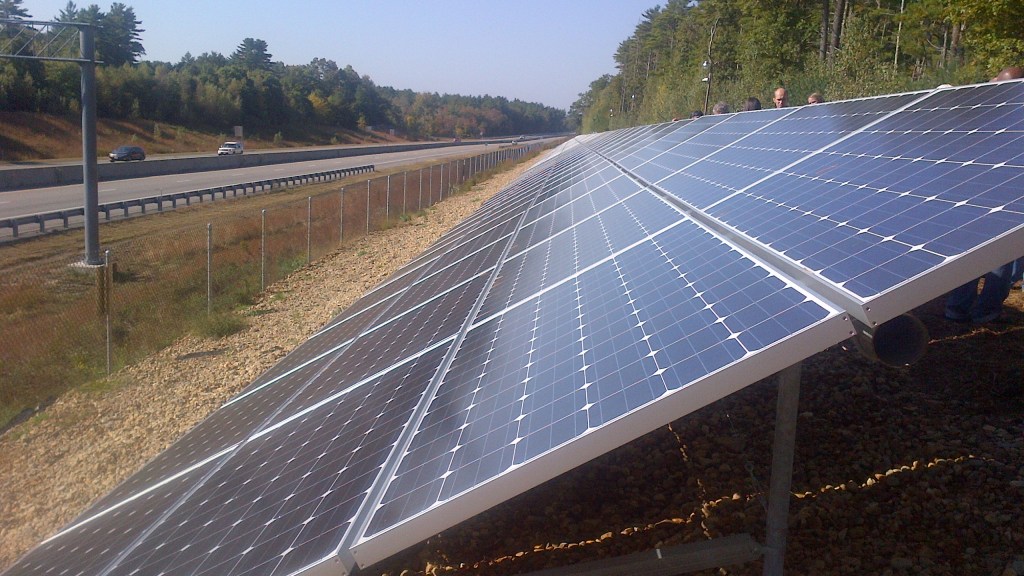 Massachusetts has a bunch of new roadside solar panels. Too bad they’re so ugly

Last month, my family and I were on a pleasant drive through Massachusetts, when suddenly we came upon a huge swath of solar panels on the side of the road. “Cool!” I thought, internally fist-pumping the recent success of solar power. When we came upon a second array, my reaction was a bit more subdued: “Huh — I didn’t expect to see another one so soon.” And by the third array, I had turned full-on curmudgeon: “Geez — those things are so ugly; they’re totally ruining the view!”

For background, Massachusetts wants to power 240,000 Massachusetts homes with solar power by 2020. According to The Boston Globe, the state could produce only three megawatts of solar power back in 2008, but has since bumped that number way up to 903 — enough to power 137,500 homes. The roadside panels are a relatively new addition to the state’s solar arsenal. Here’s more from The Boston Globe:

The highway solar farms are part of an initiative launched two years ago by the state Department of Transportation that will build at least 10 solar projects on unused department property, eight of them along the Mass Pike. The remaining solar farms will be built next year near Stockbridge and in Salisbury off of Interstate 95.

Ameresco Inc. in Framingham, a publicly traded energy management and procurement company, is developing the solar projects under a contract that pays the DOT nearly $100,000 a year in land leases and allows it to buy electricity at reduced rates from Ameresco. The lower power costs could save the state $15 million over 20 years.

Driving past those new arrays, I couldn’t help but feel conflicted. On the one hand, I’ve been a firm supporter of renewable energy ever since I wrote my first ever research paper on the stuff back in middle school (and oh boy — what I wouldn’t give to read that essay today; anyone got a floppy disk reader?). On the other hand, solar panels are ugly.

Of course, ugly solar panels are better than none, so for now, yay for more solar panels! But going forward, clean energy supporters shouldn’t just sit down and shut up and give thanks to the powers that be for every giant dark rectangle on the side of their road trip. If we expect other technologies like cars, phones, and computers to look sleek and appealing, why not our energy infrastructure, too?

Fortunately, people are already working on more aesthetically pleasing panels. Scientists at a company called Ubiquitous Energy have figured out a way to make completely transparent solar panels that could be mounted on electronics or buildings. And one of the company’s co-founders, Richard Lunt, has since designed a type of transparent material that can redirect certain wavelengths of light to unobtrusive photovoltaic cells mounted on the edge of said material (good for, say, a smartphone screen). There’s also a group of Dutch researchers working on colorful — although low-efficiency — solar panels that they hope to test out on some roadsides of their own.

Hopefully, we’ll soon be looking back on these massive arrays the same way we look back on those clunky desktop computers of the ’80s and ’90s. I, for one, can’t wait to see what the 2015 Macbook version of solar panels will look like.