The rewards of being right about climate change are bittersweet. James Hansen should know this better than most — he warned of this whole thing before Congress in 1988, when he was director of NASA’s Institute for Space Studies. At the time, the world was experiencing its warmest five-month run since we started recording temperatures 130 years earlier. Hansen said, “It is time to stop waffling so much and say that the evidence is pretty strong that the greenhouse effect is here.”

Fast forward 28 years and, while we’re hardly out of the Waffle House yet, we know much more about climate change science. Hansen is still worried that the rest of us aren’t worried enough.

Last summer, prior to countries’ United Nations negotiations in Paris, Hansen and 16 collaborators authored a draft paper that suggested we could see at least 10 feet of sea-level rise in as few as 50 years. If that sounds alarming to you, it is — 10 feet of sea-level rise is more than enough to effectively kick us out of even the most well-endowed coastal cities. Stitching together archaeological evidence of past climate change, current observations, and future-telling climate models, the authors suggested that even a small amount of global warming can rack up enormous consequences — and quickly.

However the paper, publicized before it had been through peer review, elicited a mix of shock and skepticism, with some journalists calling the news a “bombshell” but a number of scientists urging deeper consideration.

Now, the final version of the paper has been published in the journal Atmospheric Chemistry and Physics. It’s been reviewed and lightly edited, but its conclusions are still shocking — and still contentious.

So what’s the deal? The authors highlight several of threats they believe we’ll face this century, including many feet of sea-level rise, a halting of major ocean circulatory currents, and an outbreak of super storms. These are the big threats we’ve been afraid of — and Hansen et al. say they could be here before we know it — well before the Intergovernmental Panel on Climate Change’s sanctioned climate models predict.

Here we help you understand their new paper: 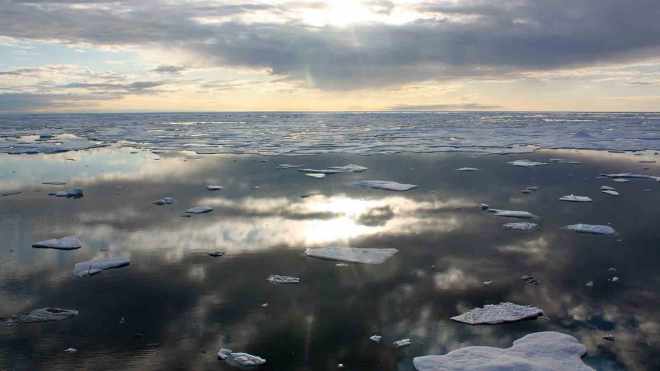 The scientists estimate that existing climate models aren’t accounting well enough for current ice loss off of the Antarctic and Greenland ice sheets. Right now, Antarctica and Greenland ice sheets both contribute under or near 1 millimeter to sea-level rise every year; they each contain enough stored ice to drive up ocean levels by 20 and 200 feet, respectively.

This study suggests that, since the rate of ice loss is increasing, we should think of it not as a straight line but as an exponential curve, doubling every few years. But how much time it takes to double makes a big difference. Right now, measurements of ice loss aren’t clear enough to even make a strong estimate about how long that period might be. Is it 10 years or is it 40? It’s hard to say based on the limited data we have now, which would make a big difference either way.

But then again, we don’t even know that ice loss is exponential. Ian Joughin — a University of Washington researcher unaffiliated with the paper and who has studied the tipping points of Antarctic glaciers — put it this way: Think about the stock market in the ’80s. If you observed a couple years of accelerating growth, and decided that rate would double every 4 years — you’d have something like 56,000 points in the Dow Jones Industrial by now.

Or if stocks aren’t your thing, think about that other exponentially expanding force of nature: bacteria. Certain colonies of bacteria can double their population in a matter of hours. Can they do this forever? No, or else we’d be nothing but bacteria right now (and while we’re certainly a high percentage of bacteria, there’s still room for a couple other things).

Nature tends to put limits on exponential growth, Joughin points out — and the same probably goes for ice loss: “There’s only so fast you can move ice out of an ice sheet,” Joughin explained. While some ice masses may be collapsing at an accelerating rate, others won’t be as volatile.

This means, while some parts of ice sheet collapse may very well proceed exponentially, we can’t expect such simple mathematics to model anything in the real world except the terror spike of the Kingda Ka. 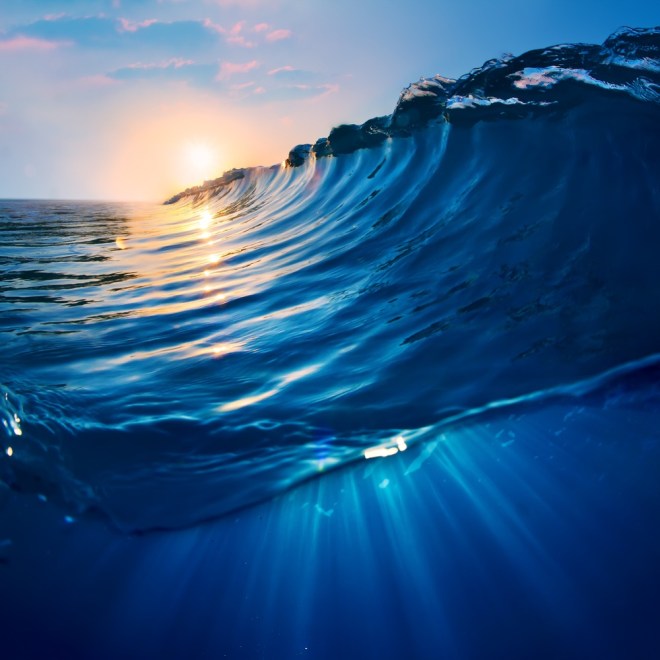 Mmm mm, ocean turnover: Is it another word for a sushi roll or a fundamental process that keeps the climate relatively stable and moderate?

That’s right — we’re talking the Atlantic Meridonal Overturning Circulation, or AMOC, and other currents like it.

As cold meltwater flows off of glaciers and ice sheets at enormous rates, it pools at the ocean’s surface, trapping the denser but warmer saltwater beneath it. This can seriously mess with the moving parts of the ocean, the so-called “conveyor belts” that cycle deep nutrient-rich water to the surface. These slow currents are driven by large-scale climate processes, like wind, and drive others, like the carbon cycle. But they also rely on gradients in temperature and density to run; if too much cold water from the glaciers pools at the surface, the whole conveyor belt could stutter to a stop.

In the North Atlantic, this would mean waters get colder, while the tropics, denied their influx of colder water, would heat up precipitously. Hansen says we’re already seeing the beginnings of AMOC’s slowdown: There’s a spot of unusually cool water hanging out off of Greenland, while the U.S. East Coast continues to see warmer and warmer temperatures. Hansen said it plainly in a call with reporters: “I think this is the beginning of substantial slowdown of the AMOC.” 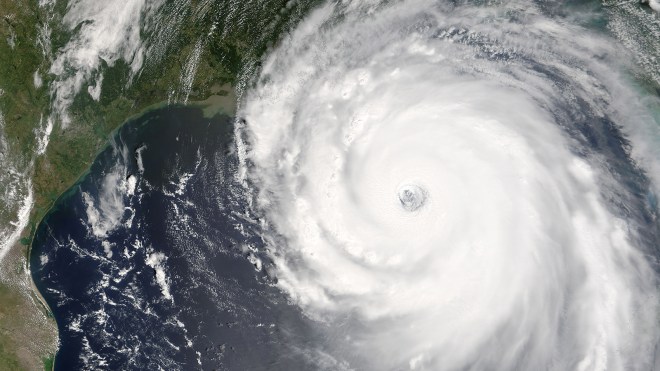 Pointing to giant hunks of rock that litter the shore of the Bahamas, among other evidence of ancient climates, the study’s authors suggest that past versions of Earth may have featured superstorms capable of casually tossing boulders like bored Olympians.

And as the temperature gradient between the tropic and the polar oceans gets steeper, thanks to that slowing of ocean-mixing currents, we could see stronger storms, too.

This is surprisingly intuitive: Picture a temperature gradient like a hill, with the high temperatures up at the top and the low temperatures down at the bottom. As the highs get higher and the lows get lower, that hill gets a lot steeper — and the storms are the bowling balls you chuck down the hill. A bowling ball will pick up a lot more speed on a steep hill, and hurt a lot more when it finally runs into something. Likewise, by the time these supercharged storms are slamming into coasts in the middle latitudes, they will be carrying a whole lot of deadly force with them.

So what does it all mean?

Whether other scientists quibble over these results or not — and they probably will — the overall message is hardly new. It’s bad, you guys. It might be really, truly, deeply bad, or it might be slightly less bad. Either way, says Hansen, what we know for sure is that it’s time to do something about it. “Among the top experts, there’s a pretty strong agreement that we’ve reached a point where this is truly urgent,” he said.

So Hansen is frustrated once more with the failure of humanity to respond adequately. The result he’d hoped for when he released an early version of the paper online last summer was to get world leaders to come together in Paris to agree on a global price on carbon. As he told Grist’s Ben Adler at the time, “It’s going to happen.” (It didn’t happen, but some other stuff did.)

Still, true urgency would require more of us than just slowing the growth of emissions — it requires stopping them altogether. In a paper published in 2013, Hansen found that we have to cut 6 percent of our use of carbon-based fuels every year, if we want to avoid dangerous climate change.

Carbon prices and emissions cuts are more the purview of politicians and diplomats, but if anything, Hansen has shown he is unafraid to stray beyond the established protocol of academic science.

“I think scientists, who are trained to be objective, have something to offer by analyzing the problem all the way to the changes that are needed in order to address it,” he said on a press call. “That 6 percent reduction — that’s not advocacy, that’s science. And then I would advocate that we do that!”

And to pre-empt the haters, Hansen wants you to remember one thing. “Skepticism is the life blood of science. You can be sure that some scientists will find some aspects in our long paper that they will think of differently,” he said. “And that’s normal.”

So while scientists continue their debate over whether the ice sheets are poised to collapse in the next 50 years or the next 500, the prognosis is the same: The future is wetter, stranger, stormier unless we make serious moves to alternative energy sources now. Will we? Maybe. We’ve started but we still have a long, long way to go. If it’s a race between us and the ice sheets, neither I nor James Hansen nor anyone else can tell you for sure who will win.

Hey, no one said telling the future was easy.