On an early October morning in 1997, on the west side of the island of Kauai, 18-year-old Mike Coots got in the water with his bodyboard, as he had done hundreds of times before, and started to paddle out. He and his friends went about 300 feet from the shore until they reached the surf break, in water that was 30 to 40 feet deep. They were quickly rewarded by a set of good waves, each about four feet high. Everyone in the group caught one right away. Except for Coots.

It was just Coots and one other surfer still waiting when the last wave of the set came in. “I remember looking at him and we looked at each other wondering who’s going to catch the wave,” Coots recounts. “[A]nd I got on my board and started paddling.” And then, without warning, a tiger shark emerged from the depths and latched on to his leg.

The animal thrashed back and forth with his leg in its mouth. It finally let go when he punched it in the nose. Coots got on his board and began to paddle like mad back to the shore. When he felt his leg spasm, he feared the shark had taken hold of him again; it wasn’t until he looked back that he realized his leg was, in fact, gone. In its place, a raw laceration spurted out blood with every pump of his heart.

We’ve had plenty of reasons to get scared about sharks. From the recent “summer of the shark” attacks in North Carolina to Discovery Channel’s Shark Week to this nightmare, close encounters with the infamous marine predators seem to be cropping up left and right lately.

In the midst of the media mania, scientists continue to try to reassure the public that the odds of being a shark attack victim are in fact incredibly small. You are orders of magnitude more likely to suffer a drowning incident, get killed on your bicycle, or meet your end in a collapsing sand hole than in the jaws of a shark.

Yet sharks continue to be one of our favorite things to feel horrified by. Those furtive fins gliding above the water! Those huge, lithe, cartilaginous bodies! And let’s not forget — though how could we? — those rows upon rows of teeth.

Before his attack, however, Coots spent little time thinking about sharks. “I never really had any fear of them, even though I’ve been around them my whole life,” he tells me. “It was just a thing that’s in the ocean that you’ve got to respect and be careful of, but all in all they just do their own thing.”

But after the incident, Coots did fall into to a certain shark obsession — though not the way you might expect. The Hawaii-based surfer and photographer turned his experience into a call to action. Except that, rather than fixate on the harm sharks present to us, Coots is more concerned with what we’re doing to them.

Talking to Coots, now 35, is like taking in a breath of Hawaii — a place that’s hard to talk about without getting at least a little cheesy. He conveys his usual greeting, Aloha, with an unironic chilled-out warmth that infuses everything he does. Even when recounting something as traumatic as losing a limb, Coots maintains a levelheaded outlook, an understanding that sometimes things just happen. 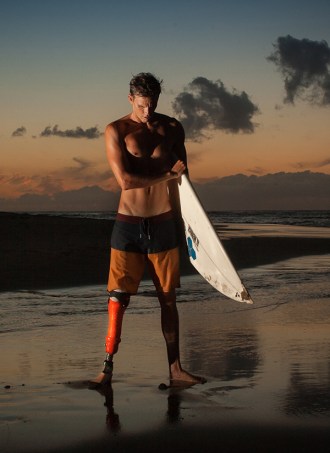 This lesson is reinforced when you live your life out in the natural world. Before he was attacked, “I had spent my whole life in the ocean,” Coots says. He got in the waves every single day, harboring dreams of becoming a pro-bodyboarder: “At that time of my life, bodyboarding was all I knew,” he says.

In the aftermath of the attack, he says the hardest thing to cope with wasn’t the pain or even coming to terms with the fact that he was now missing a leg — it was not being able to get back in the water until the risk of infection had passed.

To add to his frustration, he was attacked at the very start of the surf season, after which the waves kept getting better and better. “I’d hear stories from my friends of how good the surf was … that’s what was hardest.”

But while he was recovering, he found a new hobby that could keep him close to the water. “I started shooting photos of my friends while they were surfing,” he says. “And it sort of transitioned into this love affair … if the shark attack hadn’t happened, I probably wouldn’t be a photographer right now.”

Once the staples that held his wound together were taken out — only a month after the shark bit off his leg — Coots crutched down to the shore just a couple hundred yards away from where he was attacked and got back in the ocean. “If you live your life in fear, I think you’d be pretty bored here in Hawaii,” says Coots. “All we’ve got is water all around us.”

Coots didn’t really turn his attention back to sharks until about a decade after his attack, when he got a phone call from one of the very few other people who could relate to what he had gone through. Debbie Salamone is a fellow shark-attack survivor who now works for the Pew Environment Group, at the head of a group called — very accurately — Shark Attack Survivors for Shark Conservation. Salamone had been tracking down other shark survivors, which, thanks to our obsession with the bloody encounters, turns out not to be much harder than a Google search.

As they talked, Salamone introduced Coots to the impacts we humans are having on sharks. She told him that shark populations are at an all time low, that people kill an estimated 100 million sharks every year, that an estimated 25 percent of shark species are threatened with extinction. Coots learned about the biggest threat to them: shark finning, a practice in which a shark’s dorsal fin is cut off and the animal is thrown back into the sea, where it either bleeds to death or, unable to swim, drowns. The fin is usually sold in Asian markets to make shark fin soup; demand for the delicacy is responsible for about 70 million dead sharks each year.

He also learned that millions of sharks are unintentionally killed every year, tangled in nets or hooked on longline as bycatch. Like us, sharks take years to reach reproductive age and, once they do, give birth to relatively few pups, so such population losses can be devastating.

“I was just baffled,” Coots says. He began to stay up late into the night surfing the web to read research papers, track shark movements, and listen to speeches by shark scientists. “The more you learn, the more you want to learn,” Coots says. “I was appalled by what’s going on in our seas.”

Salamone didn’t have a hard time getting other survivors to join her cause. People were “jumping at the opportunity to do something good,” she tells me. “I think that’s part of the emotional healing for a lot of people. You don’t want all the suffering to be for nothing. You want something good to come out of it.”

When Salamone was recovering from her own shark attack (a bite in the Achilles tendon, probably from a black tip or spinner shark in Florida) she had a hard time appreciating the enthusiasm for sharks she saw in others. “But I always loved the ocean — and whatever it took to help save and conserve the ocean is something that interested me,” she says. “In order to love the ocean you have to embrace everything in the ocean — even its darkest side.”

“I think learning about sharks has helped me forgive them,” Salamone recalls. “So I said, ‘Wow, here I am, a shark attack survivor. Who better to speak up for the sharks?’”

In 2009, the advocacy group of fourteen survivors met at the U.S. Capitol. It was likely the first sizable gathering of shark attack survivors ever. “We had this incredible bond, all of us,” Salamone recalls. “We exchanged all these horror stories of loss of blood and time in a hospital and rehab. But we not only shared these traumatic experiences, but this newfound passion that we could all pull together and make something positive out of things that had happened that were really bad.”

They lobbied for the Shark Conservation Act, which would close loopholes in the nation’s shark finning ban. At the time, it was illegal to carry bodiless shark fins in U.S. waters (though it was not illegal to carry whole sharks), but the law only applied to boats with fishing gear. That meant that non-fishing boats could collect fins that were illegally cut off from sharks on other boats, and legally bring them back to port. When President Obama signed the Shark Conservation Act into effect in 2011, it was a big win for the shark conservation group.

The group is still working to advocate for sustainable shark fishing, marine sanctuaries in which commercial shark fishing is banned, and a more positive, less fearful attitude towards sharks around the world.

Losing a leg is, obviously, life-changing. But Coots seems to take the fact that a shark inflicted the injury in measured stride. “It’s kind of cool in a way that I lost my leg to a shark,” Coots said in an interview with GrindTV. “It wasn’t like a drunk-driver car accident or something. You go into the ocean, things happen. It’s a good story to tell, and I’m able to use it to make a difference now in the ocean environment.”

Three years after he was attacked, Coots and a friend were hanging out when they hatched a wild, spur-of-the-moment plan. They picked up some pig meat from another friend who hunts them (apparently, wild pigs are everywhere in Hawaii). They loaded up a Jet Ski, Coots grabbed his camera, and they headed two miles into the open ocean. After throwing the meat overboard, they sat back and sipped coffee while they waited.

About 45 minutes later, they had successfully lured in a tiger shark: Coots’ first encounter with a shark since the one that took his leg. “It was just us in the middle of the ocean on a Jet Ski, watching this huge tiger shark feast,” Coots remembers. As he photographed the animal, “I was just totally in awe about how beautiful this creature was. The way the light played off his back, the way it swam around,” he trailed off.

“It’s still, to this day, one of the coolest things that I have ever seen.”

This scuba diver wants everyone — black, white, or brown — to feel at home in the ocean