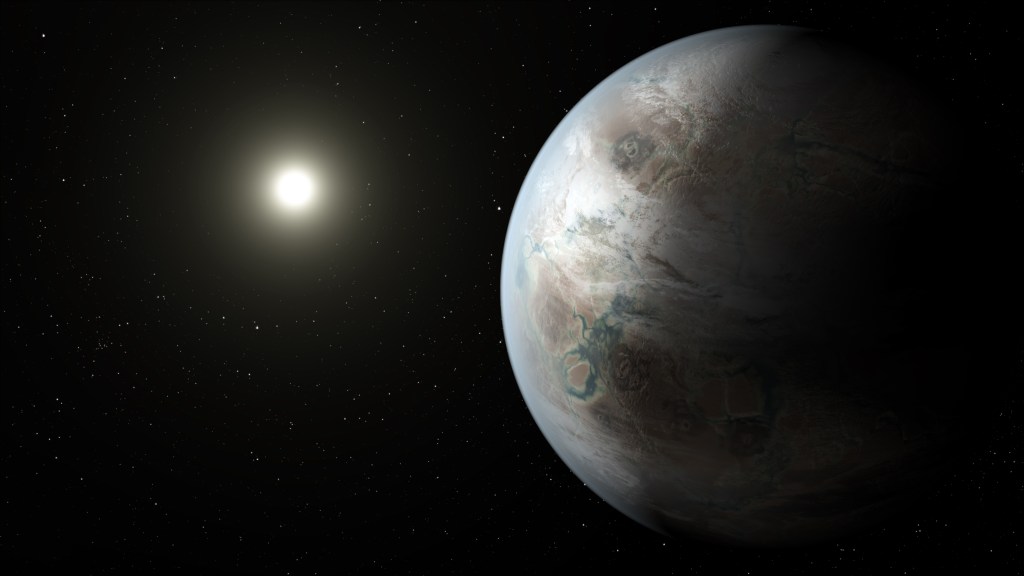 It’s been a good week for alien hunters. First, the Russian billionaire Yuri Milner pledged $100 million to SETI, the real-world search for extraterrestrial intelligence that inspired the movie Contact. And today, NASA announced that its Kepler Mission — which searches for Earth-like planets — has found its most Earth-like planet yet. Here’s more on that news from a NASA press release:

The newly discovered Kepler-452b is the smallest planet to date discovered orbiting in the habitable zone — the area around a star where liquid water could pool on the surface of an orbiting planet — of a G2-type star, like our sun. The confirmation of Kepler-452b brings the total number of confirmed planets to 1,030. …

“We can think of Kepler-452b as an older, bigger cousin to Earth, providing an opportunity to understand and reflect upon Earth’s evolving environment,” said Jon Jenkins, Kepler data analysis lead at NASA’s Ames Research Center in Moffett Field, California, who led the team that discovered Kepler-452b. “It’s awe-inspiring to consider that this planet has spent 6 billion years in the habitable zone of its star; longer than Earth. That’s substantial opportunity for life to arise, should all the necessary ingredients and conditions for life exist on this planet.”

Unfortunately, scientists can’t really confirm whether or not those conditions exist. They’d first need to know how massive the planet is before they can even say whether the planet is “rocky” (like Earth) or gaseous (like Neptune). Jenkins told The New York Times that there was between a 50 and 62 percent chance that the planet was rocky, which would be awesome … but also make 452b look less like a cool older cousin and more like a horrifying glimpse into Earth’s inevitable future. Here’s why, from a SETI press release:

“If Kepler 452b is indeed a rocky planet, its location vis a vis its star could mean that it is just entering a runaway greenhouse phase of its climate history,” says Doug Caldwell, a SETI Institute scientist working on the Kepler mission.  “The increasing energy from its aging sun might be heating the surface and evaporating any oceans.  The water vapor would be lost from the planet forever.”

“Kepler 452b could be experiencing now what the Earth will undergo more than a billion years from now, as the Sun ages and grows brighter.”

Please, take a moment for your existential crisis.

Now, all of this exciting news doesn’t mean that we’re about to find [fill in your favorite movie alien here]. And besides, even if and when we do find extraterrestrial life, it will most likely be in the form of little microbes that are decidedly not intelligent … or are they? (Seriously, though, they’re not).

But as long as we’re all so eager to meet the neighbors, let’s play this out. Say — just for fun — we find sentient life out there: First, we’ll get all excited, hoping that the newcomers are super chill and will want to hang out all the time. Then, when we eventually go over to introduce ourselves, we’ll just cross our fingers and pray that they’re not dicks. Finally, after deciding that they’re in fact not dicks, we’ll invite them over for dinner and then immediately look around our apartment — er, planet — in horror as we realize how disgusting it is.

That’s obviously not going to happen, but just in case — if not for ourselves, then for our hypothetical neighbors: Let’s clean this place up a bit, shall we? It is, after all, objectively the coolest planet that we know about (yet).