The environmental injustice of the Arctic refuge 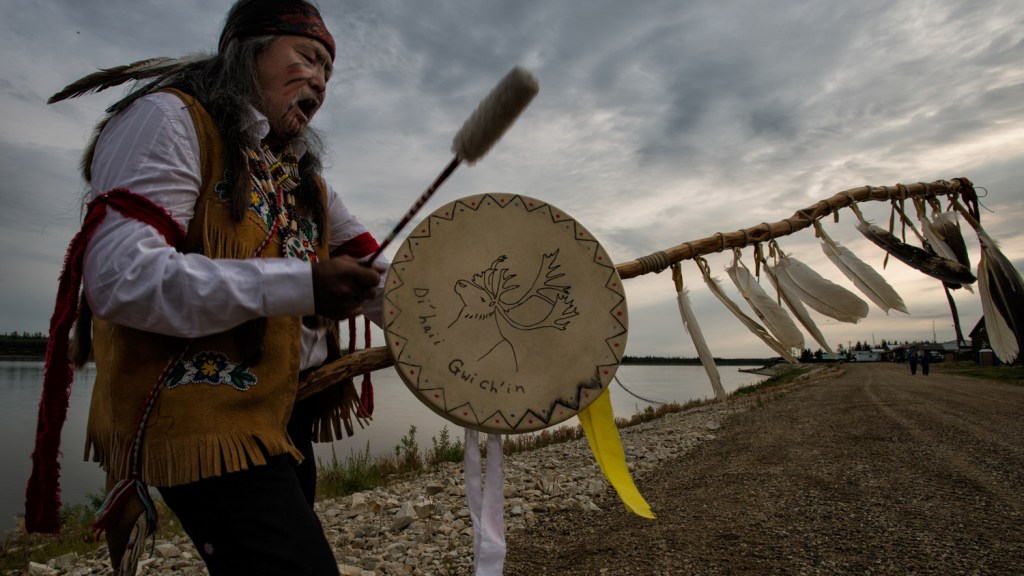 The environmental injustice of the Arctic refuge

Get your daily dose of good news from Grist Subscribe to The Beacon
This article is sponsored by:

300 miles south of the Arctic National Wildlife Refuge coastline is Arctic Village, a remote town that lives up to the color of its name. If you find yourself here in Arctic Village, the people surrounding you are the indigenous Gwich’in. “Gwich’in” translates to “the Caribou People.” They have been here with the caribou for thousands of years.

Newer residents of the Arctic Refuge aren’t Gwich’in at all, though. They go by names you’re more likely to associate with kerosene than caribou; names that are hungry for something else. Look: A caribou pokes his hoof at the snow, scratching around for lichen. These other residents dig for something deeper — something black and slick. They scratch at the earth, and in doing so, they scratch at the caribou.

Oil and gas extraction is a fact of the current global economy — for the climate-conscious, a deplorable fact, but a fact nonetheless. So if this post is just another story of Potential Oil Spill Threatens Wildlife, then why not just sign the petition and move on? Yeah, yeah: The land should be protected. Yeah, yeah: We care about the caribou.

And maybe you do. But frankly, it’s hard to really care about the caribou if you don’t subsist on them — if your life isn’t intertwined with their well-being to the extent that the region’s indigenous peoples’ are with the Porcupine Caribou Herd of the Arctic Refuge. For the Gwich’in, the coastal plain where the Porcupine Herd calves is “the sacred place where life begins.”

The so-what here isn’t just about conservation. It’s about justice.

Environmental justice would see the effects of an extractive economy distributed equitably. It would ensure the drilling sites and the smokestacks of our economic engine aren’t always in the backyards of the same people. Too often, they are.

Environmental injustice infiltrates. It is nonconsensual. Often it hides in plain sight. Here in the Lower 48, you need look no further than the familiar headline buzzwords: the Flints, the Standing Rocks, the Bears Ears, the countless other stories of ooze and emissions imposed on populations who already bear more than enough weight. You don’t need to go as far north as the Arctic, but the injustice is there, too.

Look again at Standing Rock. The proposed Dakota Access pipeline isn’t unjust simply because it stands to poison a water supply. It’s unjust because a white neighboring population already rejected the plan on the same grounds, and the default reroute led the pipeline through Native land instead. It’s unjust because a default reroute shouldn’t be allowed to violate a treaty between sovereign nations for the sake of industrial expediency.

The injustice of the Arctic coastal plain, then, isn’t only found in the potential loss of the caribou and the subsequent disturbances in their ecological web. No, the injustice here is of the same old colonial tack: A Native population is saying no, but their protest is silenced by richer, more powerful voices.

There’s an urgency here that will never be captured by a fragile caribou population, and it stems from the fact that the United States elected a president of the Drill Baby Drill variety. A plan to put America First will never put Native America first. A dismantled EPA and a propped up fossil-fuel sector will not serve justice where justice is due.

At stake is more than vistas and roaming beasts. Environmental injustice is a story of equity and rights — about the principles this country professes to hold dear. In a time of division and uncertainty, the Arctic refuge is a battleground for the values slipping through our fingers. We ought to grasp at what we can.

The Arctic Refuge is the ultimate environmental battle — severely vulnerable to climate change, marginalized indigenous communities and a stunning web of wildlife all in the crosshairs of the oil and gas industry. Americans have defended this unique refuge for decades. But, again, all could be lost if Congress includes Arctic drilling in their 2018 budget. Please call your senators before it’s too late. Tell them to remove the Arctic Refuge from the budget!