Listen: What Wakanda can teach us about climate change 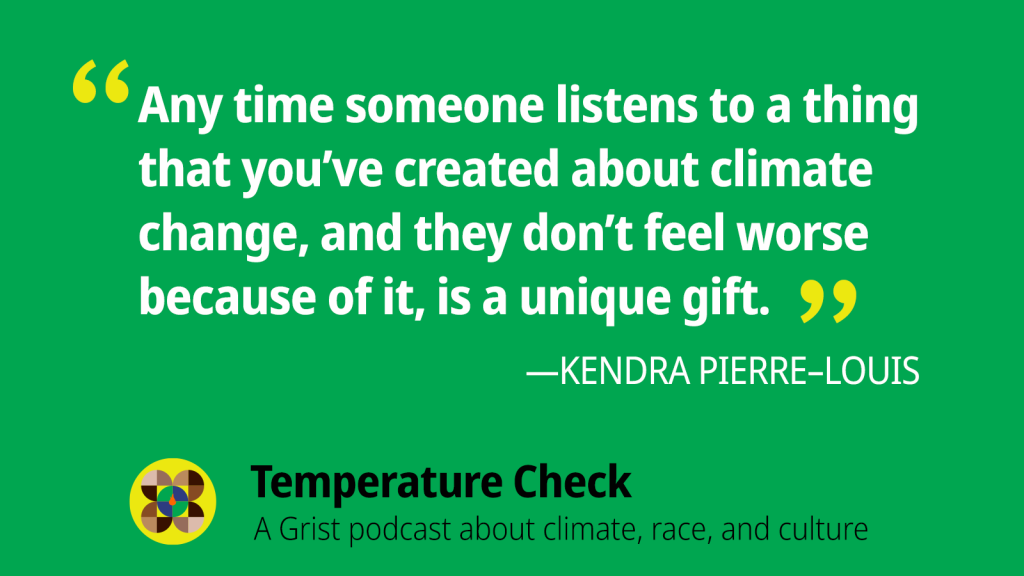 Listen: What Wakanda can teach us about climate change

Have you ever wondered what Wakanda, a fictional African country from the movie Black Panther, has to do with climate change? You can find out in the first episode of Temperature Check, Grist’s new weekly podcast on climate, race, and culture. Host Andrew Simon is joined by co-host Brady Piñero Walkinshaw as he opens the show with a conversation on what it means to bring more voices into the climate story, and how cultural shifts can lead us toward a greener and more just world.

Later in the episode, Simon will speak with guest Kendra Pierre-Louis on everything from her recent essay on Wakanda, suburbs and cities, journalism through a solutions lens, and, maybe somewhat controversially, The Day After Tomorrow as one of the most effective pieces of climate propaganda. (Hey, she said it, not us!)

Co-host Brady Piñero Walkinshaw is the CEO of Grist, a nonprofit environmental news organization reaching 2 million people a month. Formerly a Washington State lawmaker, Program Officer at the Bill and Melinda Gates Foundation, and Fulbright Scholar, Brady is a passionate advocate for a better, more just future that works for all of us.

Guest Kendra Pierre-Louis is a senior reporter with Gimlet Media. She was previously a climate reporter with The New York Times and Popular Science (PopSci). She is also the author of the book, Green Washed: Why We Can’t Buy Our Way to a Green Planet. As a climate reporter, Kendra focuses on the impacts of a warming world on people. Pierre-Louis has an S.M (M.S) in Science Writing from the Massachusetts Institute of Technology, an M.A. in Sustainable Development with a focus on Policy Analysis and Advocacy from the SIT Graduate Institute, and a B.A. in Economics from Cornell University. When she’s not achieving dramatic feats like living in France without eating butter, Kendra can often be found on Twitter railing against mayo.

You can listen to the first episode of Temperature Check on Grist, and subscribe to the podcast on Apple, Spotify, or wherever you get your podcasts. New episodes will drop weekly.

Kendra Pierre-Louis, “‘Wakanda Doesn’t Have Suburbs’: How Movies Like Black Panther Could Help Us Save the Planet,” Time, September 21, 2020.