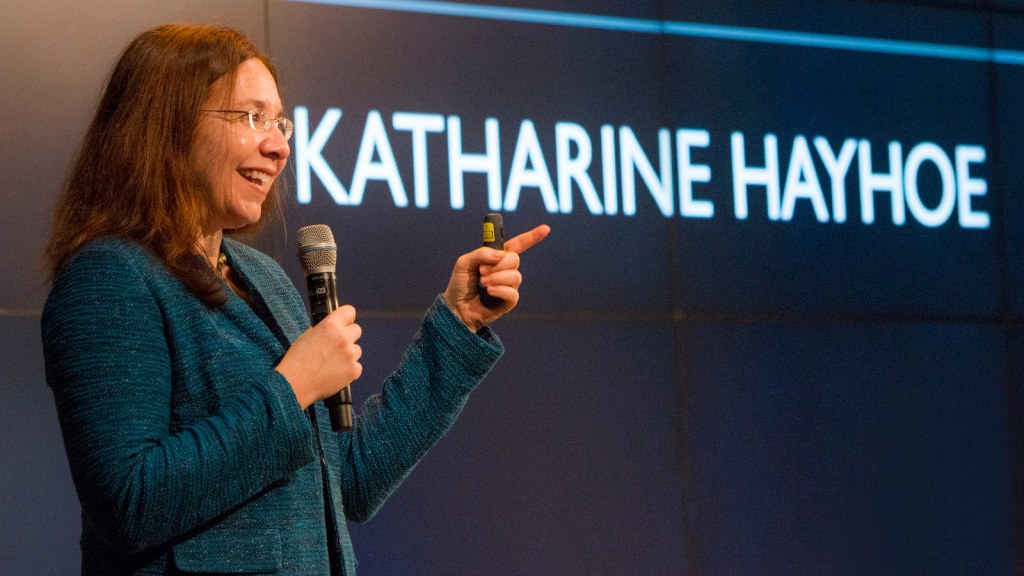 The 1,656-page National Climate Assessment can feel overwhelming if not broken up into actionable-sized pieces — not unlike climate change itself. Thankfully, report coauthor Katharine Hayhoe offered up some key takeaways in a webinar with the nonprofit news organization Climate Central on Monday. Hayhoe, an atmospheric scientist and political science professor at Texas Tech University, focused her presentation on a core message: Climate change is impacting everyone now.

“The myth that the science isn’t real, or that it’s something up for debate, is not the most dangerous myth that the largest number of people have bought into,” Hayhoe said. “There’s a belief that is just as pernicious: that global warming does not matter to me.”

To change this mindset, Hayhoe recommended shifting the narrative away from polar bears in the melting Arctic to how climate change is shaping people’s lives today, from wildfires in California to severe flooding in New York.

The new report offers the most up-to-date assessment of how climate change is affecting the United States. As Hayhoe said, it tackles “the myth that climate change is happening to people far away.” Three of her takeaways:

1. “There are already climate refugees in the United States.”

Louisiana’s Isle de Jean Charles, home to members of the Biloxi-Chitimacha-Choctaw tribe, has been swallowed by rising tides. In 1955 the island was 22,000 acres; today it’s only 320. Last year, state officials announced that the tribal nation would be evacuated to higher grounds.

However, many other indigenous communities face significant barriers to receiving relocation funding, as the report details. Slow-onset disasters like coastal erosion and melting permafrost deeply effect communities over time, but they often don’t qualify for relocation funding. The report highlights the need for more community-driven relocation plans.

2. “Hurricanes are getting stronger, bigger, and slower, meaning they can sit over us for longer.”

If you’ve noticed hurricanes getting worse in recent years, it’s not your imagination. Climate change is bringing wetter and more intense hurricanes to the United States. For example, one recent study showed that climate change made Hurricane Florence 50 percent worse. The storm dumped enough water to fill the Chesapeake Bay.

3. “Climate change hits us in the Achilles’ heel.”

Peering into a climate-changed future is a bit like looking into a fun-house mirror where all of your worst features are accentuated. Texas, for example, is susceptible to a host of climate hazards, from heatwaves to hurricanes. It’s experienced more costly weather disasters than any other state. Climate change will only boost these extremes, bringing even more drought, flooding, and high temperatures.

You may have heard that everything’s bigger in Texas. That’s certainly true of climate change.