When Hurricane Sandy hit New York City five years ago this Sunday, Melba Torres was prepared to evacuate. But she says the city she’s called home her whole life was not prepared to help her.

Torres lives with cerebral palsy and uses a wheelchair. With the power out in her public housing unit on Manhattan’s Lower East Side, she couldn’t use the elevator to leave her 8th-floor apartment. Even if she had made it out, the bus downstairs that would take her to an emergency shelter wasn’t equipped for people in wheelchairs.

So she rode out the storm in her apartment, spending six days in the dark with no heat or running water. She couldn’t charge her electric wheelchair, so she spent most of that time trapped in bed.

“I would hope not to have to live through something as tough as it was,” Torres says, recalling her experience.

More than one in ten New Yorkers live with a disability. There, as well as in Puerto Rico, Florida and Texas, emergency response efforts have often left this population behind amid natural disasters — the most gruesome example being the deaths of eight Florida nursing home residents in the wake of Hurricane Irma. 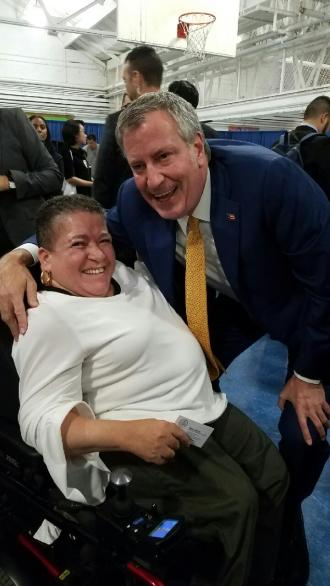 After Sandy, a federal judge ruled in a landmark class action lawsuit that New York City had discriminated against disabled residents by failing to include them in its emergency response planning. The judgement provided no money for the plaintiffs, which included Torres, but did outline steps for the local government to take so that past mistakes could be avoided in the event of another devastating storm.

The 2013 ruling was a huge victory for disability rights advocates not only in New York City but across the United States. But it hasn’t immediately ushered in a new era of  emergency response that takes the needs of people with disabilities into account. After the worst hurricane season in U.S. history this year, proponents say there’s still much to learn from what happened during Sandy — and much work left to be done to make sure everyone is accounted for.

Kathryn Dyjak’s job as an advisor to NYC Emergency Management on the needs of the city’s disabled residents exists as a result of that 2013 ruling. She says the city has made progress on each of the points outlined in a memorandum of understanding — sheltering, transportation, emergency communications, power outages, and the creation of a disability community advisory panel. And she adds that some public housing buildings are now equipped with backup generators on rooftops so that elevators can run when the power goes out.

“That makes it harder for people to have the resources to evacuate by themselves, to have somewhere to go, to have resources to spend to get medication or whatever they might need in an emergency,” Dooha explains.

Dooha is concerned because New York City missed a key benchmark for providing accessible shelters during emergencies. The federal court had ordered the city to create at least 60 such emergency management centers by September of this year. To date, there are 17. The court has granted a one-year extension, and Kathryn Dyjak says she is confident that the remaining shelters will be completed by the new deadline.

Accessibility of emergency shelters was also an issue for Houston residents with disabilities during Hurricane Harvey. During and after the storm, Frederick Jefferson worked with the Greater Houston Autism Coalition to assist displaced residents. He has an 18-year-old daughter with severe autism and leads a group for fathers of children with disabilities. He was surprised to find that individual shelters in Houston couldn’ttell his group how many people they’d taken in who had a disability.

“That’s the only way you’re going to be able to serve them,” Jefferson says. “You have to be able to break the disability down. Once there’s a breakdown, you know the type of equipment and supplies that family needs.”

If a shelter is unable to accommodate people with disabilities — because there are no accessible toilets or basic needs cannot be provided — it might send them to a nursing home or other institution meant for people who need a higher level of care. Advocates say this amounts to a civil rights violation. Once people are in a nursing home, for instance, it can be very difficult to regain their previous independence.

“Sometimes an individual with a disability that was successfully living in the community can have their ability to make their own decisions stripped away from them,“ Sean Jackson, supervising attorney for Disability Rights Texas, wrote to Grist in an email. He says that when people with disabilities are admitted to nursing facilities or other institutions against their will, it can be traumatic and disempowering.

“Most people with disabilities simply need accessibility, and if that accessibility is accommodated, we can maintain our independence like anybody else,” said Marcie Roth, CEO of Partnership for Inclusive Disaster Strategies and a former director of the office of disability integration and coordination at FEMA.

Advocates like Roth say that until cities reach out to their disabled residents to assess their needs, residents like Melba Torres will continue to worry about what will happen when the next storm hits. Even though she was a key member of the plaintiffs whose harrowing experiences led to the new procedures in New York City, Torres feels no safer in her 8th-floor apartment.

“If the storm were to hit again tomorrow, I sincerely believe that we would not be in a better situation than we were five years ago,” Torres says. Her building does not have a backup generator on its roof to power its elevator nor has it installed an evacuation chair — which allows wheelchair users to go down stairs when the power is out.

“As a woman with a disability — as a woman who lived through it and had the courage to talk about it, to go to court to see a judge and do everything I had to — it hurts my heart to say that we’re no better.”