National parks are at the front lines of climate change. The creep of change is playing out in places that Americans have set aside to be preserved for the enjoyment of future generations.

A new poster series takes the landscapes that have inspired countless road trips and daydreams of summer vacation and imagines what they’ll look like in 2050 if climate change is allowed to continue unchecked.

Hannah Rothstein, a Berkeley-based artist who created the series, said she was interested in doing a climate project that reinvented art people were familiar with. And national parks are some of the most iconic, visited places in the U.S. Last year, a record 325 million visited parks around the country.

But with countless images of parks, Rothstein wanted to cut through the noise. She settled on recreating a series of classic Works Progress Administration posters printed between 1938 and 1941. The originals were created to signal to a Depression-weary public that the parks were open and full of spectacular sites to see.

Their legacy lives on in park gift shops and visitor centers around the country in part because the scenes they depict are instantly recognizable. Old Faithful, towering redwoods, and the cavernous Grand Canyon depicted on the posters all speak to why these landscapes were set aside from commercial use.

“I think a lot of people recognize the posters and that was key to the success (of this project), to have something familiar to people,” Rothstein said. “They could be familiar, but then have to look twice to figure out what was different.”

What’s different in Rothstein’s posters is the impact climate change is likely to have on iconic landscapes. She researched the threats to parks and species that call them home, and her posters reveal a future where climate change is allowed to trample scenic vistas. The posters show the impacts far more powerfully than a scientific paper.

Rising temperatures are increasing the risk of wildfire, melting glaciers, and killing fish in streams across the national park system. Sea-level rise threatens to flood coastal parks from the Statue of Liberty to the Everglades. Ocean acidification poses a threat to the underwater ecosystems in places like Dry Tortugas. 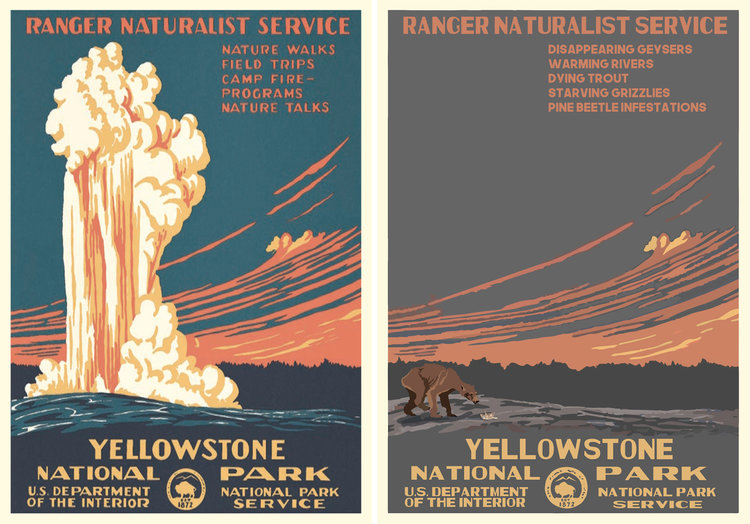 The National Park Service has been a climate leader in the federal government, preparing parks for changes. But it’s a vast system, with 417 sites under its purview. It also faces a $12 billion maintenance backlog.

Secretary of the Interior Ryan Zinke, who oversees the national parks, did acknowledge climate change in his hearing, citing the disappearance of Glacier National Park’s ice as a clear indicator. He also questioned how big humans’ contribution was, a view outside established climate science. That makes it an open question as to whether the agency will continue to be a leader in climate change over the next four years.

Harkening back to the WPA posters is also a sly nudge that the U.S. is capable of responding to grave threats with great action. The posters were created as part of a Depression-era program designed to put Americans back to work. The WPA and other New Deal programs were key to helping the U.S. climb out of the biggest financial crisis it had ever faced.

The original WPA posters provide a positive message about the multitudes of American landscapes. Rothstein’s versions provide a warning about how those inspirational landscapes could be transformed for the worse unless the U.S. — and the world — undertakes significant action to reduce carbon pollution.

“I don’t want this series to be something so overwhelming [that people] feel they can’t act,” Rothstein said. “I’m hoping it’s a call to action and call to dialogue. We can cut down on the effects.”