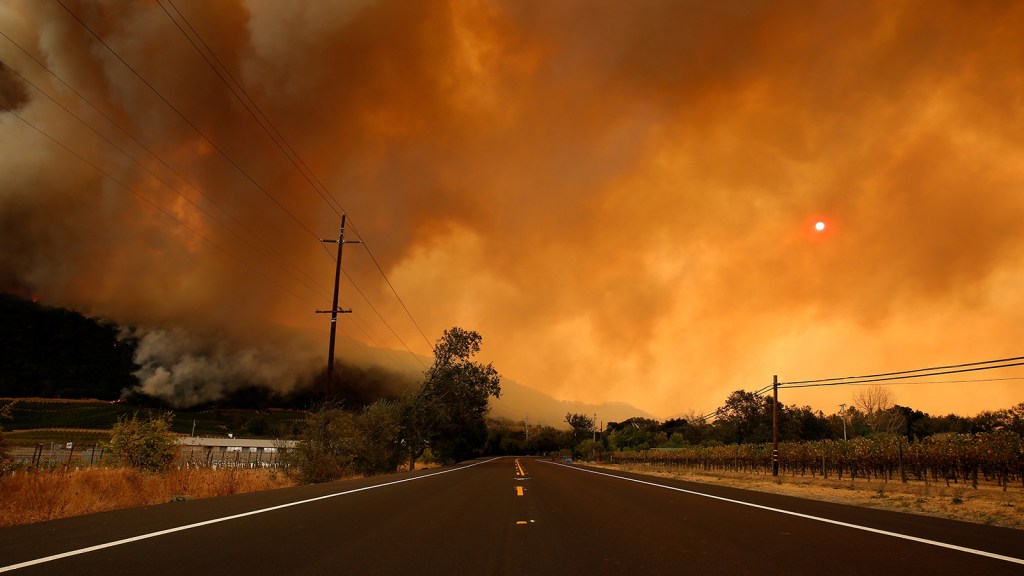 The wildfires that swept across Mendocino, Sonoma, and Napa counties in Northern California last week devastated many of the region’s legal cannabis growers, torching their crops and facilities at peak harvest time and leaving smaller farmers at risk of collapse.

The fires, which continue to smolder, are the deadliest and most destructive in the state’s history — killing at least 41 people and claiming 220,000 acres and 5,700 homes. The blazes incinerated untold amounts of pot, just as legal sales are set to begin in the state in January.

“The opportunity of legal cannabis is in ashes for many longtime California growers and their communities,” wrote Hezekiah Allen, executive director of the California Growers Association, in a message to the trade group’s 1,200 members. “Over the course of the last 18 months, these growers have spent their life savings getting permits and preparing for state licenses.”

Allen said the fires had destroyed at least 21 farms and damaged two others. Even for farms that didn’t burn, the crops may die for lack of water, as many are in areas that are now off-limits. Unlike grape farmers who lost vines in the fires, cannabis growers don’t qualify for crop insurance and can’t apply for federal assistance grants.

Allen was working with state officials to create an insurance program for growers, but it wasn’t in place yet. The farms were already under pressure from growing competition from much bigger operations. “It was just really bad timing,” he told me.

The cause of the fires is unknown. Some are pointing fingers at sparking Pacific Gas & Electric power lines on ridge tops. But the real culprit looks like climate change, which will put cannabis growers — and the state at large — at risk in the future, as reported by Sonoma County’s weekly newspaper, The Bohemian.

“That’s the way it is with a warming climate, dry weather and reduced moisture,” California Governor Jerry Brown said in a press conference last week. “These kinds of catastrophes have happened, and they are going to continue to happen.”

All the conditions in place before the fire — hot, dry weather, massive fuel loads, and hurricane-force east winds — are hallmarks of a changed climate. “Climate sets the stage, and we have strong evidence that the global warming that’s already happened has increased wildfire risk in the western United States, through the effects of temperature drying the landscape,” said Noah Diffenbaugh, a Stanford University climate scientist.

Terry Garrett, who serves on the Sonoma County Economic Development Board and its Cannabis Task Force, says damage reports are still coming in, but the losses could be substantial. A typical 10,000-square-foot operation would lose about $1 million in pot, plus infrastructure, he said.

Garrett estimates that Sonoma County produces about $2.5 billion in cannabis revenue per year. That includes indoor and mixed-light production, which is harvested three to five times a year. Outdoor production, the kind most likely to be damaged by the fire, represents the most potential for loss since that crop hadn’t been harvested and dried.

For the cottage-scale growers whose farms were destroyed in the blazes, the disaster intensifies financial pressure that was already pushing them to the brink. The first two weeks of October are generally peak harvest for cannabis growers. Flames got the crop before they could.

To help farmers who suffered losses, the growers association launched a recovery fund. But even that good-faith effort hit a snag. YouCaring, the platform receiving wildfire relief funds for the association, sent the $9,000 raised so far back to the group because of a policy against cannabis campaigns. So the association has moved its fundraising to a new platform.

Just as the fire did not discriminate, incinerating homes in upscale ridge-top areas as well as a vast swath of more than 1,000 working-class homes in hard-hit Santa Rosa, the fire took out pot farms big and small, too.

CannaCraft is Sonoma County’s largest cannabis producer and distributor. The company lost 15 greenhouses in the fires, which represents about 5,000 plants. As a larger company, it will be able to absorb the losses, but smaller operations already struggling to afford often costly state and county permits and fees will have a harder time rebounding. CannaCraft has opened its offices to smaller competitors to help them get back on their feet.

“Getting hit at this time is going to be pretty devastating for some of these people, as they were just coming above board trying to create legitimate businesses,” said Dennis Hunter, CannaCraft’s founder.

A bit of good news: In Sonoma County, growers who had applied for permits are eligible for tax relief if their crops were destroyed or damaged. And although the losses may be extensive, dispensary owners say that because of the record amount of cannabis grown in California this year, they will backfill their supply from other sources. That will benefit small growers who made it through the fires and are struggling to adjust to the new, legal market.