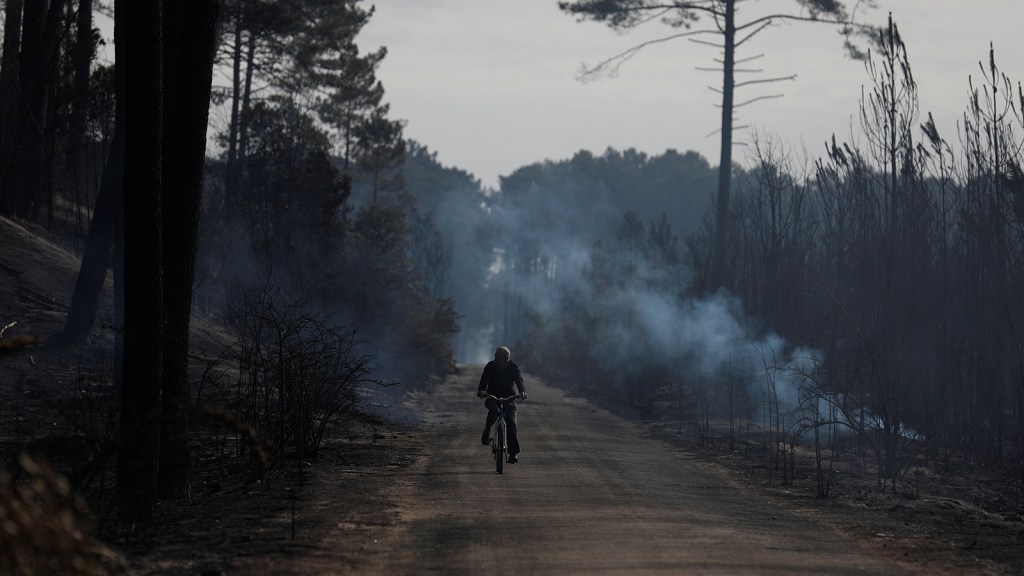 REUTERS/Rafael Marchante
we did start the fire

This week, a hurricane broadsided Europe — a rare event considering most of the continent is closer to the North Pole than it is to the tropics. That would have been enough to make worldwide news, but the continent was due for much more.

As the storm, named Ophelia, approached, it was the strongest hurricane ever recorded in the eastern Atlantic. Although weather watchers were initially focused most closely on Ireland, where the storm made landfall, its deadliest impact occurred hundreds of miles south in Portugal and Spain.

There, strong winds stoked hundreds of wildfires, killing more than 40 people. The ghastly images from southwestern Europe looked less like real life than illustrations from a cautionary fairy tale about the end of the world. Being there, as one person wrote, was like “a nightmare world of smoke and ash.”

These fires would have been the deadliest in Portugal’s history, were it not for massive blazes in June that killed more than 60 people, trapping many in their cars, as flames advanced too quickly for them to escape.

With its vast forests and typically warm and dry summers, Portugal is already Europe’s wildfire capital. And in recent decades, its profound and unique socioeconomic vulnerability to fire has only grown. Last year, half of the fire acreage burned in all of Europe lay in Portugal — a trend attributed both to haphazard forestry practices and climate change bringing hotter and drier weather.

This year, the sheer scale of the fires has been staggering. On Sunday alone, wildfires burned at least 300,000 acres — more than is normally burned in an entire year. Smoke from the fires quickly spread as far away as London.

Portugal’s wildfires this year have brought sharp focus on the escalating risk of these blazes — and what little officials have done to prevent them. Popular backlash prompted the resignation of a senior government minister and a formal request for a vote of no confidence in the ruling party. But they have also brought a lesson for the rest of the world: As climate change escalates, wildfires are a problem without an easy solution. (Just ask California.)

In a struggling post-recession Portugal, suppliers to its huge paper industry have accelerated a switchover from native species to faster-growing eucalyptus. Since trees consumed by fire can now be replaced more quickly, fire prevention — simple actions like trimming branches and clearing underbrush that could greatly reduce the country’s fire risk — has fallen by the wayside due to cost cutting. Add to that, more and more people are fleeing Portugal’s rural areas — leaving an aging population behind — it’s not clear who will be able to do that work even if resources were available to fund it.

“It really is a textbook example of wildfire as a socio-natural hazard,” José Miguel Pereira, a forest ecologist at the University of Lisbon tells Grist via email. Or to put it another way, human activity is making wildfires worse. These infernos are a product of our disregard for the fact that nature is now almost entirely something we’ve created — these disasters aren’t natural.

And as you know, our influence goes beyond simply neglecting tree management. There’s a growing consensus that the most important reason behind the recent surge in megafires is weather. September was the driest month in Portugal for at least 87 years, and this summer was among the hottest ever measured. All that’s led to a wildfire season that’s 525 percent worse than normal.

Climate models show that a warmer world will mean a drier southern Europe, and increasing ocean temperatures will likely bring more hurricanes further northward. That combination will boost the frequency of massive wildfires in Europe, especially in places like Portugal. On our current warming track, recent research shows the Mediterranean will cross a threshold into megadrought in the next few decades. Many of the trees in the region will likely go up in flames before next century.

This week, with the addition of Ophelia’s winds, weather conditions favorable for fire growth were extreme — and they occurred at a time of the year when farmers routinely set the ground ablaze to clear land. The mix resulted in fires so intense they created their own weather, spawning rare pyrocumulus clouds, literally a fire cloud.

“To the best of my knowledge this is new in Europe,” Paulo Fernandes, a forest ecologist at the University of Trás-os-Montes and Alto Douro, wrote to Grist, adding the weather was far outside what would be expected for mid-October. ”Extreme fires cannot be mitigated by a stronger firefighting force.”

What happened this week in Portugal points toward the scariest aspects of the Anthropocene: We are changing the world around us so fast that, in many cases, adaptation will be near impossible. As a hurricane, Ophelia was literally off the charts, and meteorologists have no doubt that the storm made the fires worse, rapidly transforming the smallest flames into towering infernos.

In my discussions with colleagues this week, not one weather or climate expert could think of an example of a tropical cyclone in the last 90-plus years that has sparked such a series of megafires. The closest corollaries were a 1978 storm in western Australia and a 2011 storm in Texas. Each fanned large fires, but the loss of life was relatively low. In 1923, a typhoon worsened the impact of fires sparked by a massive earthquake in Japan – but again, that required an earthquake.

Like Portugal, California has a Mediterranean climate that features a long summer dry season. In the wake of the state’s record-breaking wildfire season, which occurred under similar weather and climate conditions as the Portuguese fires, there’s a lot the West Coast can learn from what’s going wrong in Portugal. The most important lesson: Once huge fires get going, there’s not much that can stop them. The best hope, instead, is reducing risk in advance by preparing forests for the inevitable.

On Thursday, a bipartisan group of Western senators proposed a reform of forestry practices that will do just that. And it’s already getting praise from firefighters, environmentalists, and industry. In 2017, the U.S. spent a record $2 billion on fighting wildfires, and the new bill would support low-cost preparedness efforts — like those shelved in Portugal — to try to prevent future fires.

In a statement accompanying the release of the bill, Washington Sen. Patty Murray, one of its sponsors said the time for action is now: “We can’t sit by and let devastating wildfires become the new normal.”