Carey Poindexter has been checking the air quality before deciding whether it’s safe to go outside for much of his life. The 19-year-old has such severe asthma and allergies, doctors predicted that he wouldn’t live past the age of 10. His symptoms are usually more serious in the spring and winter, but this year, summer has been worse. With record-breaking heatwaves and wildfires raging nearby, Poindexter spent most of his summer inside. 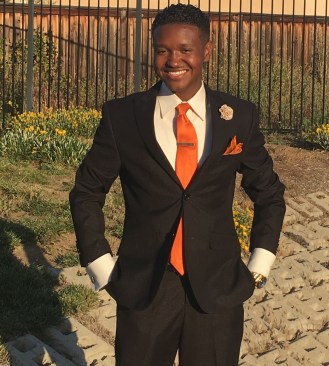 “It really has been pretty rough for people suffering from lung disease,” he says.

It’s been a punishing summer in California. But it’s worse for those who live in the most polluted areas, and as a result are already at heightened risk for respiratory diseases like asthma and chronic obstructive pulmonary disease (COPD). By exacerbating this summer’s heat waves and wildfires, climate change is stacking health burdens on communities already breathing bad air.

On Monday, California released a Climate Change Assessment detailing the mounting risks the state faces as the planet warms. Among the report’s findings: Forests will become even more susceptible to extreme wildfires. By mid-century, heat waves could occur four to 10 times more frequently and last two weeks longer, leading to more heat-related deaths and illnesses.

And those findings spell disaster for people who are already struggling to breathe amid this summer’s climate-driven calamities. Hot temperatures cause lungs to strain as the body tries to cool itself. Heat speeds up the formation of smog. And forest fires also add pollution to the air.

“It’s just a snowball effect,” says Afif El-Hasan, a pediatrician and a national spokesperson of the American Lung Association. On top of the immediate health effects, climate change can exacerbate inequities that compound health risks, he adds.

If someone has limited resources and lives in a polluted area, “for them to open the window because they can’t afford air conditioning becomes a health dilemma,” El-Hasan points out. 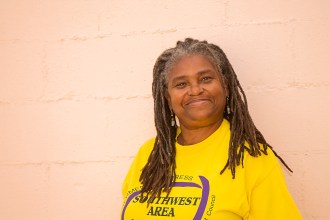 Olivia Barbour is a 67-year-old resident of South Los Angeles who lives with COPD. Her home is on Imperial Highway, near the busy 110 and 105 freeways. “I don’t know if anybody else notices, but I think it’s even hotter closer to the freeways with all that traffic and smog,” she says. And she’s right — urban areas with lots of pavement and cars are hotter than surrounding areas. “I thought I could help myself by buying a portable air conditioner. However, I can’t afford to run the darn thing,” Barbour says. She found that it increased her electricity bill by $20 after using it for just one day.

The heat is also affecting her ability to work. Barbour sometimes does outreach for green grassroots groups like SCOPE or gathers signatures for political campaigns. But she says she can’t door-knock this summer because of the heat. And that in turn has made it harder for her to afford the health care she needs. “I was supposed to be taking five nebulizer treatments every day to manage my COPD,” Barbour says. “I just can’t afford it. So I stopped.”

Poindexter lives in one of the counties with the worst air pollution in the nation. This year, Riverside County ranked second for the most ozone pollution and sixth for the most year-round particle pollution.

“It’s so bad to where if you just look outside, you can see a greyish horizon,” he says.

The smog he sees is made worse by rising temperatures. Ground-level ozone, the pollutant that makes up a majority of smog, is created by a chemical reaction between pollutants released by vehicles, power plants, and refineries. Those chemical reactions speed up when it’s hot out.

What effect does increased ozone have on your lungs? “It’s kind of like giving a sunburn to the lining of your lungs,” says pediatrician El-Hasan. “It’s very irritating.”

Poindexter wasn’t just scanning the horizon for smog, but for smoke, too.

The Holy and Keller fires came pretty close to Poindexter’s home in Temecula. He and his mother decided to take a cruise to Mexico to escape the smoke.

Still, Poindexter knows he and others with lung disease can’t always get away from poor air quality. He voted for the first time this year, and he voted for clean air. “Whether it’s a proposition or an elected official, the first thing I look at is what they’re going to do for air quality,” Poindexter says.