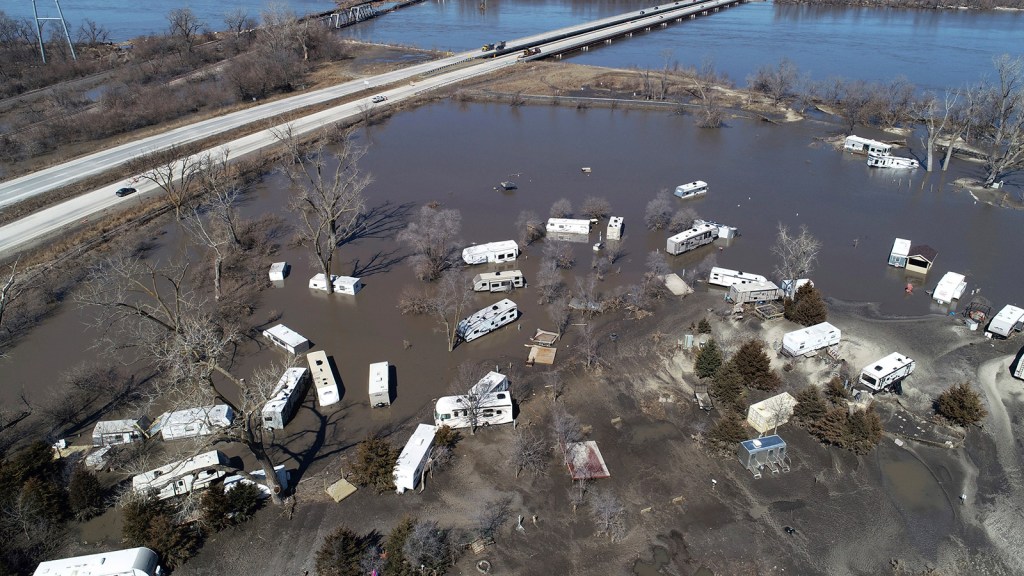 Most of Nebraska is a disaster area with 95 percent of the state’s population affected by flooding. According to FEMA, total economic losses are approaching $1 billion, including more than $400 million to agriculture and more than $400 million to public infrastructure. Cascading levee failures along the Missouri River have meant that, for the time being, there’s essentially nothing holding back the floodwaters.

Six Nebraska public drinking water systems went offline, and dozens of wastewater treatment facilities failed — including one for Omaha which officials say could take weeks or months to restore. In several cases, raw sewage is being discharged into streams and rivers.

For rural residents who get their water from private wells, that added pollution could prove dangerous. Emergency room visits for gastrointestinal issues increase after heavy rains.

As climate change makes rainstorms more intense, this problem will only worsen. Across the Great Plains, the frequency of heavy downpours has increased by 29 percent over the past 60 years. Flooding isn’t just a quickly damaging natural disaster that destroys roads, bridges, homes, and factories — it’s a lingering public health issue.

This problem isn’t unique to Nebraska. In recent years, floods in Texas, the Carolinas, and coastal Virginia have swept hazardous material from the petrochemical industry, hog farms, and agricultural land into waterways, threatening public safety.

As of 2015, there were 772 cities — mostly in the Midwest and Northeast — with outdated sewer systems that funnel waste directly into streams as a matter of course even without record-breaking floods. These systems were cheap to build in the 1800s, but now people are starting to reconsider “combined sewer overflow” systems.

Pete Buttigieg, mayor of South Bend, Indiana, has campaigned on his record of using eco-friendly methods, like rain gardens and expanding parks near floodplains, and technology to deal with its combined sewer system. City officials say they’ve saved $500 million by adding smart sensors to its sewer system.

Cities are trying to hold polluters accountable for cleanup costs, too: A new wave of “failure to adapt” lawsuits might help put pressure on industry to put more foresight into how climate change might turn their infrastructure into toxic waste sites.

Lawsuits and tech aside, the most effective way of adapting to climate change may ultimately be a planned retreat from coastlines and waterways — giving more space for nature as a buffer.