Those keeping tabs on the Democratic presidential primary — which has its fifth debate Wednesday in Atlanta, Georgia — have probably heard the term “environmental justice” come up often over the past few months. The term refers to the outsized burden that both the causes and effects of climate change place on low-income and minority communities around the United States, and it’s a major tent pole of many of the climate plans put forward by candidates, from former Vice President Joe Biden to New Jersey Senator Cory Booker. It’s been mentioned in previous debates and was on the lips of nearly every candidate who participated in CNN’s September climate town-hall marathon.

But on the heels of a historic environmental justice presidential forum, held in Orangeburg, South Carolina, earlier this month, leading grassroots advocates say that lip service on this issue is not enough. It’s past time, they claim, for the 2020 Democratic candidates to detail for voters how they plan to make good on promises to tackle issues such as pollution and climate impacts in vulnerable communities across the nation.

“We want the tap dance to stop,” said Michele Roberts, the national co-coordinator of the Environmental Justice Health Alliance for Chemical Policy Reform, which aids grassroots organizations working in communities burdened by toxic chemicals, polluting facilities, and contaminated sites. ”We want to see how it is that their plans will address and not leave any communities behind.”

Roberts was one of a handful of environmental justice leaders who spoke during the South Carolina forum, which was hosted by the National Black Caucus of State Legislators and was the first-ever presidential forum to address environmental justice issues. (Editor’s note: Grist was one of the forum’s media sponsors.) She described the forum as a victory on many fronts, particularly for elevating the concerns of marginalized communities that are typically not addressed on the national political stage. But only six of the 2020 Democratic candidates appeared at the forum, attendance that Roberts described as a disappointment. (Of those six, only Booker, Massachusetts Senator Elizabeth Warren, and billionaire activist Tom Steyer will be on the debate stage Wednesday.)

“We expected all who say their priority is about equity and justice and environmental justice — we expected every last one who would allow that to roll off their lips, that they are for it — to be there,” said Roberts. She made a point during her speech, which helped open the forum, to tell the no-shows that they now need to “catch up” — though she didn’t single out any particular candidate. 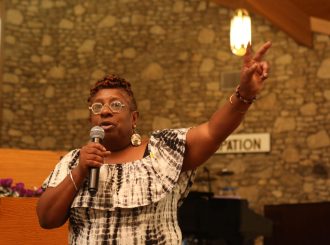 Part of catching up is understanding that while presidential candidates can talk about the way that the federal government can prioritize equity issues when it comes to climate and the environment, ultimately the change has to happen at the community level — and with the input of local residents, activists and government officials. “It’s what we call the bottom-up process,” Roberts told Grist. That means, a community is speaking for itself and educating its local officials, so they all can work together and begin to build relationships with representatives at the state and federal levels. Organizers, like Mitchell, want to know how candidates plan to foster that process.

Harold Mitchell Jr., who served as a member of the South Carolina House of Representatives from 2005 to 2017, also spoke at the forum. He believes that it’s not enough for the presidential candidates to be fluent on environmental justice issues. The problems facing communities, he said, require urgent action.

Mitchell speaks from experience. As a young man, he began mysteriously losing weight and coughing up blood while living in his parents’ home, which was near a shuttered fertilizer plant. His battle to determine what was sickening him, his family, and other residents in his Spartanburg community led him to spearhead an effort to remediate a contamination zone of abandoned industrial sites and a waste dump in his neighborhood.

“There were days when I didn’t know if I could sit up or stand up,” Mitchell told Grist. “So you take every opportunity to try to make something happen because you don’t know what the next day will bring.”

According to Mitchell, tackling pollution, contamination, and climate justice issues means examining impacts and needs, then proposing solutions to turn communities around. That’s opposed to parachuting into a community to put a spotlight on residents’ pain for political gain. “A lot of this can be fixed, but we’re not looking at solutions,” he said. “We’re looking at putting the magnifying glass over the problem and talking about it.”

After decades spent working in these fence-line communities near polluting industries, Mitchell and Roberts know the importance of local-state-federal collaborations that can direct financial resources to address problems on the ground. That’s what Mitchell learned when he founded the ReGenesis Project, a nonprofit that became a model for an environmental justice program at the Environmental Protection Agency. ReGenesis takes a multi-prong approach to remediating contaminated sites that folds in housing, job training, healthcare, and infrastructure as part of that process.

Mitchell started this work with the help of a $20,000 grant from the EPA. Federal funding for environmental justice issues is great, but he told Grist that today not enough impacted communities across the country are tapping into the available programs and funds at the federal level to remediate contaminated sites. And by not getting involved, they risk having a site cleanup transform into a mechanism to displace those same communities.

“My problem is that these sites all over are getting cleaned up expeditiously and put into play and are becoming economic engines,” Mitchell said. “But the thing is: We’re not a part of it.” 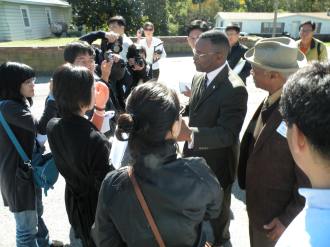 Harold Mitchell, center, talks to reporters from Korea and members of the Institute of Social Conflict during a 2008 tour of the ReGenesis project in Spartanburg, South Carolina. Courtesy of Harold Mitchell

Mitchell wants to hear more from the Democratic candidates on the potential opportunities for local residents to help revitalize their communities. He suggested programs that offer job training so local residents can clean up polluted sites or creating jobs around climate resilience preparation programs or training residents to work in the renewable energy sector, to name a few. “There are so many opportunities to move that needle,” he said.

As part of her work to help create the Equitable and Just National Climate Platform — which was designed by environmental justice advocates to identify priorities for a national climate policy agenda — Roberts met with residents in communities across the country asking what should be included. Their wishlist included: 100 percent pollution-free economy, a clean and just transportation system, and the right to return to their homes after climate disasters strike their communities.

According to Roberts, she has yet to hear how the Democratic presidential candidates will deliver on this while at the same time addressing the economic inequities facing these same communities. What she does know is that any solution requires that local residents, activists, and organizations have a seat at the table as active participants in the environmental justice discussion.

“Our communities are legacy communities that have been harmed by centuries of racism, colonization, and economic injustice and exploitation,” Roberts told those gathered at the forum. “We are part of the change [in] that we hold the solutions that are necessary to make effective change in this country.”

Moving forward, and with an eye on the early primary races in states such as South Carolina, Mitchell said environmental justice advocates will be closely watching candidates who ask for endorsements. To earn that support, he explained, candidates must start by having conversations with local residents, and understand that this means expanding the conversation with minority communities beyond common topics like criminal justice reform.

“Let’s put something on the table,” Mitchell said. “If you want our support, here are these communities, here are the impacts, here’s climate. Let’s have that conversation to see where you’re at.”