Chuck Schumer’s ready to push on climate, just not for a Green New Deal 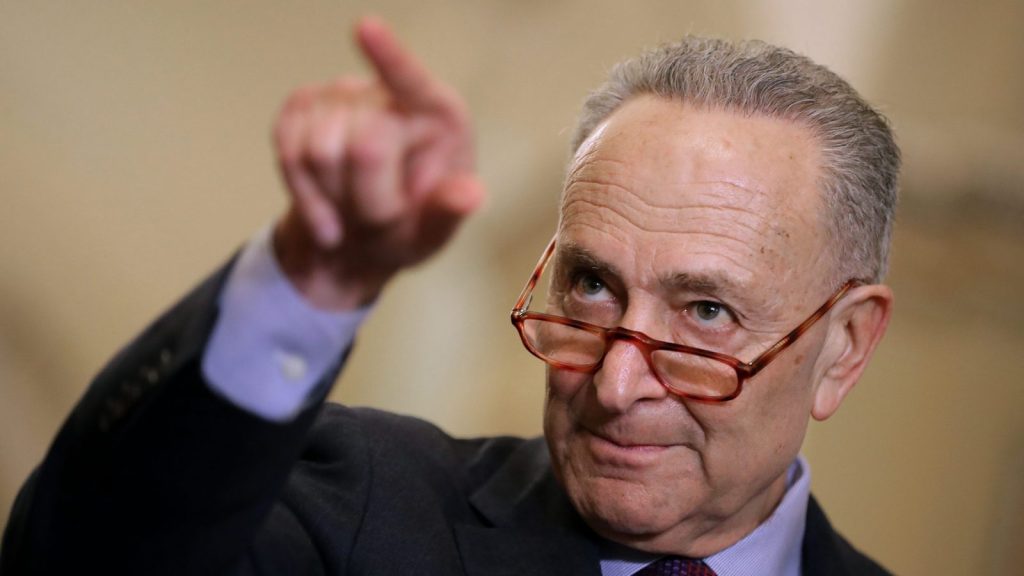 Chuck Schumer’s ready to push on climate, just not for a Green New Deal

Chuck Schumer wants Democrats to use the climate change debate to their advantage in 2020. In a New York Times interview published Monday, the Senate minority leader previewed a political strategy based on a barrage of daily floor speeches attacking Republicans for failing to take global warming seriously and a proposal to create a new committee to deal with the issue. “This is the first time Democrats have decided to go on offense on climate change,” he declared.

The promise to take the climate fight to Republicans is a welcome one. It would be a bold rebuttal to GOP leaders who can’t contain their giddiness about the prospects of using the Green New Deal as a political weapon and to the rest of the right as it tries to turn a pressing existential crisis into a joke about cow farts. Schumer’s comments show that he and other Democratic leaders have finally noticed the bevy of polls indicating that Americans — younger ones in particular — are increasingly worried about global warming and believe Democrats are far better suited than Republicans to do something about it. This issue really could be a political winner for Democrats.

Schumer’s words aside, though, it’s hard to spot the actual “offense” in his strategy. This is by design. The unspoken goal of Schumer’s plan is to provide his more moderate colleagues cover — not from the right, which wants to ignore the realities of human-made climate change, but from the activist left, which is demanding urgent action.

Consider what is effectively step one in Schumer’s strategy: He wants the entire Democratic caucus to simply vote “present” if Mitch McConnell forces a Senate vote on the Green New Deal, as the majority leader has promised to do in the coming weeks.

Schumer’s ploy is clever in only the most immediate and narrow sense. Yes, it would conceivably take some of the air out of McConnell’s show vote, which itself is a cynical ploy, but it’s not as though Republicans will then throw up their hands and move on. The GOP will continue to use the Green New Deal — and an intentional misreading of it — to paint Democrats as leftist radicals who are coming for Americans’ cars, cows, and general way of life. A “present” vote isn’t going to change that, especially when six of the resolution’s Senate cosponsors are seeking the Democratic nomination for president. Does Schumer think the GOP ad men are going to bark an order down the hallway to scrap the latest attack ads against Kamala Harris because she voted “present”?

Meanwhile, Democrats presenting a united front when there clearly isn’t one would be a setback to the climate movement. It dismisses the Green New Deal as a political talking point that no one in the party is taking seriously, not even its cosponsors.

That would be a real shame since, as I’ve written before, the Green New Deal serves a litmus test on the left, one that can differentiate between those who accept the general reality that humans are warming the planet and those who accept the specific global consensus that governments need to take urgent, concrete steps to address the crisis. A politician can pass that test without signing on to the entire Green New Deal framework as crafted by Representative Alexandria Ocasio-Cortez and Senator Ed Markey, but that politician would need to get specific about which of its goals aren’t feasible or necessary. You don’t have to study the viral video of Senator Dianne Feinstein’s exchange with young climate activists like the Zapruder film to see how the Green New Deal is exposing a crucial intraparty divide.

Schumer’s plan would enable Feinstein and fellow moderates to continue taking refuge in generalities, as they did last week when all 47 members of the Democratic caucus introduced a nine-line resolution that concluded “the United States and Congress should take immediate action to address the challenge of climate change” — without offering any hint of what that action should be.

That’s an important sentiment, but it’s not progress. It’s a return to where the climate debate was before AOC and her Green New Deal came on the scene — a status quo that was defined by the same inaction that Schumer believes favors his party in the political present. Publicly shaming the GOP for its climate denial with floor speeches as Schumer proposes is easy, though it’s probably not effective.

Consider what happened four years ago, shortly after the GOP reclaimed control of the Senate in the middle of Obama’s second term: Democrats were convinced they could score a few political points by forcing the GOP to go on record about its climate change denialism; Republicans promptly reminded them it’s impossible to embarrass someone about something he’s publicly proud of. With the world watching, the upper chamber voted not once, but four times to reject amendments acknowledging that humans are contributing to climate change.

If Schumer can persuade his caucus to ignore the Green New Deal, we’d be right back where we were in 2016, when the defining fault line in the climate debate ran so neatly between the two parties that it often went without saying. It was that dynamic that allowed Hillary Clinton to talk a big game about climate change as a major issue of her 2016 campaign one day, then turn around a few days later and publicly dismiss as unrealistic the climate activists urging she do more. The ensuing heckling aside, Clinton could trust that the climate crowd would come around by Election Day, since they had no other choice. If Schumer has his way, the 2020 nominee will be able to do the same.