Climate change is coming for our toilets. Here’s how we can stop it. 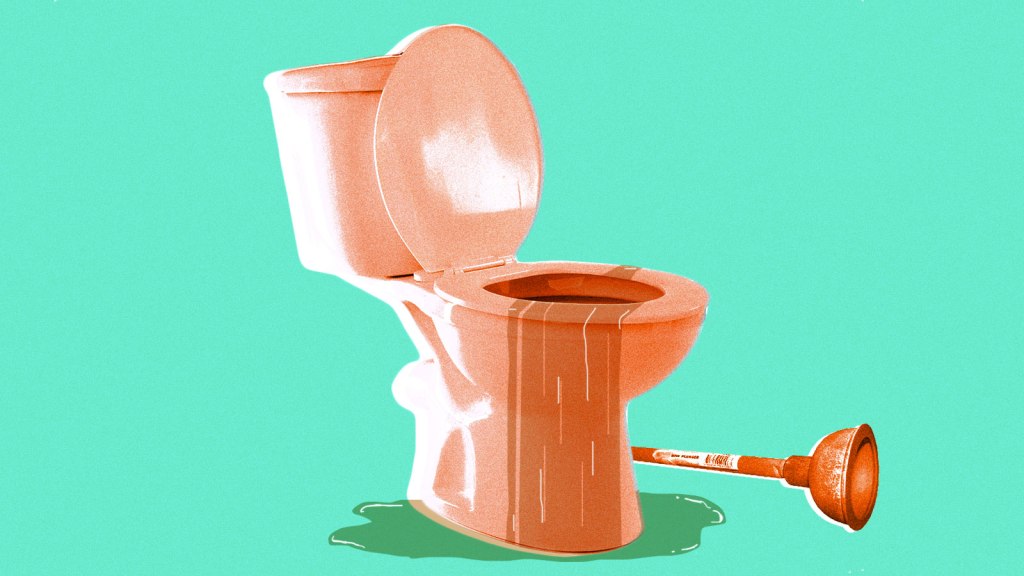 Climate change is coming for our toilets. Here’s how we can stop it.

Of all the amazing conveniences Americans are lucky enough to enjoy, the bowl that makes the poop go away is one of the best — on par with the tap that turns the water on and the box that makes the food hot. But I am here to ruin your day and tell you that climate change could compromise the humble toilet. If we don’t act soon, the consequences could be disgusting.

About one in five households in the United States depends on a septic system to eliminate waste (that’s 60 million households, for those of you who don’t like fractions). Septic systems not only dispose of our waste, they also protect public health, preserve precious water resources, and provide long-term peace of mind for city planners and plumbers alike. But that septic-associated security could go down the drain, according to information in a U.N. report on oceans published last week.

While the report is not specifically about your bathroom, per se, it shows how a stealthy threat — sea-level rise — could make it more difficult for people with septic systems to flush their toilets. A brief primer on septic systems, which are common in rural areas: The stuff in your toilet goes into an underground tank, where it breaks down (I’m gagging) and gets drained out into a leach field (gross) that’s at least 20 feet from your house. In order to function properly, those drainage fields have to be relatively dry.

Rising groundwater levels (a problem that accompanies sea-level rise) are soaking the fields, making it more difficult for our waste to break down and get absorbed properly. Rising groundwater also affects the soil’s ability to filter out harmful bacteria, which poses a public safety risk. And to make matters worse, increased rainfall, another climate change-related perk, is exacerbating the issue. It’s a back-up problem that can’t be solved with a plunger, if you catch my drift.

New England, where roughly half of homes rely on septic systems, is especially at risk. So is Florida — home to 12 percent of the nation’s septic systems. Miami-Dade county commissioned a report on vulnerable toilets this year and found 64 percent of tanks could run into problems by 2040. Minnesota, an inland state, has to contend with another climate-related toilet problem: lack of snow. Snow, which keeps things nice and insulated, has been noticeably absent in early winter and spring. Freezing temperatures are still kicking around, though. That means the frost line has taken a dive deep underground and compromised thousands of Minnesotans’ septic systems. See? Septic tanks are getting it from all sides these days.

So is the solution to dig up all the septic tanks, put them on stilts, and clothe them in Canada Goose parkas? Not exactly, says Elena Mihaly, staff attorney at the Conservation Law Foundation. She worked on a 2017 report on climate change’s effect on wastewater treatment systems that laid out some possible solutions to this poopy problem.

One method is to reform the way septic systems are regulated so that new systems are evaluated for their susceptibility to climate change before they’re put in. Researchers are already mapping out areas with infrastructure that’s vulnerable to groundwater level rise in coming years in states like New Hampshire. When it comes to existing septic systems, Mihaly says inspecting them when houses change hands at point of sale is a “way to make sure that we’re checking in on how infrastructure is doing given current risk, and how it’s changed from 30 or 40 years ago.”

And there are other practices that can head off this problem, too. Shallower leach fields, for example, rely on a narrower depth to treat water. Municipalities can install town-wide sewer systems in areas where household septic tanks don’t make sense. Frequent inspections are key, too. “It’s important to get your septic system inspected every three or four years,” Mihaly said. “Not only looking at all the pieces on the outside but at what’s happening with the groundwater that is flowing near it.”

Most importantly, it’s crucial to understand that groundwater doesn’t act in predictable ways, and it can impact more than just septic systems. “It’s not a given that if you have 3 feet of sea-level rise you’ll always have this much groundwater rise inland,” Mihaly said. “It’s really dependent on the underlying geology of that area, so it’s going to be very location-specific.” Roads, drinking water wells, landfills, and other infrastructure are susceptible to rising groundwater, too. “We actually have infrastructure that’s inland that we need to be thinking about as well in terms of reliability and functionality in the face of climate change,” she said.

You hear that, America? Climate change is coming for our conveniences. It’s time to get potty trained.