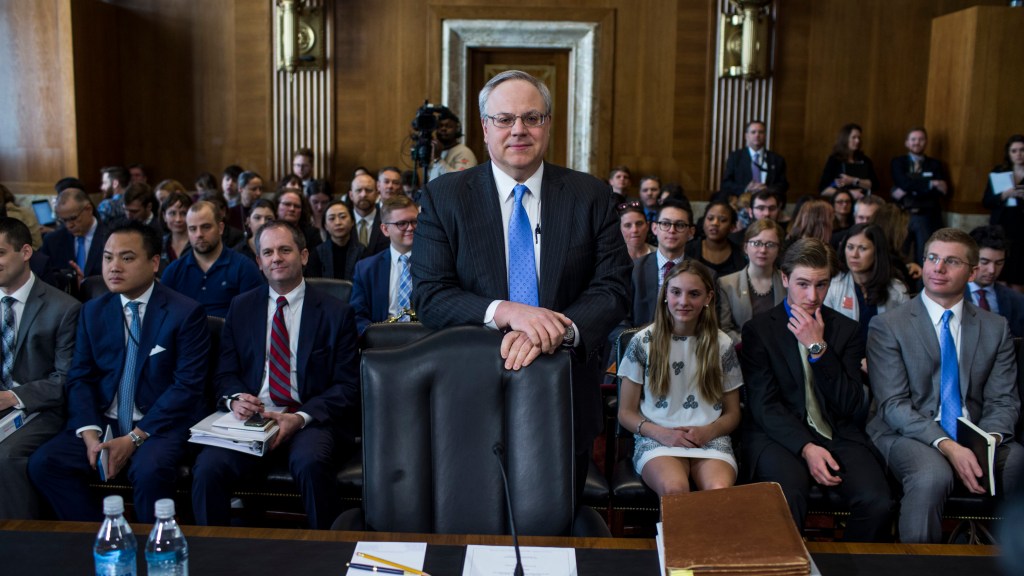 The acting head of the Interior Department David Bernhardt says he has to carry a small card around to remind himself of the list of his former clients he should avoid, but the former oil and gas lobbyist insists that he does not need to keep a detailed daily calendar. “I have no legal obligation to personally maintain a calendar,” Bernhardt wrote in a letter to Congress in late February. “Further, no Agency guidance exists recommending that I create or retain one. I have not personally maintained a calendar for years, and I have no intention of suddenly doing so now.”

The fight over Bernhardt’s calendars signals one of the bigger controversies ahead in his tenure after his likely confirmation as Interior secretary. Environmentalists have charged Bernhardt, and his predecessor Ryan Zinke, of politicizing Freedom of Information Act responses, omitting calendar entries, and even stretching the boundaries of the Federal Records Act.

“It worries me a lot that that’s not being followed,” House Natural Resources Chair Raúl Grijalva (a Democrat from Arizona) tells Mother Jones. The calendar “is the window into decision-making.”

Calendars of public officials can help reveal who is influencing the policy and provide some measure of accountability when certain special interests appear to have a particular hold over the decision-making. Scott Pruitt’s early calendars showed his close coordination with oil industry executives, for example, as his EPA decided to reverse regulations on methane emissions. It’s also become more common for officials to keep secret calendars.

Since Bernhardt was first confirmed as the deputy secretary in the summer of 2017, the public has had relatively few details about how he spends his days while running an agency responsible for a fifth of the nation’s landmass. Most of the calendars that Interior has made available lack descriptions about who he is meeting with and calling. Bernhardt has more than two-dozen former clients and a wider net of industry contacts from a career spent in the lobbying sector.

As I noted in my profile of Bernhardt:

Bernhardt’s understanding of the department’s workings and the allies he’s installed in key political posts enable him to steer its complex network of decentralized offices while leaving few fingerprints. His calendars often have little detail in them; the environmental group Western Values Project has noted how few of his emails turn up in their frequent Freedom of Information Act requests to the Interior. “Kind of amazing that he can do anything without leaving a paper trail behind him,” said Aaron Weiss, media director of Center for Western Priorities, another conservation group.

On the eve of David Bernhardt’s Senate confirmation hearing on Thursday to lead the Department of the Interior, the House Natural Resources staff had 27,000 pages of internal documents that it had not yet processed or examined. Interior sent over the batch earlier this week in response to the committee’s repeated requests for more communications surrounding the acting secretary’s activities and decision-making, in an attempt to tease out how much of it has been influenced by his prior relationship with oil, gas, and mining industries.

“That’s a good example of what’s been a pattern under Zinke and now under Bernhardt, which is to basically to make it very difficult for people to get information.”

On Wednesday, Grijalva told Mother Jones that his staff is investigating the question of whether Bernhardt has circumvented maintaining an ongoing record of his day-to-day activities by relying on a Google Doc calendar for his detailed schedule that is overwritten each day. The matter is concerning for the chair because it raises questions about whether Interior is breaking a federal records law in deleting his daily schedule and claiming it falls outside FOIA’s purview.

House Oversight Chair Elijah Cummings (a Democrat from Maryland) pressed the question in a hearing earlier with an acting deputy FOIA director earlier this month.

“Is the calendar for the acting Secretary deleted at the end of each day, do you know that?” he asked. The deputy FOIA director, Rachel Spector, replied she didn’t, but acknowledged “that the solicitor’s office in the department is working with the records officer in the department to determine what’s occurred there, and whether it’s consistent.”

Interior’s political appointees have exerted more control over the FOIA process in recent months. At the end of 2018, a political appointee who is a former Charles and David Koch adviser took charge of responding to and fielding requests. Then, at a House Natural Resources budget hearing on Wednesday, Grijalva pointed to a March 14 email from a senior Interior official, whose name was redacted, asking that “any correspondence being sent to any Senator as well as Representative Grijalva NOT be sent until you have further direction.” Grijalva noted the timing of the instructions was significant: The next day the Senate Energy and Natural Resources committee publicly announced Bernhardt’s confirmation hearing date.

Democratic senators plan to ask Bernhardt directly about his calendars in the Thursday hearing. Nonetheless, very little still stands in the way of his confirmation in the GOP-controlled chamber, after which Bernhardt will certainly face more questions from the Democratic House.