Elizabeth Warren wants green trade deals. What does that mean? 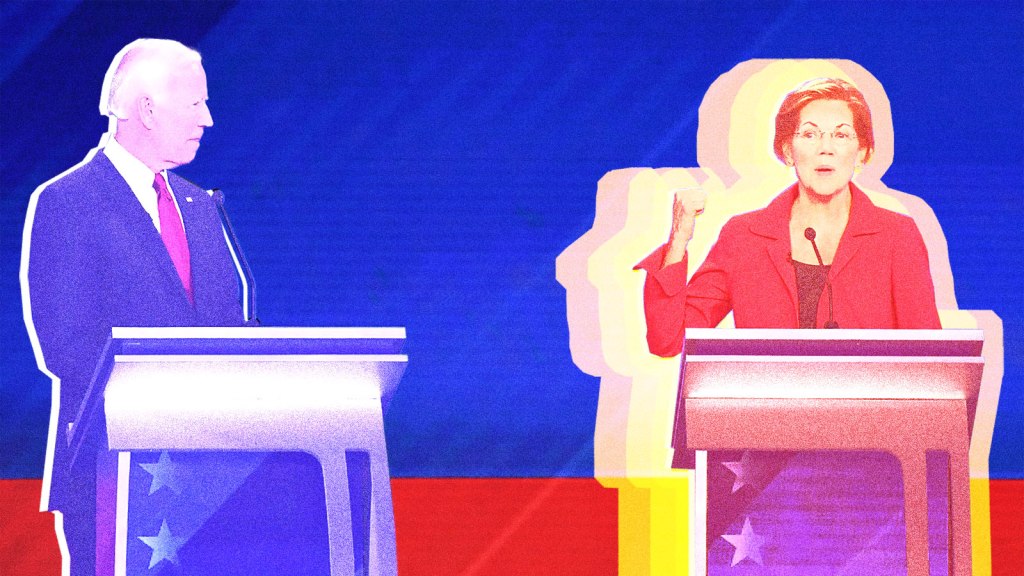 Elizabeth Warren wants green trade deals. What does that mean?

There has never been meaningful environmental language baked into a U.S. trade deal. This includes the “NAFTA 2.0” deal that Trump negotiated with Canada and Mexico and that is currently pending in Congress, which, by design, doesn’t include the words “climate change” at all.

Warren is promising to change that. “America should lead global efforts to combat climate change, and trade policy is a crucial tool for promoting international cooperation,” Warren’s campaign told Grist via email. “In my administration, representatives from environmental groups will serve on key advisory committees so that they participate in negotiations and help shape trade agreements.”

A seat at which table?

Environmentalists do want a seat at the table, but it matters which table, and whether they’ll be treated as equal partners in the room. Sierra Club trade program director Ben Beachy pointed out that during negotiations on the Trans-Pacific Partnership, or TPP (formed by Obama but scrapped by President Trump), the energy committee had representatives from Chevron, Haliburton, and the National Mining Association, but not one environmentalist.

“When you say bring us to the table, we don’t want to be tokens,” said Charlie Cray, a political and business strategist at Greenpeace U.S. “It’s not enough to have environmentalists alongside lobbyists.”

What advocates want instead, they say, is for many environmental representatives to have a significant presence on specific committees. The energy committee, for instance, is often packed with fossil fuel reps, Beachy said. “I’m not focused on simply swapping out Chevron and inserting Sierra Club,” he said. Adding just one environmental expert to the mix is not enough; there needs to be a bloc of environmental experts with a say in the most relevant negotiations.

Another priority for environmentalists is eliminating investor-state dispute settlements, referred to as ISDS by those in the biz.

ISDS is a mechanism included in many trade and investment agreements to, well, settle disputes. Under trade deals that include investor-state dispute mechanisms, a company from one signatory state that is investing in another signatory state can argue that new laws or regulations could negatively affect its expected profits or investment potential, and sue for compensation. The hearing is held before private tribunal, rather than a public court, and the details of the arbitration are kept sealed. And the system only provides for foreign companies to sue countries, not the other way around.

Environmentalists and labor advocates say that ISDS essentially gives corporations the power to bully countries into not passing environmental or worker protections that might interfere with the terms of an international trade deal, or even bully them into repealing existing legislation.

“If a corporation didn’t like something about some domestic policy in another country that was a member of this trade deal, they could go to this dispute tribunal and this kangaroo court would just decide whether or not this domestic policy was in line with this trade agreement,” said Kyle Ash, director of government affairs at the Physicians Committee for Responsible Medicine and former senior legislative counsel at Greenpeace. And then, he added, “there is no recourse for citizens in that country that may have pushed for that policy to happen through the democratic process.”

Some nations have taken steps to free themselves from investor-state dispute settlements: South Africa and Indonesia have allowed trade agreements containing investor disputes to expire, and others, such as Ecuador and Venezuela, have withdrawn from the World Bank’s convention on settlement disputes. Environmentalists are hoping that under a progressive president, the U.S. would similarly walk away from ISDS.

Currently, trade negotiators typically discuss the details of agreements in secret while negotiations are ongoing, only revealing their handiwork when a draft of the deal is finalized. Even then, however, the length and density of trade agreement language means that only trade lawyers and industry specialists can easily interpret how a particular deal will affect ordinary citizens. And the public has no idea what went on at the negotiating table to get to the terms that end up in the draft.

Advocates point out that transparency is an essential part of the process of forming and passing domestic legislation that allows citizens to have a voice in the process and hold their elected officials accountable. Yet somehow when it comes to trade policy, which is far-reaching in its impact, the public is left out.

“Trade impacts everything: from the air we breathe, to the safety of our food, to the security of our jobs, and we’re willing to just cede control to a shady room of corporate polluters to negotiate and put forward their priorities,” said Beachy. “We really do need to have a not only transparent, but participatory process, just like we aspire to do for massive legislation.”

Critics say that making trade negotiations transparent would be chaotic and politically impractical. “What government would offer a politically sensitive concession knowing that it would immediately be made public?” asked the Council on Foreign Relations in a position paper.

But Beachy thinks that more transparency would inherently lead to more environmentally friendly trade deals. “I read ‘politically sensitive concession’ as code for, ‘we sold you out.’ Of course if we had a trade deal that had really weak environmental standards and allowed corporations to keep outsourcing pollution and jobs to countries with lower standards, people would get very peeved about that, and rightly so,” he said.

Working within the status quo

Under the status quo, activists’ only chance of influencing or stopping climate-unfriendly trade deals is after they’ve been negotiated. For instance, the Trump administration is currently hoping that Congress will ratify Trump’s renegotiated version of NAFTA. In addition to not mentioning climate change, the current draft of the deal allows oil and gas companies to outsource pollution and sue states over trade disputes.

A group of 110 members of the House of Representatives wrote an open letter to President Trump earlier this month, demanding language upholding and enforcing the Paris Agreement be added into the terms. Until climate provisions are included, like language enforcing the Paris agreement, they won’t let it pass the House, they said. And environmental groups like Greenpeace and Sierra Club are organizing informational campaigns to raise awareness about trade, urging supporters to call their congresspeople and write letters to the editor in their local papers.

Advocates imagine a world in which environmentalists outnumber fossil fuel representatives on trade committees, investor-state dispute settlements are a relic of the past, and all trade negotiations take place out in the open. But for now, forcing NAFTA 2.0 negotiators to return to the table is the only conceivable way to get environmental guidelines into the trade policy and safeguard the future, say advocates. And so that’s what they’re going to try to do.

“You don’t get too many shots to rewrite trade deals. It’s kind of a once in a generation thing, said Beachy. “We know we cannot afford another long-lasting unfair trade deal that is on the wrong side of our historic fight to tackle the climate crisis.”