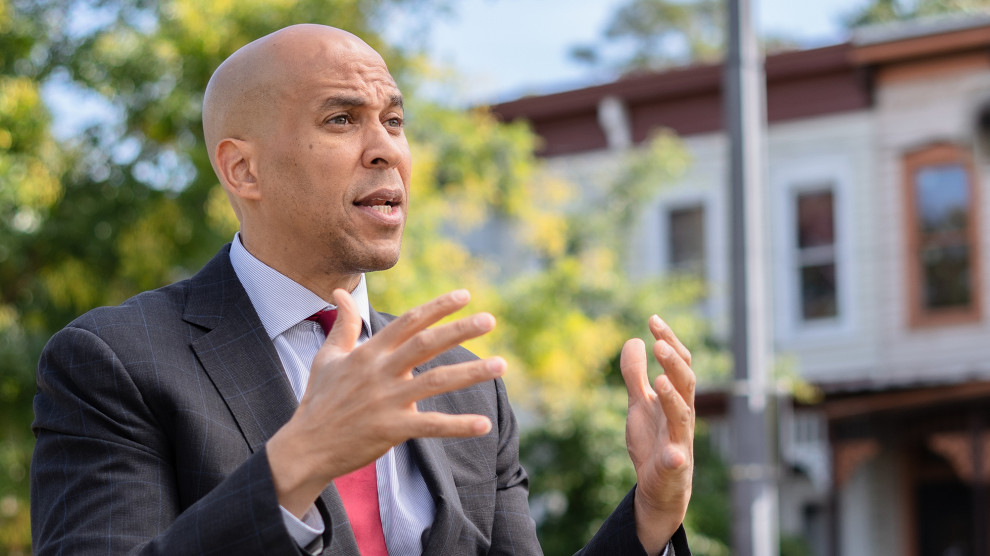 Among the 2020 presidential candidates, Cory Booker stands out for his record of advocating for the people who bear the brunt of pollution and toxic waste. Before his presidential run, he traveled to Louisiana, North Carolina, and Alabama to inform a sweeping bill that codifies the federal government’s requirement to incorporate the interests of communities of color in environmental regulation.And as the mayor of Newark, Booker tackled the city’s lead water crisis and industrial pollution.

Booker is also one of the few presidential contenders to embrace nuclear energy openly—his $3 trillion plan to address the climate crisis includes $20 billion in research and development of nuclear technology. This is one major difference between Booker and his opponent Bernie Sanders, who has called nuclear power a “false solution” and actually phases it out in his climate plan.

The candidate sat down with Climate Desk (of which Grist is a founding member) in Anacostia, Washington, D.C., for an exclusive interview a day before the climate strikes taking place around the world. As part of the wide-ranging conversation about climate change, he explained how he squares his support for nuclear power with his passion for cleaning up pollution in disadvantaged communities.

“I didn’t come to the United States Senate as a big nuclear guy,” Booker told Grist on Thursday, “but when I started looking at the urgency of climate change, I saw that over 50 percent of our non-carbon-producing power right now comes from nuclear.”

“Nuclear has to be a part of the blend,” Booker added. “And to say it’s not, to say you’re going to get rid of nuclear, really you are handicapping undermining our ability to get to the ambitious goals we must have.”

Booker also supports a fee or tax on carbon pollution that would be used in part to fund clean energy and efficiency investments. (South Bend Mayor Pete Buttigieg is also in favor of price on carbon, and explained his plan to Climate Desk this week.) “I don’t think there’s any pathway to get to where we need to go without putting some kind of price on carbon,” said. “A lot of people say, ‘well gas is so cheap right now.’ Yeah, it’s cheap because [the price] does not include the full cost to humanity.”

Booker’s support for nuclear power and a carbon fee has tempered any praise from the Climate Justice Alliance, a network that fears these policies would hurt more than help affected communities. Indeed, critics of a carbon tax worry that it would be regressive, hurting the poor more than the rich. But Booker argues that rebates and investments in poor communities could help solve that problem. And while historically, nuclear power companies have built their plants—and dumped the waste—in poor communities of color, Booker believes it doesn’t have to be that way: He points to agreements struck between local and national governments in Canada and Europe as a model for a “community process to deal with the waste.”

“Nuclear has proven to be one of the safest ways to advance carbon neutrality,” he said. “Even if it means that we have to phase off it in the future, the real pressing challenge right now the threat to our health and our safety and our well-being is climate change and that needs to be our driving focus.”