Florida has it all: Hurricanes, toxic algae, and stifling heat 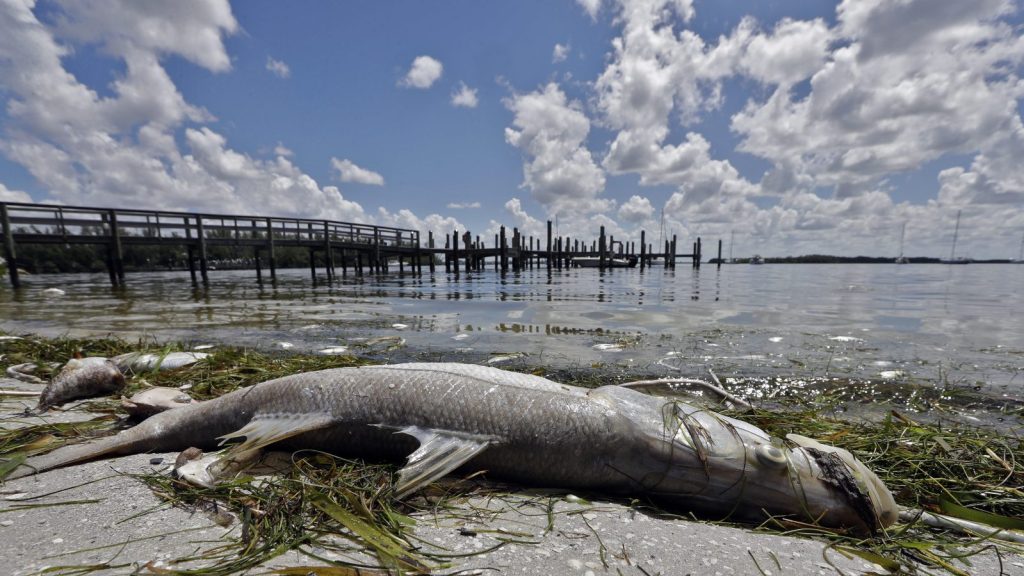 We lost another one to the red tide. RIP, poor fish. AP Photo / Chris O'Meara
future of humidkind

Florida has it all: Hurricanes, toxic algae, and stifling heat

The hurricane built strength over the Gulf of Mexico’s unusually warm waters before hitting the Panhandle region on Wednesday with powerful winds, flattening homes and knocking out electricity for hundreds of thousands of people. Early reports show that in some areas, Michael brought the red tide closer to shore, but the jury’s still out on whether the storm made the algae situation better or worse.

The Sunshine State had never seen a red tide this bad, nor had it seen a hurricane quite like Michael, the strongest October storm ever recorded to make landfall in the continental U.S. Miami meteorologist John Morales joked that Florida has become the “RecordsRUs” for climate change.

Hurricanes, toxic algae, sea-level rise, and stifling heat: Florida has it all, and not in a good way. The state is a humid microcosm for what ails us. If you want a glimpse of the future, toss that Magic 8 ball — it’s useless anyway — and shift your gaze to the Sunshine State. One advisory firm, Four Twenty Seven, named Florida’s cities among the most exposed to climate change in the country.

Among the lower 48 states, Florida’s real estate is the most at risk for chronic flooding over the next 30 years. On both sides of the peninsula, the sea is rising about an inch a decade as the land surface sinks. Not a good combo. Scientists predict that much of South Florida could be underwater within the century.

And don’t forget the Miami Heat. Florida is home to 10 of the 25 hottest major cities in the United States. The Florida peninsula has already warmed 1 degree F over the last century, and it’s set to get toastier. The EPA predicted that 70 years from now, Florida could see 45-90 days above 95 degrees F. Today, the state sees fewer than 15 days that hot a year.

Yes, warmer waters tend to breed stronger storms and bigger algae blooms like the ones Florida has seen recently, not to mention that they endanger the state’s precious coral reefs.

“Wait,” you’re saying. “What about wildfires?” Oh, clever reader, you know your climate change! Sadly, even with crazy humidity and water on almost every side, Florida isn’t immune. Wildfires can be devastating there, too, as we found out last year when flames tore through 20,000 acres across the entire state.

It’s not just a string of bad luck. These misfortunes are a sign that climate change is here, and it’s coming for all of us — but especially Florida.