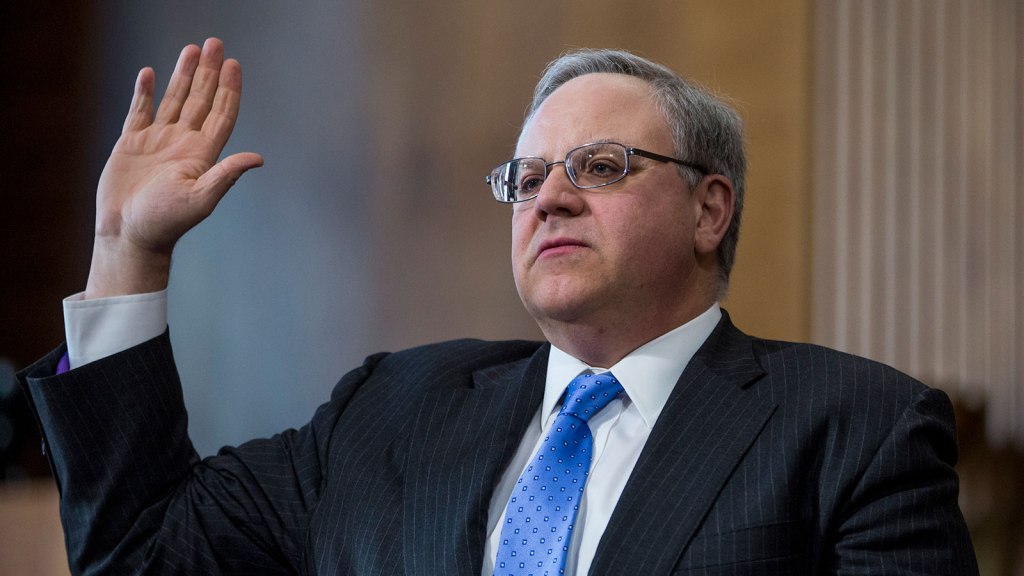 “I believe Mr. Bernhardt is clearly qualified to serve as secretary,” Manchin, the top Democrat of the Senate committee that oversees the Interior, said during a floor speech. “He knows the Interior Department inside and out and he is well versed on all the issues that come before it.”

The reason Bernhardt knows the department so well? He’s been serving as acting Interior secretary since January when Ryan Zinke, the department’s former head, resigned amid ethics investigations.

Bernhardt’s work as a longtime lobbyist for the oil and gas industry has led to concerns about conflicts of interest. To keep track of all of his recusals for former clients, he carries with him a card listing all of their names, the Washington Post reports. The Interior is entrusted with some 700 million acres of public lands and 1.7 billion acres off the country’s shores, and as the head of the department, there is a high chance that Bernhardt will oversee businesses he once lobbied for.

Once again, these are not normal times. Senate Republicans are forcing through the nomination of David Bernhardt to serve as Sec of @Interior. He has so many conflicts of interests, he carries a list in his pocket to remind himself what they are. https://t.co/fLR7ktXI6U

While Republicans rejoiced the moment, Senator Chuck Schumer, a Democrat from New York, was outraged. “Donald Trump campaigns on cleaning up the swamp and he does exactly the opposite when in office. An oil and gas lobbyist as head of the Department of Interior? My God,” Schumer said during floor remarks on Wednesday. “That’s an example of the swampiness of Washington if there ever was one.”

As @realDonaldTrump's pick to lead @Interior, it's hard to imagine someone whose background is more at odds with protecting public lands https://t.co/WsJWQrBTLX

Speaking of swamps, environmental activists are not having it. Remember the viral video of the “swamp creature” seated behind Bernhardt during one of his confirmation hearings? That was Greenpeace activist Irene Kim, who put on the mask in protest as Bernhardt fielded questions from senators about his previous lobbying.

“David Bernhardt’s ties to Big Oil — the very industry he is tasked w/ regulating — are as deep as an oil well,” Senator Ed Markey, a Democrat from Massachusetts and cosponsor of the Green New Deal, wrote in a tweet. “Those ties should be disqualifying for anyone nominated to head the Interior. We must stop the pollution of our democracy by Big Oil interests.”