Do marches convince bystanders to join a movement, or do they push them away? Sure, if you go out into the street waving a sign that says “There is no Planet B,” it feels like you’re doing something good. But some research has suggested that you’re not bringing anybody around to your cause; in fact, loud public protests could easily backfire.

“Unfortunately, the very nature of activism leads to negative stereotyping,” wrote the authors of one study from 2013. Shouting “no blood for oil” or throwing fake blood on fur coats gets you “associated with hostile militancy and unconventionality or eccentricity.” So, uh, not great for building a mass movement.

But now there’s good news for protesters — at least those championing the environment. A new study published in the journal Frontiers in Education found that climate marches can not only boost activists’ likability, but also encourage bystanders to think we all can work together to take on the climate crisis.

Researchers surveyed nearly 600 “bystanders” before and after the March for Science and People’s Climate March, which took place one week apart in 2017. The study’s participants didn’t attend the marches, but many had heard about them through the media.

After the marches, people of different political persuasions saw the protesters as “less arrogant, less whiny, and less eccentric,” said Janet Swim, an author of the study and a professor of psychology at Penn State.

To understand the role liberal and conservative media played in swaying opinions, participants were also asked where they got their news. As you’d suspect, those who heard about the marches from liberal-leaning media sources saw the marchers in a more favorable light.

Perhaps surprisingly, people who got their news from conservative media developed stronger beliefs in collective efficacy — the idea that we can tackle climate change together.

That could be because people who watched conservative news simply didn’t know about the march before it happened, Swim said. And what better way to convince someone that we can work on climate change collectively than showing a giant group of people … coming together to protest the climate crisis.

Marches leverage our built-in tendency to follow the crowd. “The more people who are involved, the more important your message tends to seem,” Swim said.

And that sense of importance could help spur action. Marches have two main goals: inspiring other people to join your movement and getting governments to act.

So why did previous studies suggest that protests were unhelpful in convincing the general public? Swim said it might be because those studies “looked at more aggressive protests.” In contrast, bystanders might have been more sympathetic to the marchers in 2017, because many of the participants weren’t necessarily activists. The strategy behind the Peoples Climate March, after all, was to broaden the movement beyond the usual suspects. Less Sierra Club or 350.org, more pastors and union workers.

“If you were a bystander in 2017, if you were looking at the march, you’d see people of faith, labor unions, people of color, and frontline communities,” said Paul Getsos, national director of the Peoples Climate Movement and the lead organizer for the march in 2017. “It wasn’t your typical kind of activist march.” 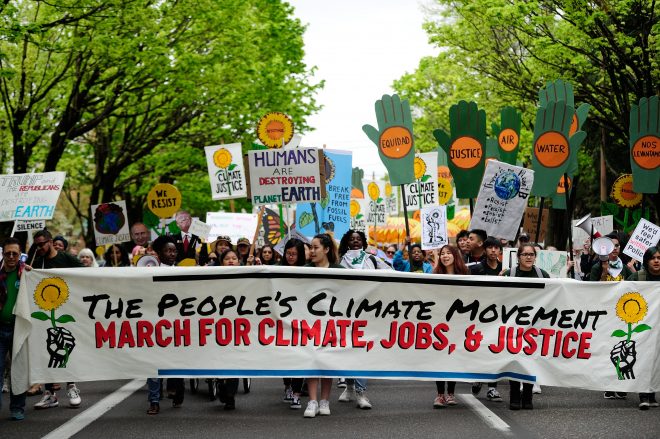 This kind of mass mobilization “counters the narrative that no one cares about climate change,” he said. “If we were just mobilizing the usual activist base, I know for a fact it wouldn’t have had the same impact.”

But does that impact last? Many worry that protests risk being one-off events and failing to inspire long-lasting political momentum. Consider this line Michael White wrote for the Guardian before the Women’s March in 2017: “Without a clear path from march to power, the protest is destined to be an ineffective feelgood spectacle adorned with pink pussy hats.”

“To anyone who actually attended the event, the proposition that it was some casually undertaken dilettante party about hats was nuts,” writes Rebecca Traister in the book Good and Mad: The Revolutionary Power of Women’s Anger. She argues that thousands of women attended political trainings after the march, learning how to run for office or fight for better health care.

Similarly, the week leading up to the People’s Climate March in 2017 was filled with teach-ins, trainings, fundraisers, and lobbying sessions. That march in particular, which focused on climate change in terms of jobs and economic investment, helped lay the groundwork for the Green New Deal, according to Getsos. “It strengthened the resolve of environmental orgs, labor unions, and communities of color to learn how to work together,” he said.

To be sure, the recent Youth Climate Strike, in which hundreds of thousands of students walked out of class to protest government inaction on climate change, has been met with condescension. U.K. Prime Minister Theresa May, for example, said the disruption “increases teachers’ workloads and wastes lesson time.”

Isabella Johnson, the lead organizer for Illinois with this year’s Youth Climate Strike, told the Chicago Tribune that some of her classmates had questioned her activism, either because they didn’t think climate change was important or because they were skeptical protests could make a difference.

“Sometimes, that just shows they feel threatened, and it proves to me that they are actually paying attention to what we’re doing,” Johnson said. “The fact that they are getting upset shows that they are listening to what I’m saying and it brings the issue into their minds.”