Not so long ago, a march for climate action would struggle to draw crowds into the streets. Stop the war? Sure. Rally to curb CO2 emissions? I think I’m busy that day.

But pro-environment protests surged under President Obama, as the fossil-fuel divestment movement spread on college campuses and tens of thousands demonstrated to stop the Keystone XL pipeline. Then came the People’s Climate March in 2014, when hundreds of thousands packed the streets of New York City.

It was the largest climate march in history, and parallel protests on the same day brought out hundreds of thousands more around the world, from Europe to Australia to Brazil. Suddenly, it became clear that climate concerns had the power to move millions.

This April 29, organizers will try to pull it off again with another People’s Climate March in Washington, D.C. But this time, the political scene is wildly different. President Donald Trump has launched a sweeping assault on environmental regulations, but he’s also targeted undocumented immigrants, transgender rights, public health, and much more. Seemingly every progressive cause is under threat.

Grist spoke with several organizers of the upcoming climate march to hear how they’re preparing, as well as to scholars of social movements to find out how this event fits into larger movements for social change. The march could broaden the environmental movement and inspire more people to take up the cause, activists say. Or it could recede into memory as a noisy outpouring that leads nowhere.

Here are some of the biggest challenges organizers face:

Challenge #1: So much to protest

The day after Trump’s inauguration, Women’s Marches drew an estimated 4 million participants in big cities and small towns across the country. A week later, on Jan. 28, demonstrators flooded airports across the country to oppose Trump’s ban on refugees. In February, Trump’s rollback of Obama-era protections for trans children in school bathrooms prompted widespread rallies. In March, protesters turned out in D.C. to stand with the Standing Rock Sioux Tribe in their fight against the Dakota Access Pipeline. On Tax Day, demonstrators took to the streets to demand that Trump release his tax returns. 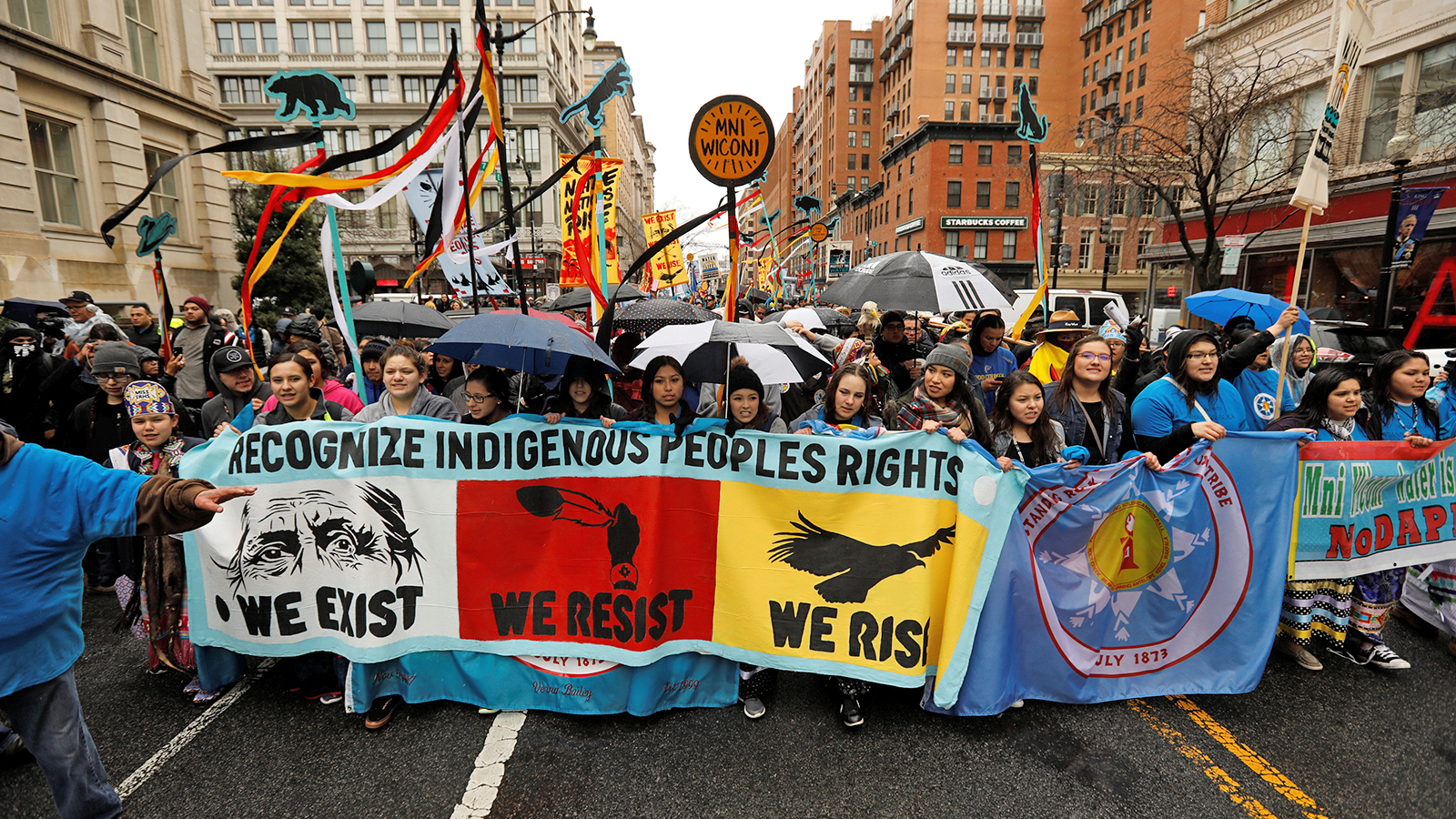 Demonstrators at the Rise with Standing Rock march. REUTERS/Kevin Lamarque

Progressives have a lot of reasons to protest. And this spring, they’ve had a lot of chances to do it.

Last Saturday, all types of -ologists took to the streets in 600 cities around the world, including Washington, to March for Science — a week ahead of the People’s Climate March. Later this spring, we’ll also see an immigrants march and an LGBT pride march in Washington. (Even the Juggalos plan on rallying in D.C. come September.)

Climate organizers say they want all these marches to work together to confront a president whose policies threaten what progressives hold dear. Add them up, and they could give the impression of a swelling resistance to Trump’s policies, which may prove more effective than any individual march.

But the sheer number of events means each protest risks getting lost in the crowd.

“What activists fear is that the efforts will become divided, because who will come to D.C. to march every weekend?” says David S. Meyer, a sociologist at University of California, Irvine, who studies protest movements. “The [march] on climate change, why is that a separate march from the science march, you know?”

So why were the March for Science and the People’s Climate March planned for back-to-back weekends? The short answer is that the organizers behind the science march wanted to go their own way.

Well before Trump was elected, climate activists had been planning to hold the People’s Climate March around the 100th day of the new president’s term. The point is not just to demonstrate for action on climate change, but also for “jobs and justice.” The platform calls for a $15 minimum wage and help for workers so that they can adapt to a new, clean energy economy.

In late January, the same week these organizers announced the date for the People’s Climate March, scientists chatting on Reddit quickly spun their discontent with the new administration into plans for a March for Science, which they scheduled for Earth Day, April 22. It was a call to base government policy on evidence — including climate policy — and to support scientific research. 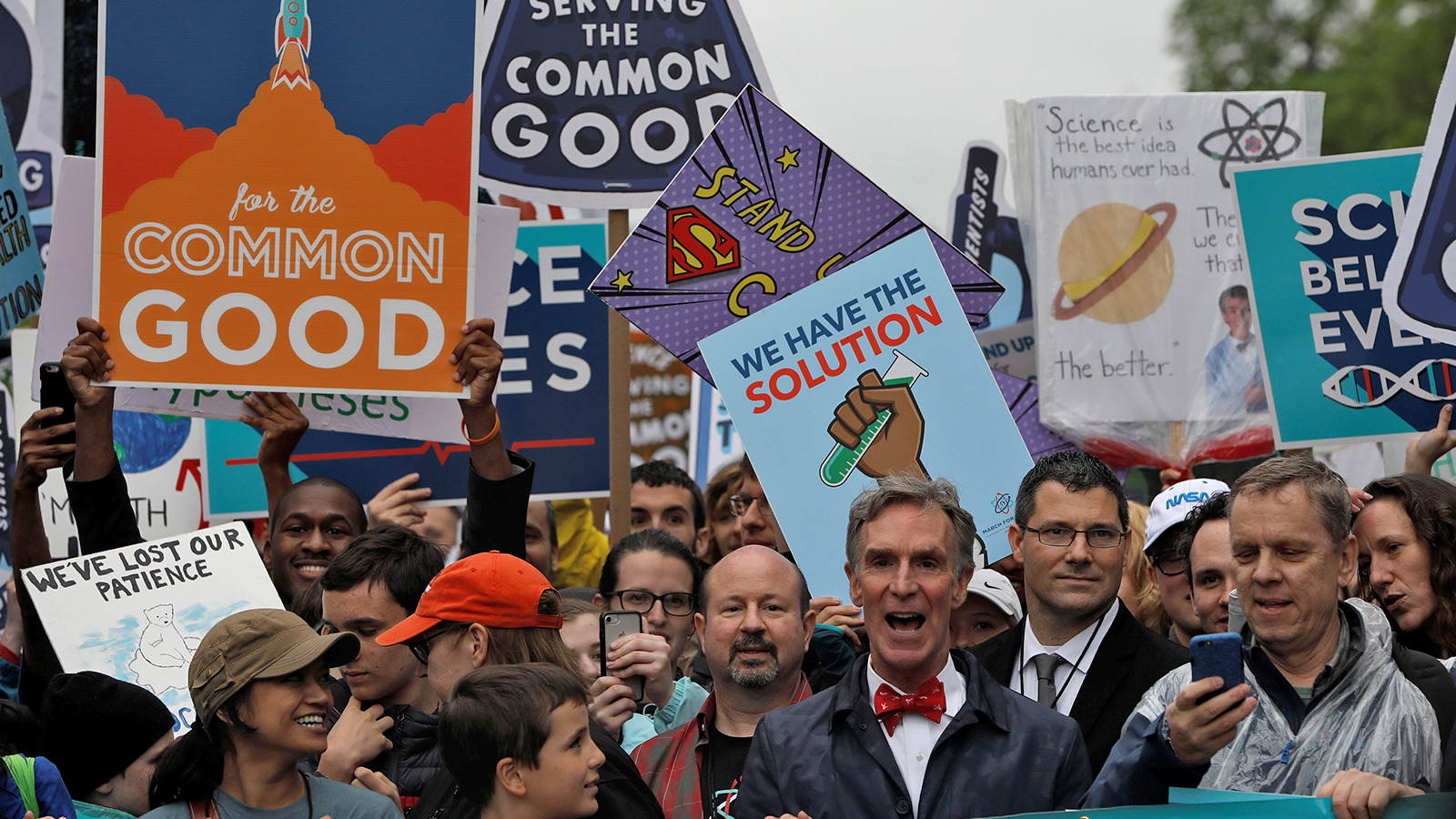 The science guy at the March for Science. REUTERS/Aaron P. Bernstein

Environmental organizations have also been calling on supporters to come out for both. “What the science march has to say is certainly compatible and complementary to the People’s Climate March — but it’s not the same,” says Angela Anderson, director of the climate and energy program at the Union of Concerned Scientists, a group connected to both demonstrations.

The group 350.org, a key player in organizing the climate marches in 2014 and this year, praised the rallying scientists and characterized the March for Science as “a momentous beginning to a week of action.”

Some might worry that back-to-back marches could splinter the movement and sap its strength, leading to a lower turnout for each. But climate activists insist they’re not fretting about burnout.

Challenge #3: Building a broader base

Climate activists have likened the resistance to Trump’s policies to the civil rights struggles of the 1950s and ’60s. What’s underway now, they say, could turn out to be just as consequential.

“Climate change is our lunch-counter moment for the 21st century,” says Rev. Lennox Yearwood Jr. of the Hip Hop Caucus, a group involved in organizing this year’s climate march, says. “In the civil rights movement where they were dealing with Selma and Montgomery, we’re dealing with physics.” 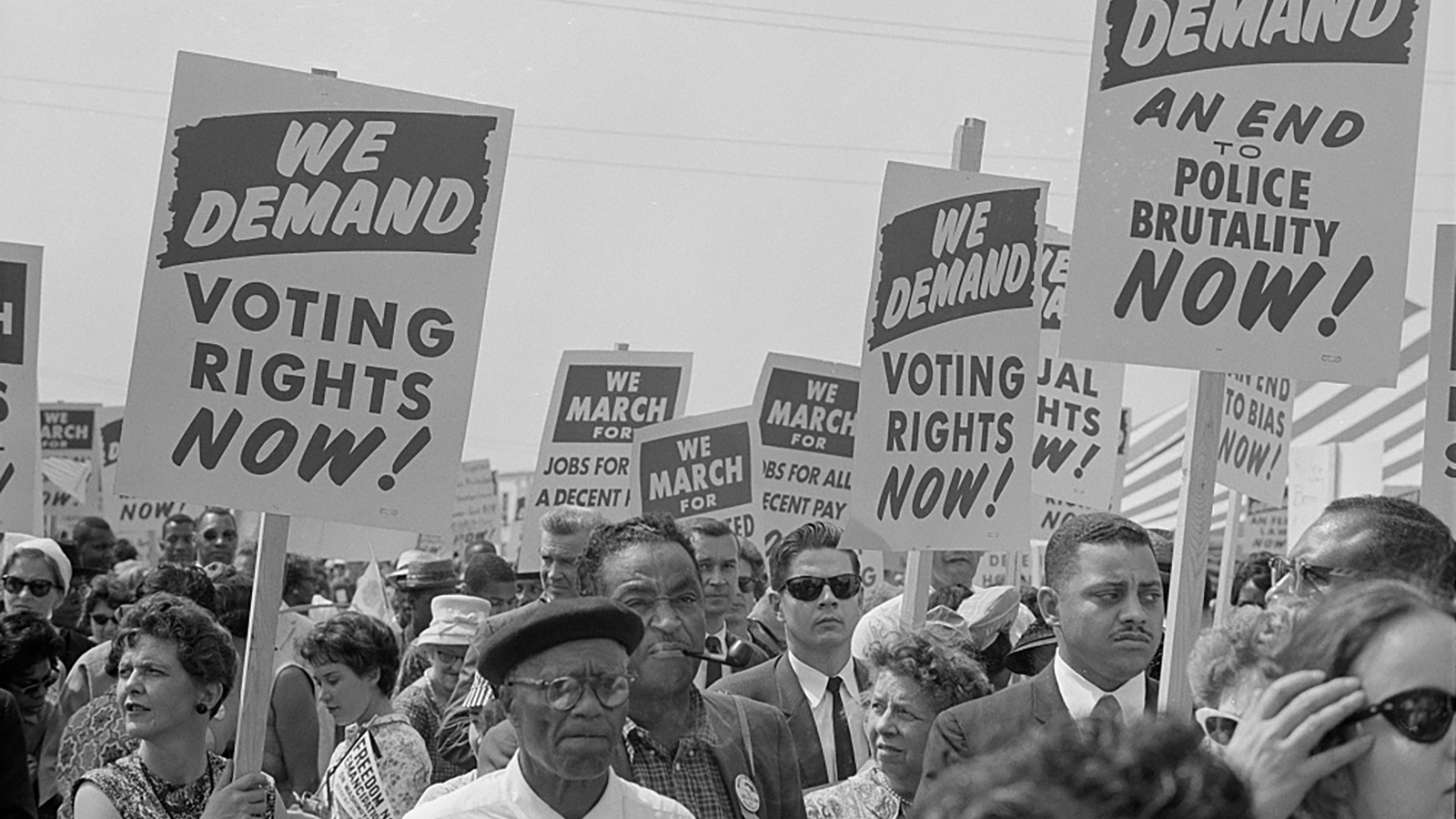 Demonstrators at the 1963 March on Washington. Library of Congress

In February, a coalition of nearly 100 environmental, labor, civil rights, and religious groups came together in Washington to hash out details for the climate march. The aim was to incorporate a diverse array of voices into the march right from the start, to make sure it wasn’t just old-school green groups (and their largely white members) participating.

Erica Chenoweth, an expert on nonviolent civic action at the University of Denver, says building trust in a coalition is the first step in creating a united movement. Environmental organizations have struggled to engage marginalized groups in the past, but in recent years have focused on partnering with and listening to activists from other progressive groups and communities of color.

“To be frank, this has been a very Birkenstock kind of movement for a very long time from a leadership perspective,” says Yearwood. Mainstream green groups, he says, are now keen on including a wider array of voices and concerns with the help of social justice groups.

Organizers say the climate movement grows stronger when it’s connected to other progressive causes. The fight against the Dakota Access Pipeline, for instance, became much more powerful when it grew into a larger demonstration of Native Americans demanding recognition of their tribal sovereignty and right to say which projects are built on their ancestral lands. And the push for clean energy draws broader support when it’s linked to the push for more jobs that pay a living wage.

”We have to respond to all of the attacks, and not just the attacks on climate,” says Getsos. “Our struggles are interconnected.”

The march’s roster of partners reflects this focus. Organizations like GreenLatinos, the Indigenous Environmental Network, and GreenFaith combine work on climate change with work on immigration, tribal sovereignty, and religion.

Embracing an “intersectional” outlook — a recognition that climate change and other problems affect different groups in overlapping ways — is what scholars say could make or break the movement. But creating cohesion can take time, especially when political grievances are so wide-ranging.

The payoff, Chenoweth says, is that diverse movements are more likely to get large-scale victories because they have more connections and draw larger crowds. In the 1960s, the civil rights movement drew support from union members, religious leaders, college students, and many others.

Challenge #4: Turning a march into a movement

Marching on Washington has long been seen as a way for a protest movement to spur political action. In 1913, thousands of women marched for the right to vote, a milestone in the campaign that eventually secured women’s suffrage with the 19th Amendment seven years later. The 1993 LGBT march helped build an activist network that won many protections over the years, leading up to the Supreme Court’s 2015 ruling establishing a right to same-sex marriage. 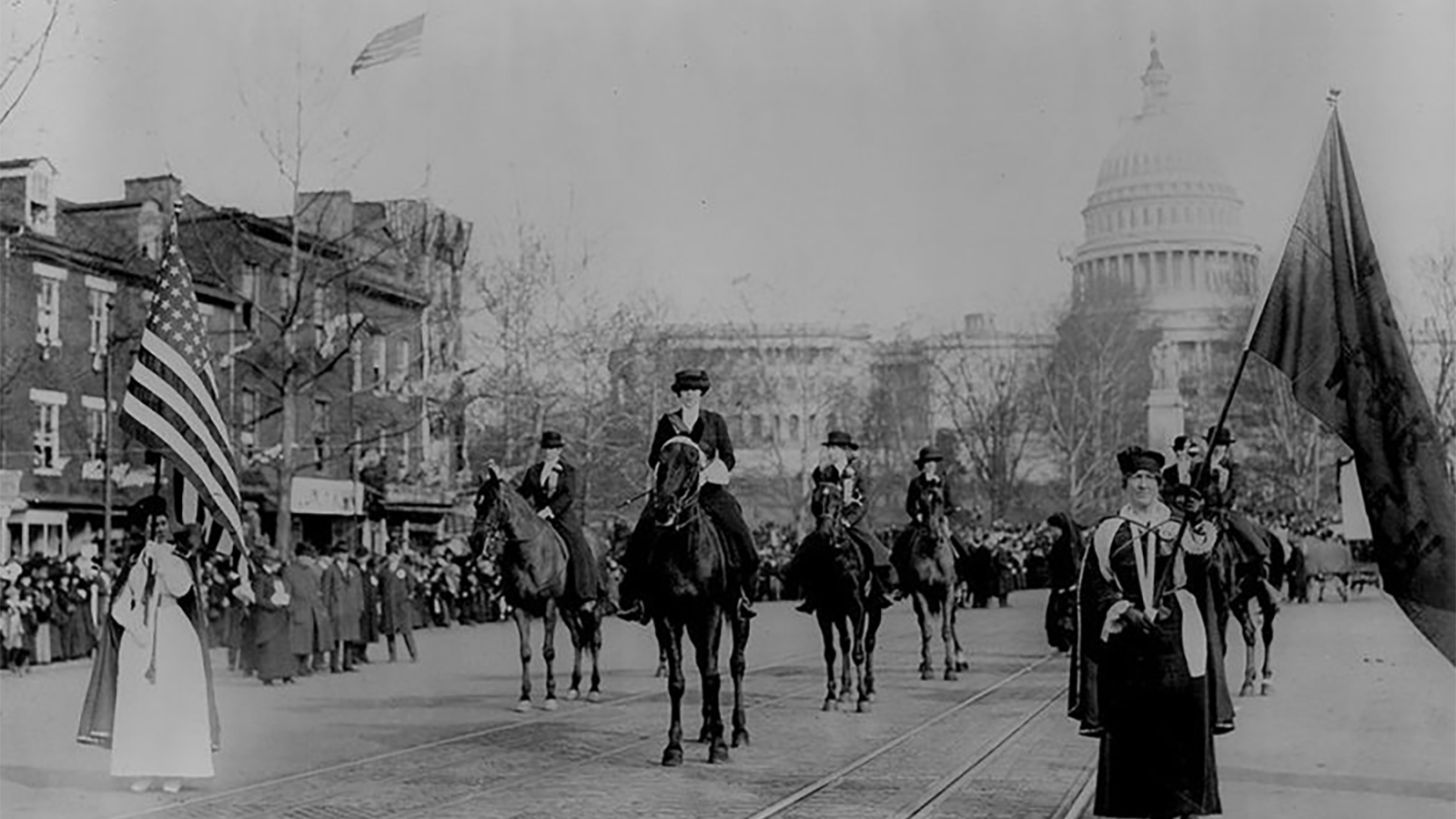 But climate activists seem to get the most inspiration from the March on Washington for Jobs and Freedom in 1963, which was capped off by Martin Luther King Jr.’s “I Have a Dream” speech. That demonstration, held in front of the Lincoln Memorial, captured the nation’s attention and paved the way for passage of the Civil Rights Act the following year.

“Clearly, the civil rights movement understood the power of marches,” Yearwood says. “Our parents in the 20th century primarily fought for equality. Those of us in the 21st century are fighting for existence.”

A single climate march — even one backed by a wide-ranging movement — won’t compel Trump, his cabinet, and the Republican majority in Congress to change their climate-denying ways, of course (though a massive turnout would surely bother Trump enough to tweet about it).

But there are other measures of success. Nancy Whittier, a sociologist at Smith College who studies social movements, says effective movements are characterized by an ability to “harness and channel all of this energy and fury” in a lasting way.

The climate march organizers believe they’ve laid the groundwork to do just that — to keep momentum rolling by turning anger over Trump’s policies into lasting activism.

They point out that the march is not a one-off event. The week of planned activities leading up to Saturday’s march includes teach-ins, trainings, fundraisers, and lobbying sessions. The day before the march will feature a youth convening to help young people develop skills in organizing, storytelling, and leadership.

The aim is to have marchers return home as organizers, energized and ready to push state and local governments to cut fossil-fuel use and promote clean energy. That way, even if Washington won’t listen, the demonstration will still lead to action.