Every December, dictionary editors hunt through all the words in our growing lexicon to pluck out the ones that best capture the spirit of the fading year.

The top choices from 2017 (feminism, complicit) neglected the environment. One dictionary editor at the time lamented the lack of new or revived words to describe our changing planet, though I managed to track down quite a few a year ago.

In 2018, the tables started to turn. Oxford Dictionaries picked toxic, a word that describes poisons in our air and water. Collins Dictionary chose single-use, a term for disposable plastic products “whose unchecked proliferation are blamed for damaging the environment.” And Dictionary.com’s misinformation, though it’s getting a lot of use in recent years, also captures the falsehoods spread about climate change.

The year now coming to a close was filled with environmental chaos. Wildfires ripped through the West, destroying towns and filling big cities with smoke. Hurricanes slammed into North Carolina and Florida. A slew of scientific reports warned us that the worst was yet to come; alas, the president still spouted climate denial on Twitter.

In a warming world rife with changes, it makes sense that our vocabulary shifted, too. Words took on new meanings (hothouse), obscure jargon launched into the news (bombogenesis), and brand-new terms were coined (smokestorm). We kept tabs and collected the ones that defined our planet in 2018. You won’t find these in any standard dictionary yet, but perhaps some will pop up in their pages soon.

Bombogenesis (n.) The process by which a cyclone rapidly intensifies as it experiences a drop in atmospheric pressure.

Nature didn’t waste any time with its New Year’s resolution to bring us terrible weather. January kicked off with a bomb cyclone, a winter storm that brought wicked-cold, blizzard conditions to the East Coast. That, in turn, introduced the masses to the obscure meteorological term bombogenesis. And thanks to climate change messing with our weather, you can expect more bitter nor’easters like this one soon. 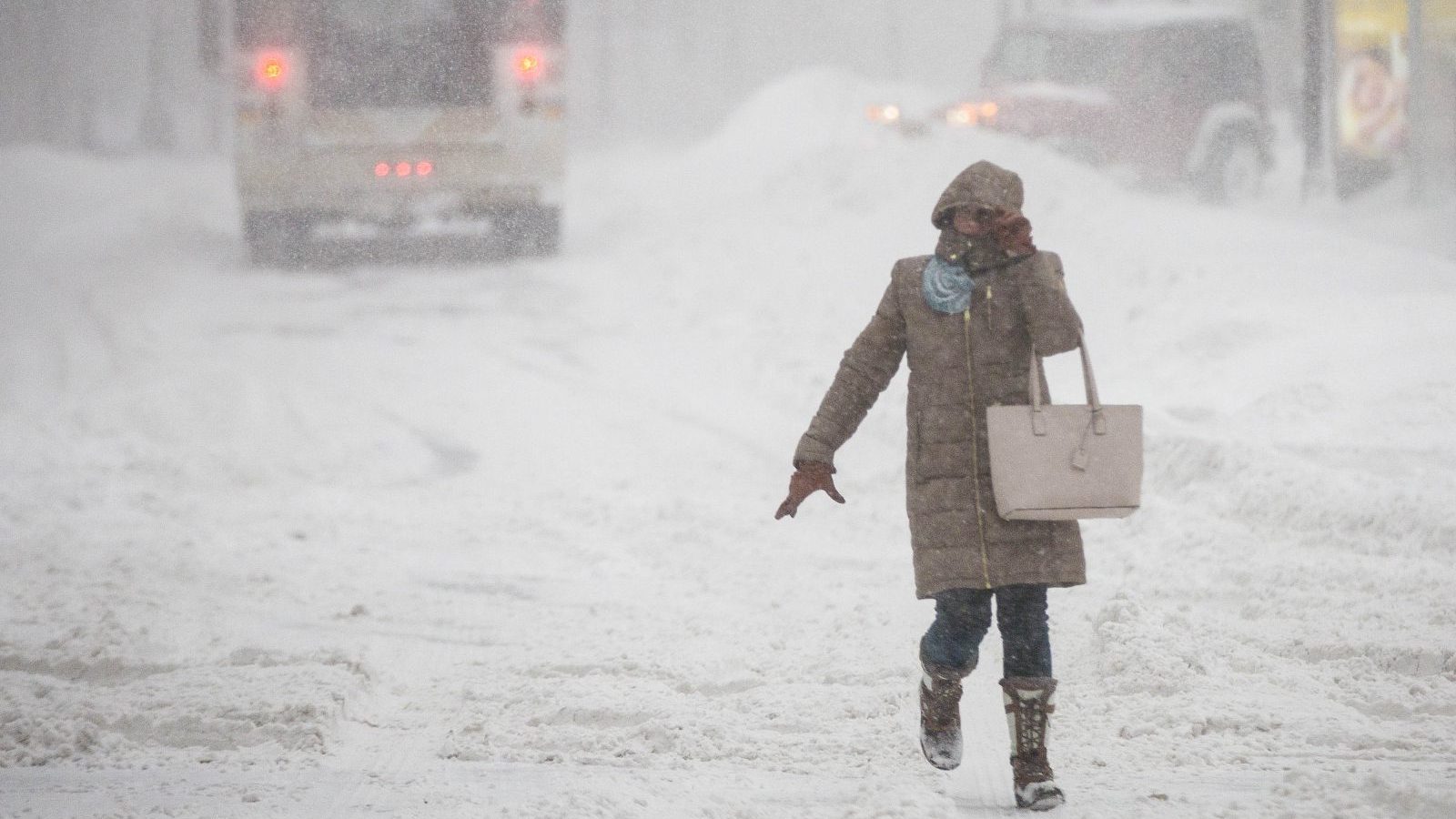 Carbon “fee” (n.) A price on fossil fuels to cut down on carbon dioxide emissions.

Not a carbon tax, exactly. A proposed carbon fee grabbed national attention this year with a ballot measure in Washington state. The backers of Initiative 1631 were adamant that it was a carbon fee. The difference between fee and tax? Revenue from a general tax goes toward whatever the legislature decides; a fee ensures that funds go straight to a designated purpose. Opponents called I-1631 a tax anyway, oil companies spent a record-breaking $31 million to sink it, and voters rejected the measure in November to the heartbreak of climate activists everywhere.

Cleanwashing (n.) The classification of polluting energy sources as “renewable.”

Tired: Greenwashing. Wired: Cleanwashing. Grist delved into the complicated definition of renewable this year and found that your state might have a dirty energy secret. Burning garbage, tires, and chicken poop all count as renewable energy in Maryland, Ohio, and North Carolina, respectively. It’s the very definition of cleanwashing, a term coined in a Food and Water Watch report in July.

Climate gentrification (n.) The process by which the wealthy move to areas with lower risks from climate change, sometimes displacing low-income residents.

From Florida to Arizona, climate change is driving real estate markets. In Miami, for instance, a Harvard study found that properties at higher elevations were increasing in value. Residents of crazy-hot Phoenix are departing for cooler cities in Arizona like Flagstaff, driving up property prices. “A pattern of climate-driven gentrification is taking hold across the U.S., as those who are able to retreat from floods, storms, heatwaves, and wildfires shift to safer areas,” wrote the Guardian’s Oliver Milman in September. 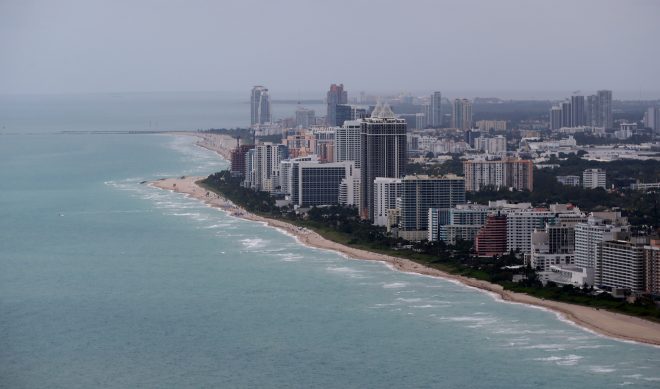 Day Zero (n.) The day when taps run dry because of water shortages.

If this sounds like the title of a cli-fi horror flick, well, it kind of is. In January, officials in Cape Town, South Africa, began counting down the days until water ran out for the 4 million people who live there. Conservation measures helped the drought-stricken city stave off Day Zero, but the new phrase is sure to stick around as long as dwindling water supplies remain a pressing concern. The Guardian reported in April that the next “‘Day Zero’ water crisis” could happen in Morocco, India, Iraq, or Spain, where reservoirs are shrinking fast.

2018 was an especially hellish year for wildfires: In November, at least 86 people were killed in the Camp Fire, the deadliest blaze in California’s history. Wildfires across the West brought some weird phenomena with them, including firenadoes and smokestorms (see below). During the Carr Fire this summer, one such twister packed 143-mph winds, equivalent to an EF-3 tornado, one likely to cause severe damage. 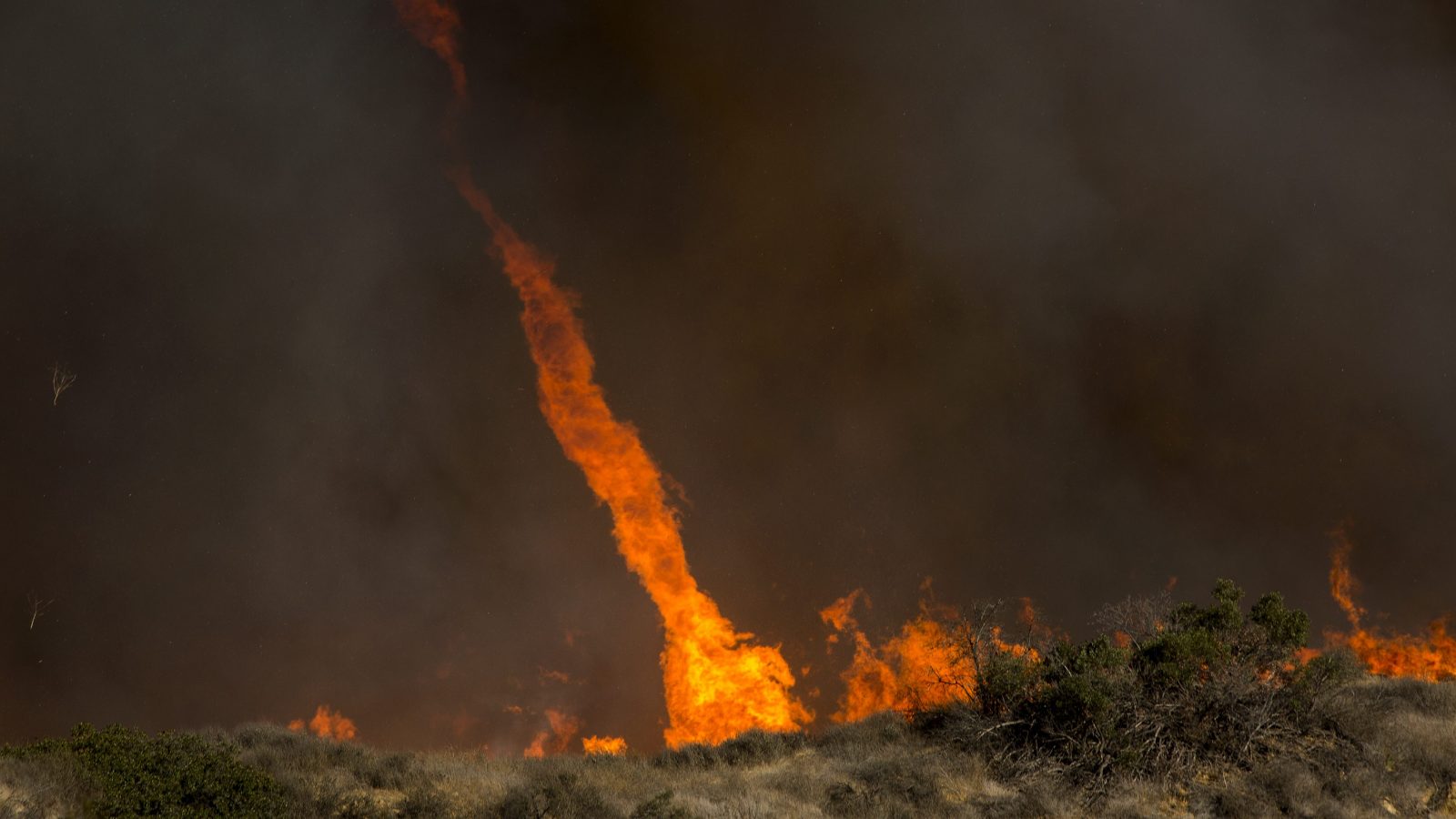 Progressive politics has a new rallying cry. The Green New Deal, backed by Representative-elect Alexandria Ocasio-Cortez and 2020 presidential hopefuls like Senator Cory Booker, promises to boost the economy and help the planet simultaneously. So far it’s still in the outline stage, but it’s based on President Franklin Roosevelt’s New Deal, the package of programs (Civilian Conservation Corps, Public Works Administration, and much else) that helped pull the U.S. out of the Great Depression. A new poll shows that 64 percent of registered Republicans and 92 percent of Democrats would support a Green New Deal, so it’s a sure bet that you’ll be hearing more about it in the new year.

Hothouse (adj.) A doomsday scenario in which climate change pushes the planet into a hot, hellish equilibrium.

Greenhouse effect? That’s so 10 years ago. Try hothouse instead. “Our analysis suggests that the Earth System may be approaching a planetary threshold that could lock in a continuing rapid pathway toward much hotter conditions — Hothouse Earth,” wrote a team of scientists in a well-circulated study published in August. Imagine that our world was hotter than anything seen in the past 1.2 million years, with no ice sheets and no Amazon rainforest, and you get the picture. As it happens, hothouse traces back to the 1400s as a shorthand for steam baths and brothels.

New abnormal (n.) The state of unpredictability and danger brought on by climate change.

The new normal tends to appear in headlines after disasters like hurricanes and wildfires. Some climate scientists disapprove of the phrase, which they say suggests that this crazy, climate-changed world we’re living in is somehow … normal. (It’s a little more complicated than that, as I learned from talking to lexicographer Kory Stamper.) As criticism of the phrase has spread, people have started to switch it up. For instance, this summer California Governor Jerry Brown referred to the devastating wildfires in his state as “the new normal.” By November, Brown was saying “the new abnormal.” 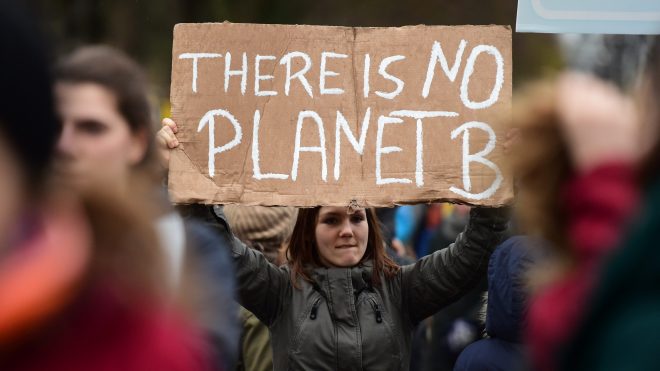 Planet B (n.) The imaginary backup planet we’ll move to when Planet A (Earth) becomes uninhabitable.

“There is no Planet B,” read the signs of marching protesters who hoped to defend science after Donald Trump’s inauguration. That line has since made its way into international politics. After a painfully awkward visit to the White House in April, France’s President Emmanuel Macron slipped it into a speech about Trump’s plan to withdraw the United States from the Paris Agreement. “By polluting the oceans, not mitigating CO2 emissions, and destroying our biodiversity, we are killing our planet,” he said. “Let us face it. There is no Planet B.”

Secret science (n.) Science based on data that isn’t public.

Remember Scott Pruitt? It feels like two years ago when the then-EPA administrator, lover of fancy lotions and expensive pens and first-class flights, finally resigned. (It happened in July.) Three months before that, Pruitt had introduced a policy to increase, erm, “transparency” and end “secret science” (a pet phrase of Lamar Smith, a Republican representative from Texas). The rule would have stopped EPA regulators from using decades of research about the damage air pollution and pesticides cause to public health. It’s now on hold, but the acting EPA administrator, Andrew Wheeler, told the Hill he plans to move forward to “finalize” the rule next year.

You’ve heard of snowstorms and thunderstorms, so why not a smokestorm? This summer, wildfires filled cities up and down the West Coast with cinder-filled smoke as thick as fog. That hazardous air is actually the deadliest public health threat from wildfires. When the tiny, ashy particles get into people’s lungs or blood vessels, they can lead to asthma or heart disease. Cliff Mass, a University of Washington atmospheric science professor who has been criticized for his views on climate change, coined the term in a blog post this summer to raise awareness about the dangers of smoky air. 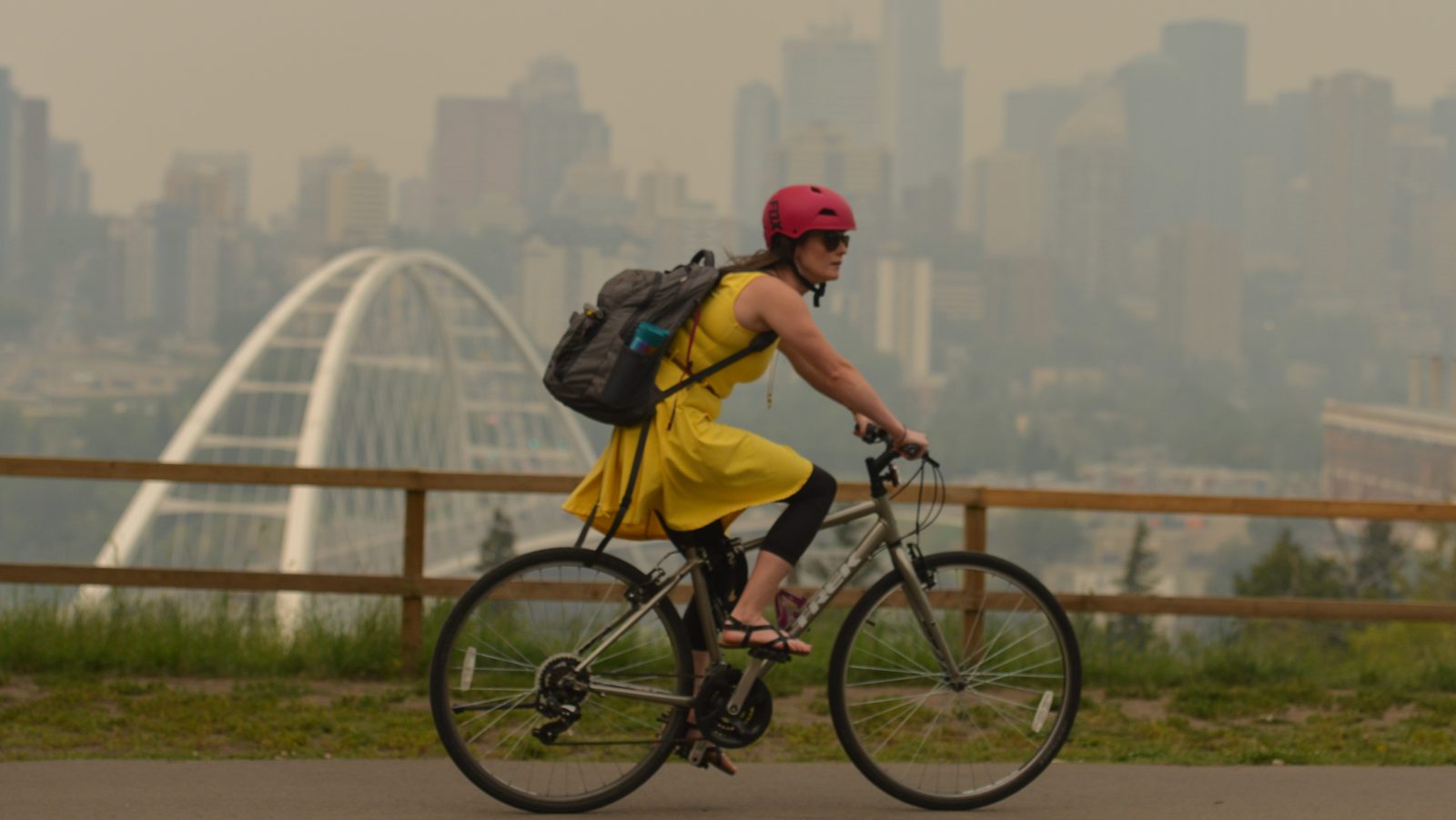 Zero Hour (n.) The breaking point at which decisive climate action must be taken.

Time’s up! Zero hour, the time when a planned military operation is scheduled to begin, has taken on a new meaning. In 2017, a young climate activist named Jamie Margolin (15 years old at the time) founded an organization named after the concept. And in July, Zero Hour launched a climate march led by young people of color on the National Mall. “We want youth talking to politicians, lobbying, going to town halls,” Margolin told Grist for a documentary about her work. “We’re still a bunch of broke high schoolers, but we have so much more than we did last year.”