More than 3,000 demonstrators in San Francisco have created what’s thought to be the largest street mural ever made. On Saturday, the 2,500-foot-long, 50-foot-wide mural turned five blocks of city streets into scenes of community-proposed solutions for a warming world.

What’s more, the protesters didn’t have a permit to paint the streets — so a group of indigenous-led grandmothers faced off with police to block roads for five hours while the muralists completed their work. With the grannies from the Society of Fearless Grandmothers holding down ground, none of the protesters were arrested.

“You have to believe in a little magic and imagination to build the future that we want,” says Cata Elisabeth-Romo, an artist and one of the lead coordinators for the mural project.

San Francisco’s demonstration was part of a recent, international upwelling of art and activism. Last week, activists took to the streets in 91 countries with picket signs and paint for the “Rise for Climate, Jobs, and Justice” marches organized by 350.org and dozens of partners. The demonstrations came ahead of the much-anticipated Global Climate Action Summit that will begin in San Francisco on Wednesday. 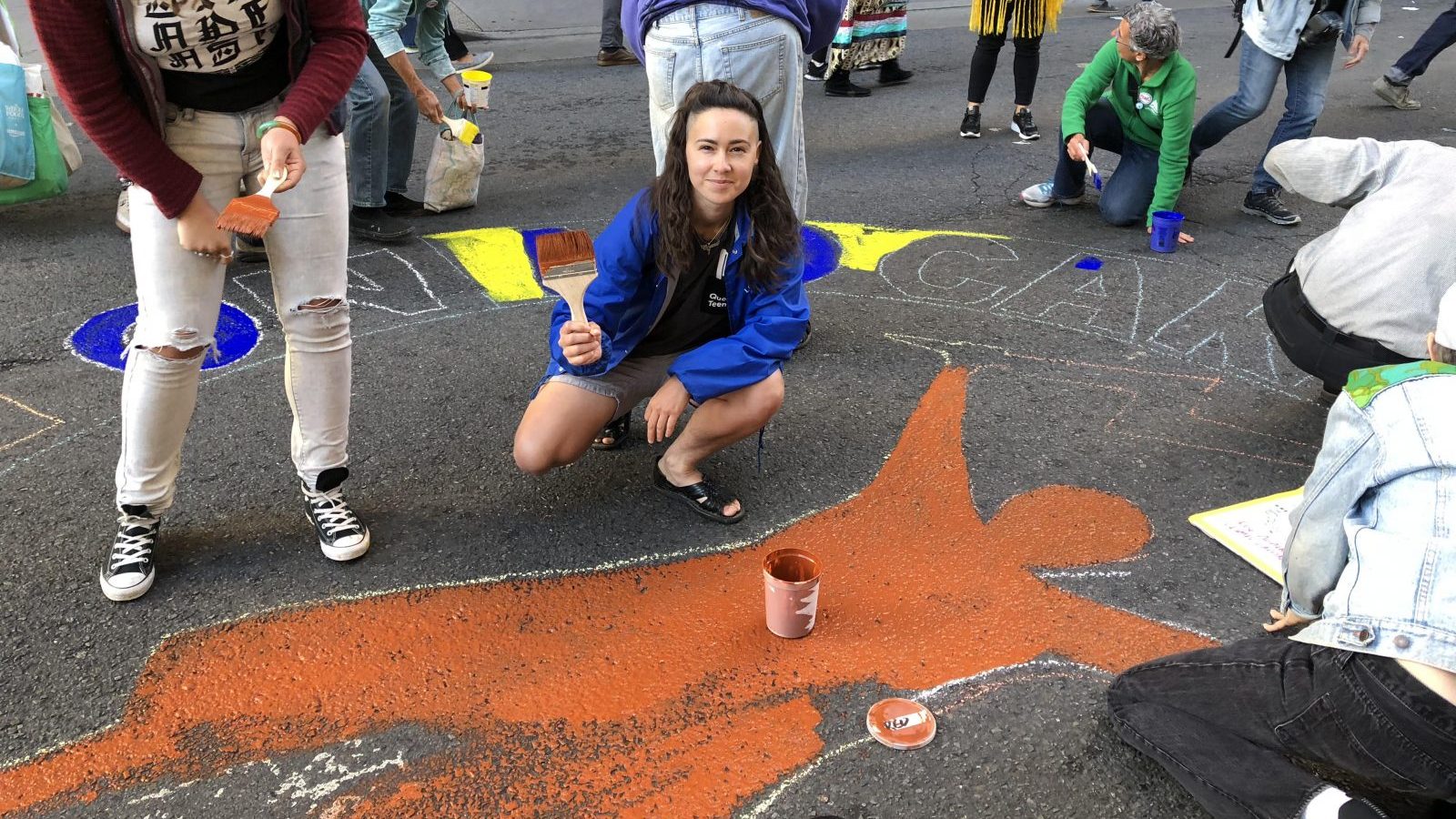 The summit is spearheaded by California Governor Jerry Brown and will bring together states, cities, businesses, and community groups to discuss how to achieve climate goals set by the Paris Agreement.

The San Francisco mural stitched together 50 scenes depicting solutions to climate injustices, each put together by a different community group. Indigenous artist and ecologist Edward Willie designed a border around the mural unifying all 50 scenes. 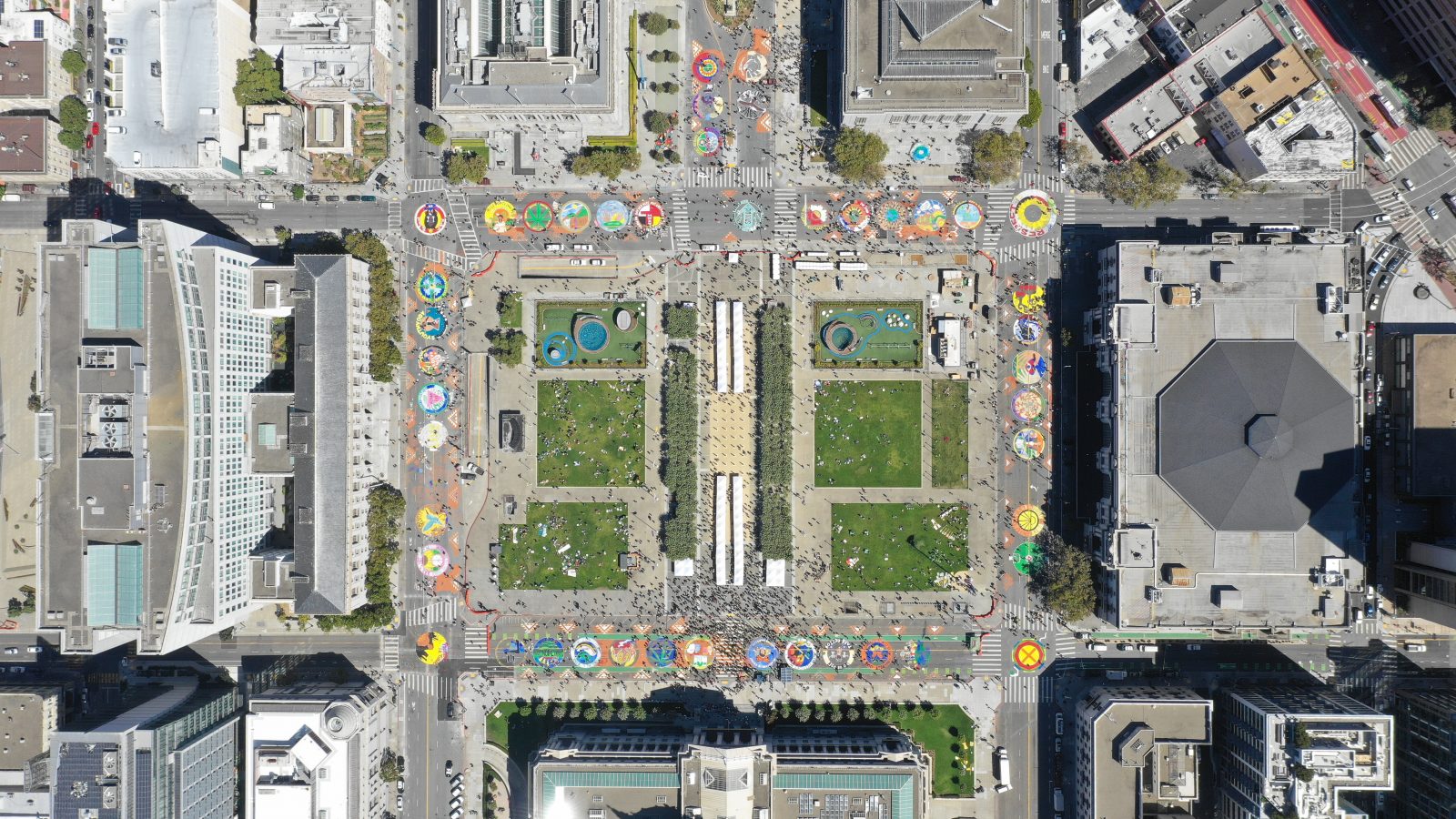 The entire mural is temporary. As of Sunday night, four of the five blocks were still painted. The street art was made using charcoal from areas impacted by the recent devastating wildfires, along with tempera paint and raw clay sourced just outside of San Francisco.

Artist Nityalila Saulo designed the mural for the interfaith contingent, which included 2,000 footsteps surrounding the word “Live.” The footprints “remind us of the prints we leave behind as we live on this earth. It is meant to inspire us to value the choices we make every day,” she wrote on Instagram.

The artists’ and activists’ demands include racial and economic justice, and an end to fossil fuel production in favor of a transition to 100 percent renewable energy. From city to city, locals used creative expression to highlight their own priorities.

In New York on Thursday, the sea of protesters included artists and performers in costumes depicting creatures from the sea. No Longer Empty, an NYC group that curates exhibitions to spark community conversations in unconventional spaces, dressed as coral, jellyfish, and a leatherback turtle. It’s all part of a larger work by artist Laura Anderson Barbata called “Intervention: Ocean Blues.”

“This work addresses the urgent need to transform our decisions, to influence policy, and to bring awareness to the importance of the ocean’s health and our dependency on it,” Anderson Barbata told Grist. 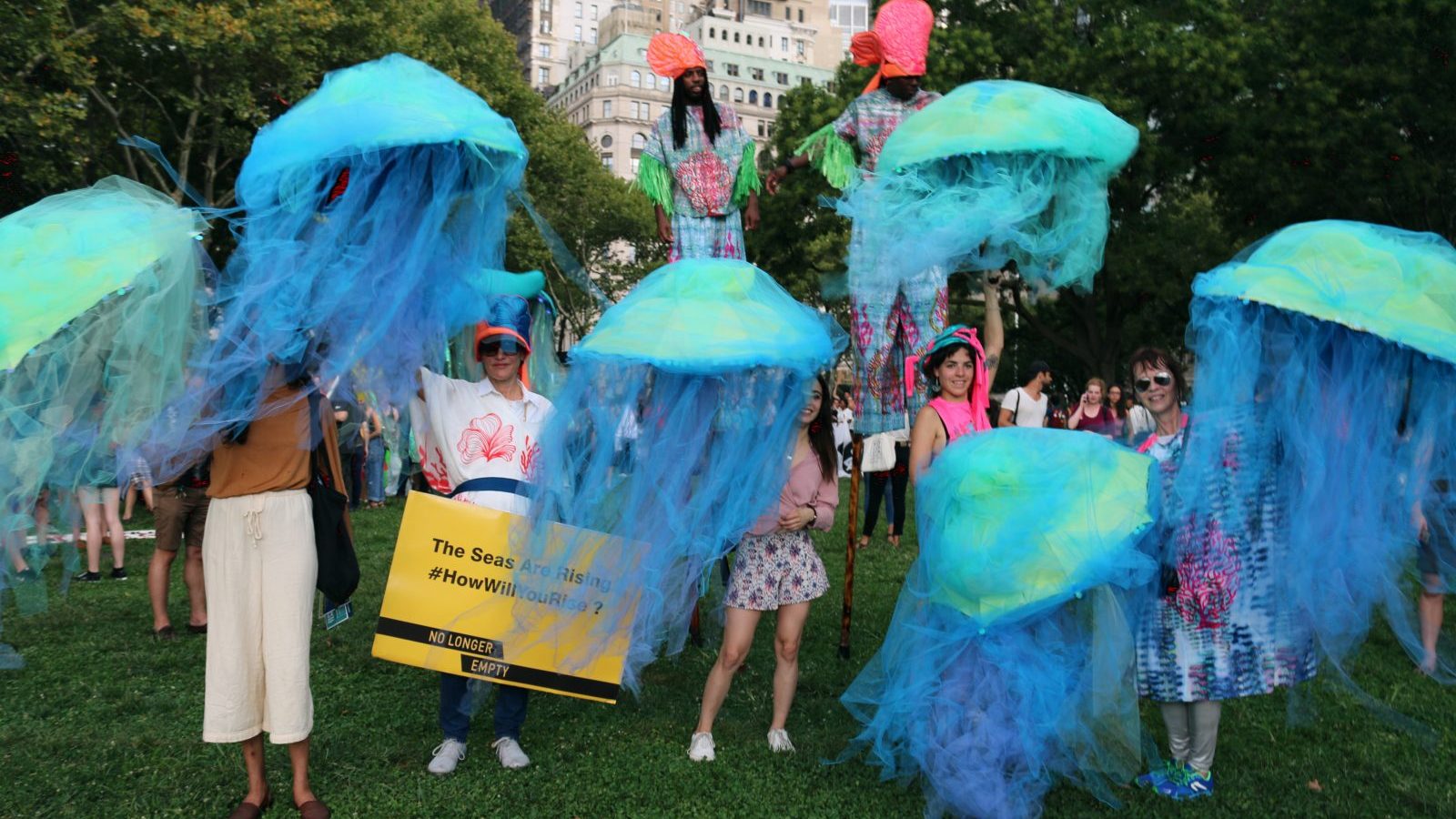 In New Orleans, demonstrators used banners to call attention to Louisiana’s Cancer Alley, an industrial corridor that stretches from NOLA to Baton Rouge. Organizers say that on top of the plants and refineries in the area, the planned Bayou Bridge pipeline poses another health threat to residents in St. James Parish, where the march began. 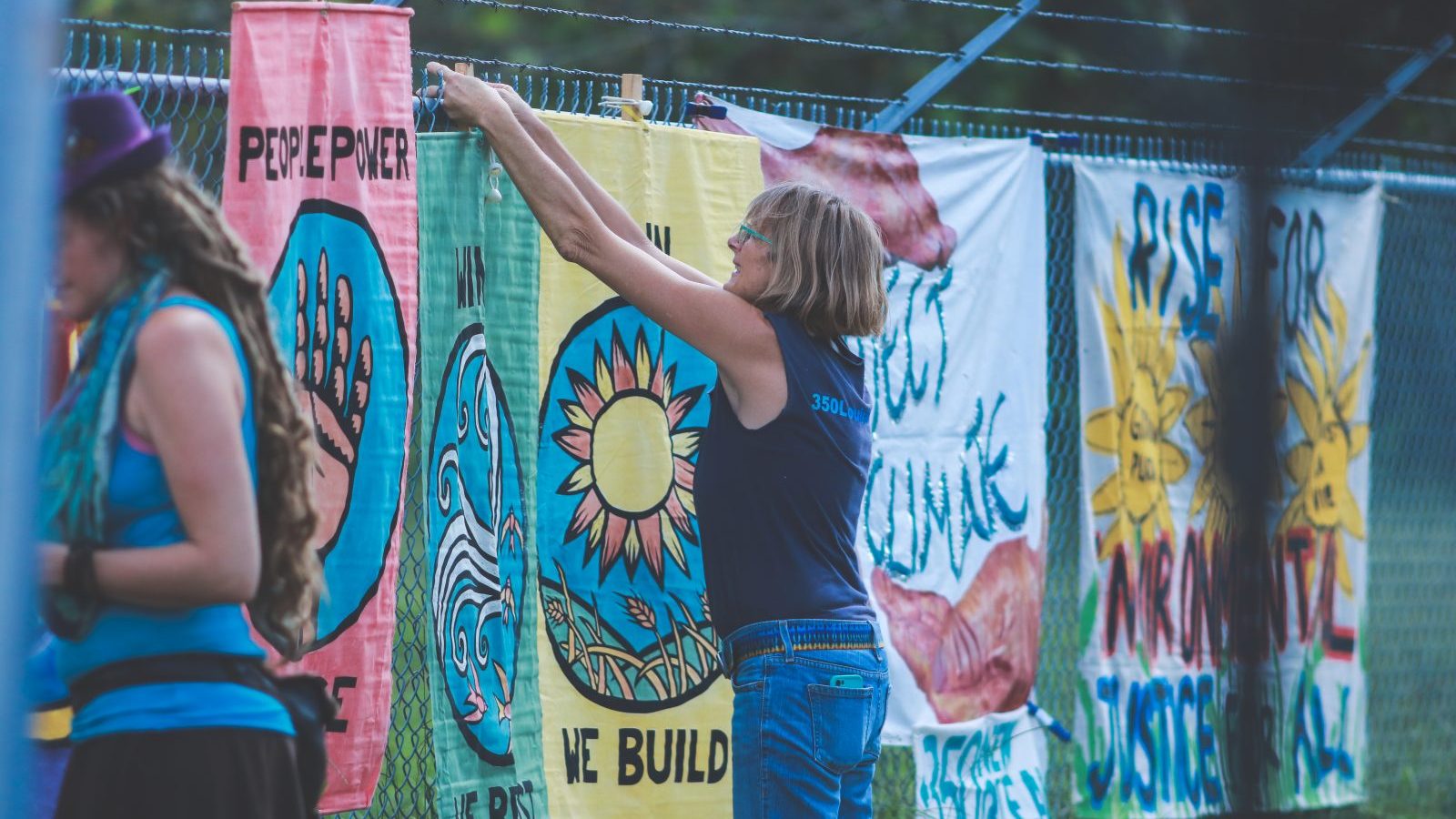 350 commissioned protest artwork from artists in six different continents that demonstrators around the world could download and use in their campaigns. 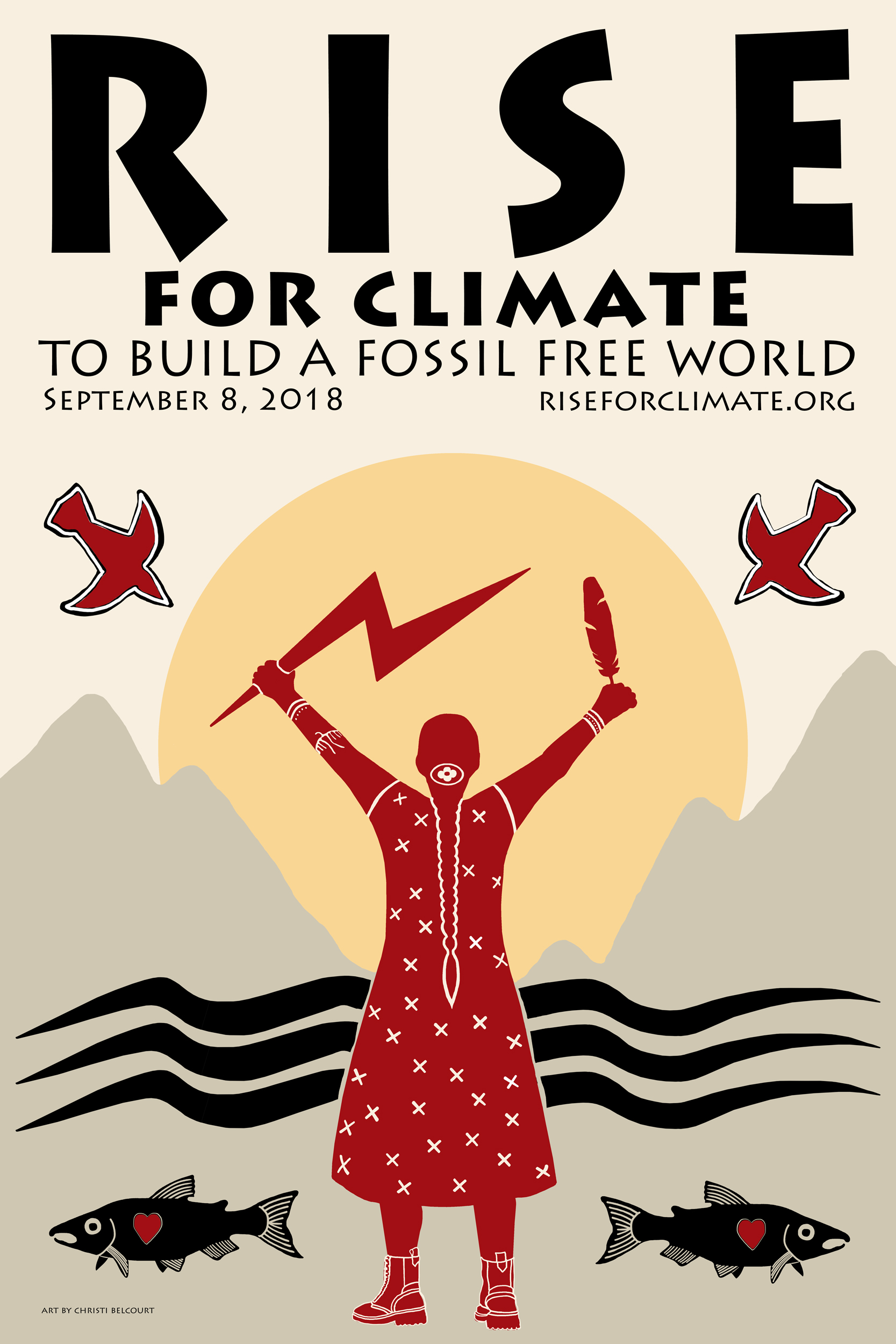 Christi Belcourt, a renowned Michif visual artist who traces her lineage to the Manitou Sakhigan of Alberta, Canada, contributed an image depicting a woman facing water, wielding lightning in one hand and holding a feather in the other. Belcourt has a message to accompany her artwork:

With their art, Belcourt and others are mounting a creative defense against climate change.