Facing allegations of sexual harassment and abuse from multiple women, Eric Schneiderman abruptly resigned as New York State’s attorney general in May. His ignominious exit meant that one of President Donald Trump’s chief antagonists had vanished from the political stage.

The New York AG’s office has proven to be a persistent thorn in the administration’s side — particularly when it comes to safeguarding environmental regulations. Starting on Trump’s first day in office, Schneiderman and his colleagues launched dozens of legal assaults against proposed rollbacks of Obama-era water, air, and methane rules. The former attorney general was also the first to launch an investigation into Big Oil’s knowledge of climate change and its misinformation campaigns to protect profits. That move sparked a wave of so-called “climate liability” lawsuits across the country. In all, the New York AG’s office has filed 55 legal actions against the administration; only the state of California has filed as many.

When Schneiderman stepped down, he kicked off a whirlwind race to elect his successor. Four Democratic candidates are vying to face Republican Keith Wofford in the general election — though the winner of Thursday’s primary* is expected to become AG in the deep blue state. Two have vowed to take up Schneiderman’s considerable environmental mantle, and each already has a noteworthy environmental victory under her belt: New York City’s public advocate Letitia “Tish” James, who helped lead a movement to divest the metropolis’ pension funds from the fossil fuel industry; and Fordham University law professor Zephyr Teachout, who was instrumental in pushing the state to ban fracking. Both candidates have promised to play hardball with the Trump administration, crack down on polluters, and bring justice to at-risk New Yorkers facing environmental hardship. 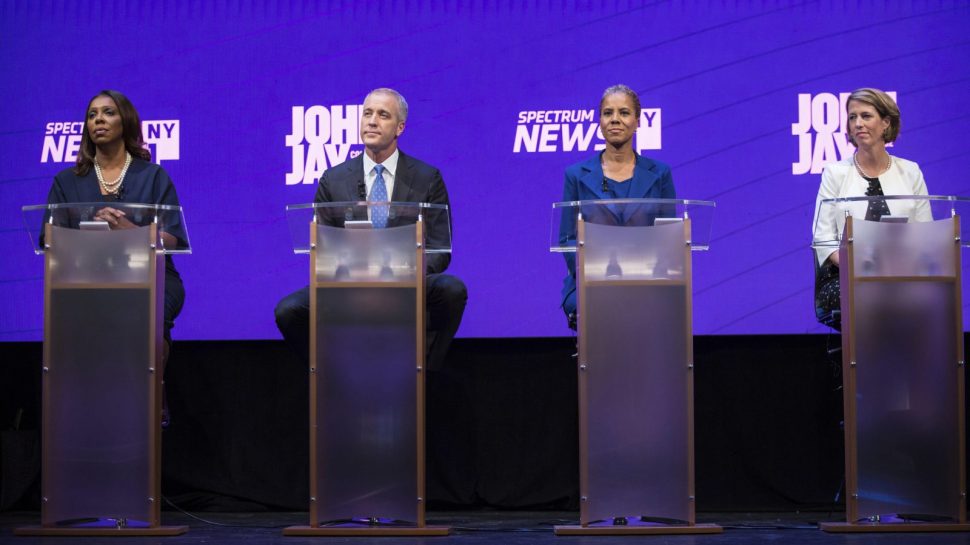 It has become clear that New York’s chief law enforcement officer isn’t just another state-level representative, but one of the last lines of defense between the Trump administration and the environment. “There is no more important elected official in the country in terms of holding the Trump administration accountable,” says Bob Ferguson, Washington State’s attorney general, whose office has filed 32 lawsuits against Trump.

Given that importance, the race to replace Schneiderman is garnering similar attention to New York’s gubernatorial tilt between two-term governor Andrew Cuomo and Cynthia Nixon, an activist and former star of the HBO show Sex and the City. And in the state that saw the shock primary victory of Congressional candidate Alexandria Ocasio-Cortez, the Democratic electorate has the opportunity to determine the future of the political left as it chooses between those anointed by the New York party’s establishment (Cuomo and James) and those favored by an invigorated progressive wing (Nixon and Teachout).

While James and Teachout are hogging the headlines, they face two other opponents in Tuesday’s Democratic primary: Leecia Eve and Sean Patrick Maloney. A former aide to Cuomo, Hillary Clinton, and Joe Biden, Eve is a Verizon executive, who, like the other women in the race, has vowed to continue Schneiderman’s legal assault on Trump. Maloney, who represents an Upstate New York district in Congress, is running in two races simultaneously, as he’s also vying to retain his congressional seat. The representative has said little about his environmental agenda, but he has voted green fairly reliably during his tenure in Congress. (Though he did vote in support of the Keystone XL pipeline in 2014.) Adding to Maloney’s already full plate is a lawsuit brought by Teachout, who last week sued his campaign for using funds raised for his congressional bid on the AG race.

James first appeared on New York City’s political scene when she won a city council seat 15 years ago. In 2013, she became public advocate — and the first black woman to hold citywide public office. While the role of public advocate doesn’t exactly come with oodles of political clout — she can introduce legislation but can’t vote on it — the post is often used as a springboard for bigger political aspirations. Bill de Blasio held the post for the four years immediately before taking over as New York City’s mayor. Before James announced plans to run for AG in May, she had her eye on following in de Blasio’s footsteps.

James has quietly used her position to establish herself as an environmental watchdog. Last fall, she organized a first-of-its-kind public hearing on climate change, featuring indigenous rights activists, Hurricane Sandy survivors, and youth leaders. When de Blasio announced his plan to pull fossil fuel investments from the city’s five public pensions in January, James was right there alongside him.

Now she’s ready to take the divestment message statewide — a position she staked after seeing the public health consequences that pollution brought to constituents of her north Brooklyn city council district. “I’ve seen the devastating impacts,” she says. “In my former district, I had to bury two children that died from asthma attacks. So it’s personal.” 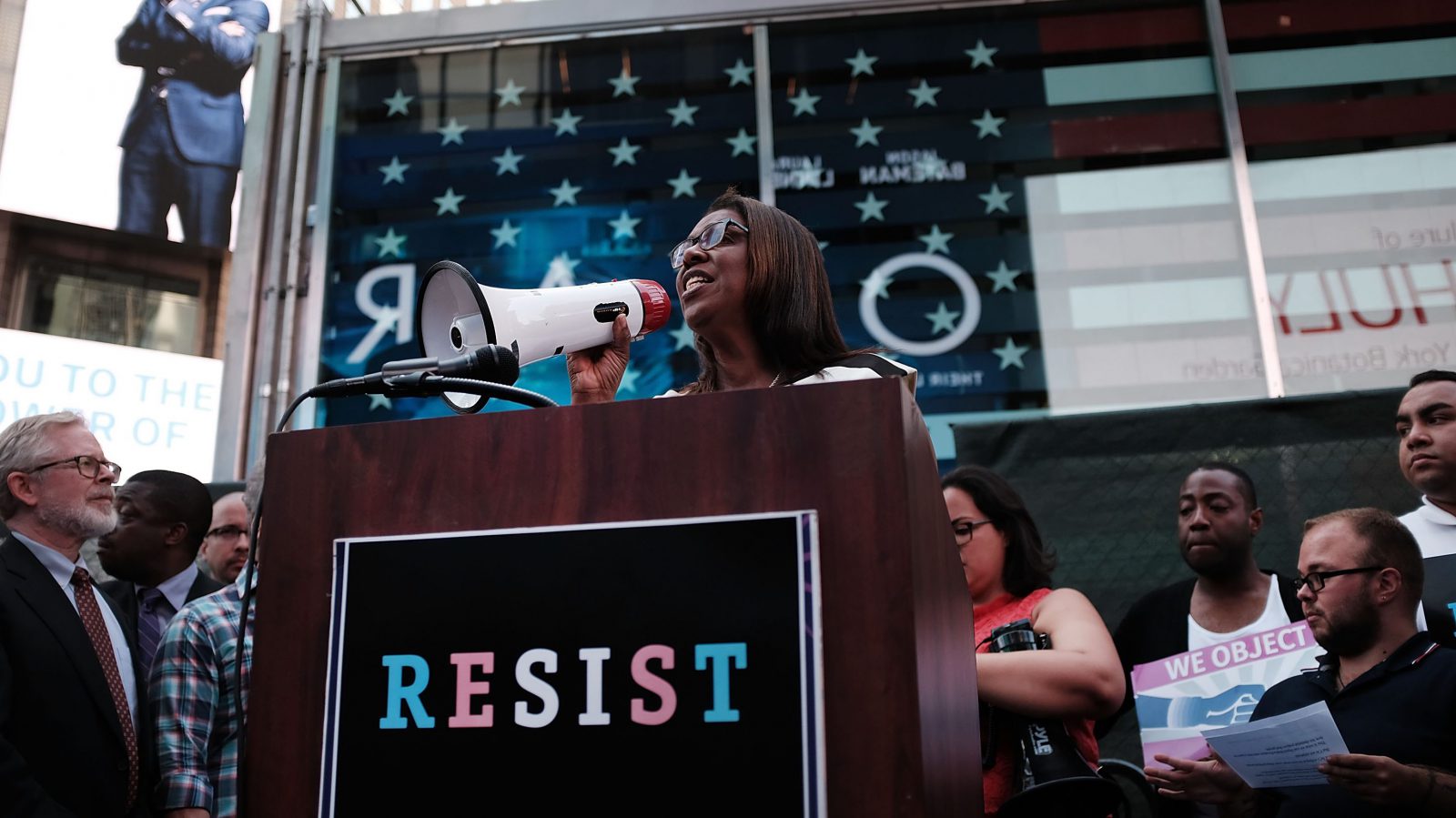 James attributes those deaths to poor air quality. And efforts to divest, she says, bring the city — as they could the state — a significant step closer to a cleaner environment for all its residents. She’s especially passionate about taking legal action to combat instances where environmental burdens fall heaviest on communities of color and “exacerbate racial disparities.”

When James first entered the race in May, it would have been hard to imagine any candidate out-maneuvering her to her left. And yet, Teachout is now on that flank.

During her unsuccessful run for governor in 2014, Teachout challenged Governor Cuomo on his soft stance on fracking for natural gas in shale formations in the southern region of New York State. Teachout’s influence — and the sizeable chunk of votes she received in a losing effort — was instrumental in compelling Cuomo to forbid the practice a month after winning reelection. Teachout calls the achievement “arguably the greatest environmental victory in the last few decades.”

Teachout tells Grist that her history of engaging with grassroots organizers positions her as a natural leader in the climate fight. She has been involved in environmental activism for nearly 30 years, beginning when she canvassed in California at the age of 17, soliciting support for Superfund cleanup efforts.

Teachout is still thinking about Superfund sites. She points to the Stewart Air National Guard Base, which earned a state Superfund designation in 2016. Officials discovered that foams used in Department of Defense operations had been contaminating the drinking supply of Newburgh for years (it’s the same Upstate town where her opponent Sean Patrick Maloney has his in-state office). But the Pentagon has argued that cleaning up the site, which it leased from the state, isn’t its responsibility.

“I have called out Cuomo to say he should give a referral so the attorney general can really finally make the Department of Defense pay for the full costs of cleanup,” Teachout says. “There are three other candidates in the race. I asked them to join me. None of them have.”

While James and Teachout’s platforms don’t differ widely, the law professor has been able to paint her opponent as a member of the Democratic party establishment thanks to the public advocate’s ties to Cuomo. (James received the current governor’s endorsement soon after she announced her candidacy.) While her opponents have worked to create distance between themselves and the governor — who in March had a close aide found guilty of corruption — James has moved toward him.

Yoking herself to the Democratic machine has led James into a quandary. While James says she is intent on depriving fossil fuel companies of public money from New York State, it’s Teachout who is on the record as shunning corporate donations — the only attorney general candidate who has made that pledge.

Meanwhile, James is accepting donations from corporations — including companies that operate nursing homes and rehabilitation centers. And her campaign has called out Teachout for allegedly accepting a small fraction of her funds from corporate entities, despite vows to the contrary. “I do not want to be disadvantaged,” James says of her funding strategy. “I do not want to unilaterally disarm.” 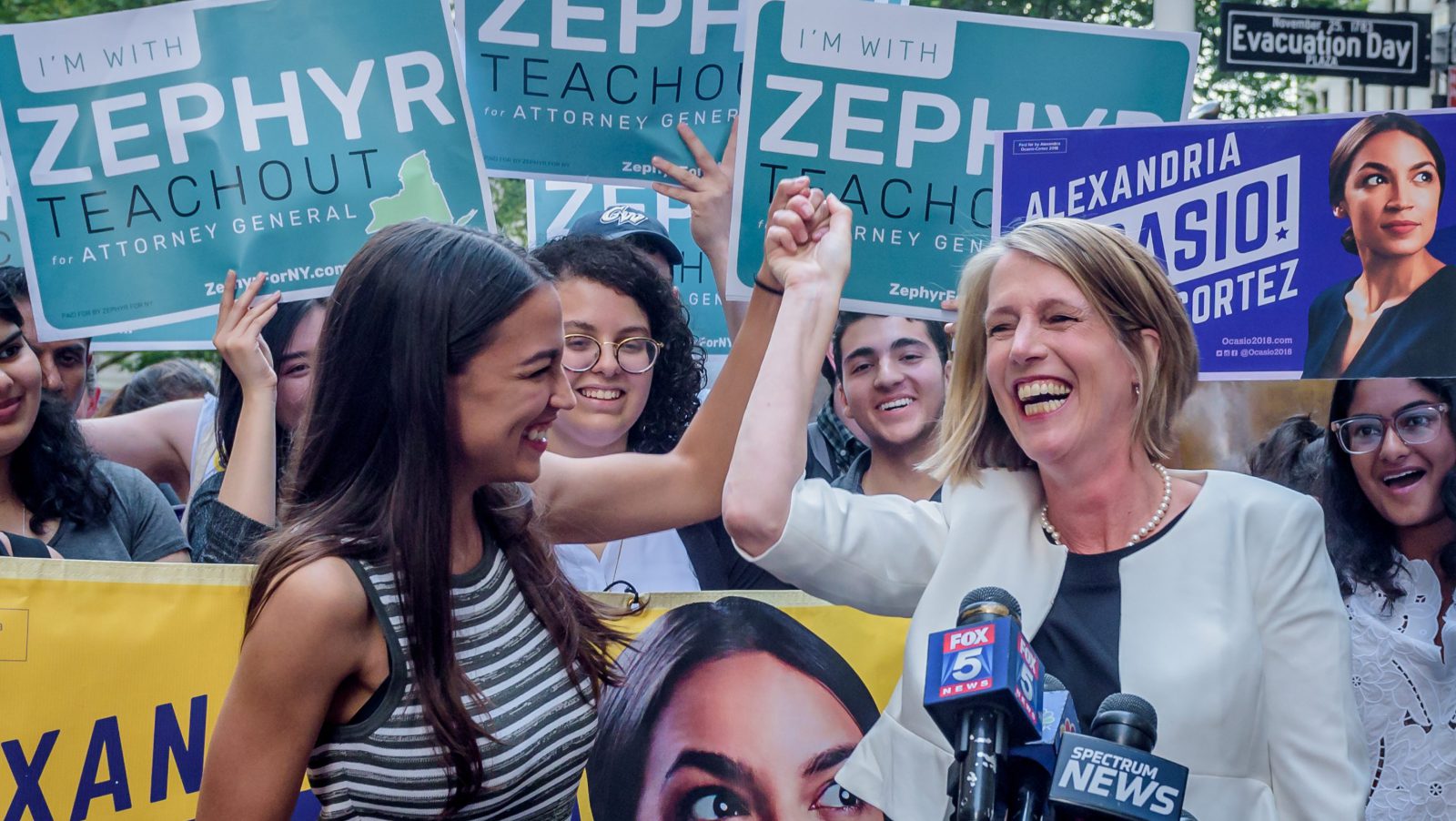 While James is ahead in recent polls, Teachout enjoys more name recognition beyond New York City, thanks to her gubernatorial challenge of Cuomo. The New York Times recently gave her its endorsement among a “refreshingly strong” Democratic primary field. Its editorial board called Teachout “an independent-minded lawyer unusually well prepared to curb abuses of power and restore integrity and pride to this office.” In the wake of receiving the Times’ support, at the final AG debate on September 6, Teachout had to weather a barrage of attacks from all three of her competitors.

In its mention of James, the Times noted that the public advocate “has embraced political contributions from donors to Mr. Cuomo.” When asked whether she feels as though Teachout’s contrast to her is similar to the distinction between recent progressive insurgents, like Alexandria Ocasio-Cortez and 2016 Grist 50 member Ayanna Pressley, and their establishment opponents, James pushes back. “I’ve been a progressive long before it became popular,” she says. “For me, it’s really not about labels. It’s about the ability to get things done.”

Whether choices related to campaign finance will make or break one of these candidates is for New York’s electorate to decide. What’s certain is whomever gets the position will soon become an invaluable link in a legal chain of resistance against the Trump administration.

“There’s no space for egos among the Democratic attorneys general right now,” Ferguson says. “We work together, we’re in it together. It’s not about any one AG taking on Trump. We all have key roles to play.”